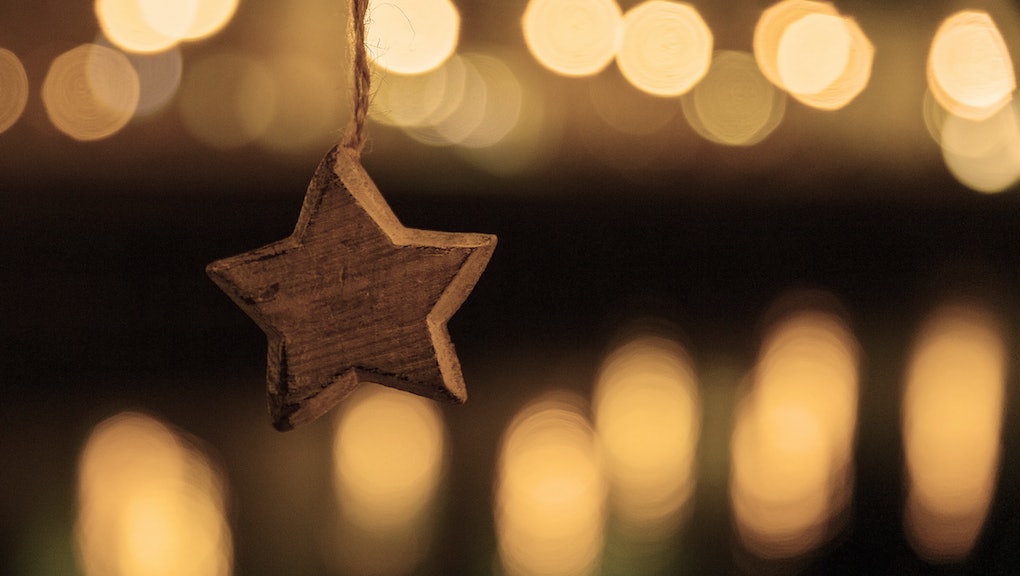 The winter solstice marks the shortest day of the year and is also traditionally understood to be the beginning of winter. This year, the solstice will occur on Dec. 21st, and according to a timetable created by the Astronomical Applications Department of the U.S. Naval Observatory, people in New York will only experience 9 hours and 15 minutes of daylight all day. Those in the U.K. will only have 7 hours and 49 minutes of daylight.

The solstice (also known as Yule) has been celebrated as a pagan holiday for thousands of years, and in all actuality, many of the Christmas traditions that seem to be so tightly intertwined with the Christian holiday itself are actually "borrowed" from the pagans. (And by borrowed, we mean condemned and then eventually repurposed). Want to find out which of your favorite Christmas traditions are actually steeped in the pagan celebration of the solstice?

The Christmas tree or the Yule tree?

The Christmas tree actually has its origins in pagan worship. According to Chron, "The Yule tree has been in traditions thousands of years before it became known as the Christmas tree in the 1840s." Evergreen trees were seen as a symbol of continual life, especially at the time of the solstice. Sometimes, these trees were even decorated with trinkets that symbolized the person's wishes for the New Year (such as coins, lights and corn, meant to bring wealth, sunlight and a bountiful harvest, respectively).

Decorating and/or bringing a tree into one's home to celebrate the holiday was frowned upon in "every Christian denomination" until Queen Victoria pulled a 180 on the whole thing. She wanted to have one for herself after she came back from a trip to Germany, so everyone else had to adjust, which, if you think about it, is a pretty queenly move.

Holly and mistletoe: symbols of rebirth

Mistletoe, holly, and pretty much every evergreen plant you might associate with Christmas was actually a solstice tradition first. These were the plants that typically thrived during the winter months, and because it was often a pagan tradition to bring in flowers and plants from outside to decorate one's home during every holiday, these were the ones most associated with the winter solstice.

Mistletoe is especially steeped in pagan ritual, as it was often used by ancient Celtic as a symbol of sexuality, fertility and abundance. But the reason we kiss under it goes back to Scandinavian mythology according to the Vancouver Sun. Baldur, the son of Odin and Frigg, was so beloved that his mother made everything — including trees, stones, elements and sicknesses — promise that it would not harm him. However, Loki, god of fire, found that she had forgotten to ask mistletoe and killed Baldur with a dart fashioned with the poisonous plant (we assume for the lulz). Afterward, Frigg vowed that the plant should never again be used as a weapon and that she would kiss anyone who passed under it. So, like with many things, kissing under the mistletoe is Loki's fault.

You kind of had to figure that yule logs were, in fact, named after the Yule celebration of the solstice. According to the International Business Times, "Some Wiccans welcome the new solar year with light," including candles and yule logs. The burning of the yule log can take place in one's fireplace at home or in a large bonfire, which harkens back to ancient pagan rituals celebrating Yule.

Eat, drink and eat some more

Funnily enough, even though everyone associates Christmas with the overindulgence of food and drink, this is another tradition borrowed from the ancient pagan holiday. People would feast during the solstice, a time when food was actually scarce, in order to show they had hope for an abundance of food in the new year. It was also common to overindulge because the winter months in Europe were brutally cold, and everyone was depressed and bored. Sounds like Christmas to us!

In addition, "elaborate Yuletide activities" among the nobles were common in the Middle Ages, and sometimes, the wealthy would actually compete with one another over who could be more charitable. This meant, of course, that the poor ate well and received gifts, which also meant everybody had a pretty good time.

While it is difficult to imagine Christmas without the glut of gift-giving and receiving, this particular tradition used to be frowned upon and may actually have its origins in the ancient Roman holiday of Saturnalia. Imitation fruit, dolls and candles were often given as gifts, all three symbolizing different aspects of the holiday. Candles, when given during the festival, were actually meant to represent the bonfires or Yule log associated with the solstice (and dolls apparently were for human sacrifice, FYI).

However, those who celebrated the solstice started giving gifts around the holiday that symbolized their love and worship of nature, including "clove spiked apples and oranges." According to Live Science, while it was more common to give gifts around New Years until the 1800s, we now give gifts at Christmastime, possibly as a change made to reflect the solstice.

In truth, many of the most well-known Christmas traditions come from the celebration of Yule or the winter solstice. So, if you're inclined, you might want to learn more about the holiday itself in order to better understand the roots of these customs. Have a happy solstice!