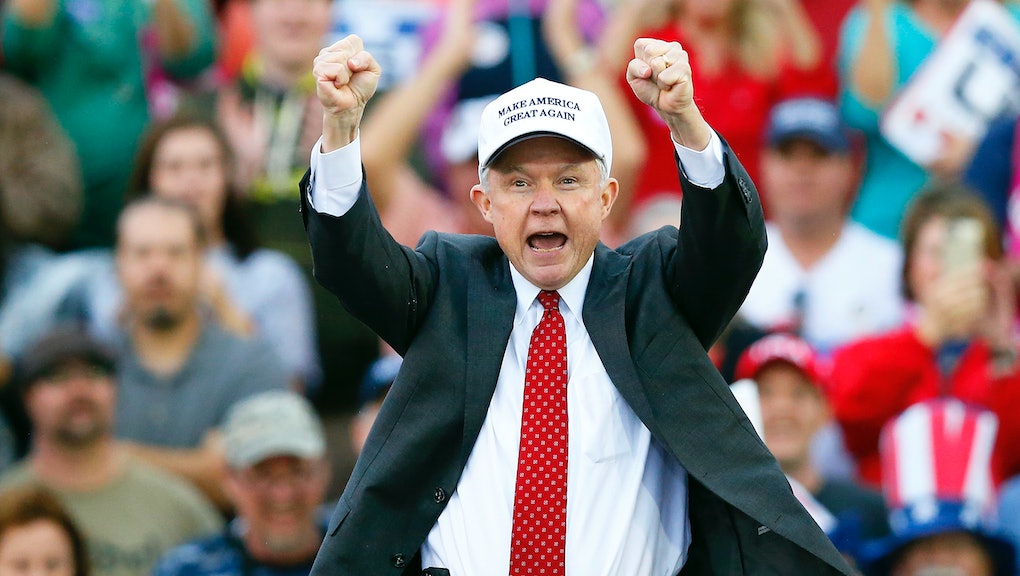 Jeff Sessions and Marijuana: What has Trump's attorney general said about legal pot?

The votes came as part of a larger wave of popularity for marijuana legalization, which is now legal for recreational use in eight states and the District of Columbia (medical marijuana is legal in 28). A Gallup poll released in October revealed that 60% of Americans are in now favor of legalization — a far higher number than the 12% in favor when Gallup first polled on legalization in 1969. Furthermore, polls released in August 2015 found 64% of Iowa GOP voters and 67% of New Hampshire GOP voters believed states should be able to enforce marijuana legalization without federal interference.

American voters, however, also voted on Nov. 8 for Donald Trump. While the president-elect has largely voiced his support for medical marijuana and states' rights, he may have also issued the death knell for marijuana legalization by appointing Jeff Sessions as attorney general.

As attorney general, Sessions will now have the power over federal drug policies — which, despite the recent surge of state legalizations, still classify marijuana as a Schedule 1 drug.

Given Sessions' longstanding anti-drug stance — a "ridiculous anti-drug crusade," as the Washington Post put it — his appointment has legalization proponents and those in the marijuana industry worried.

"Jeff Sessions is a drug war dinosaur, which is the last thing the nation needs now," said Ethan Nadelmann of the Drug Policy Alliance in a statement, the Washington Post reported. "Those who counted on Donald Trump's reassurance that marijuana reforms 'should be a state issue' will be sorely disappointed."

Sessions, a U.S. senator representing Alabama, has made a number of statements on marijuana — and none have been in favor of it.

In April, Sessions spoke out against the drug at a Senate hearing, in which he declared that "good people don't smoke marijuana."

"We need grown-ups in charge in Washington to say marijuana is not the kind of thing that ought to be legalized, it ought not to be minimized, that it's in fact a very real danger," Sessions said at the hearing.

"I think one of [President Barack Obama's] great failures, it's obvious to me, is his lax treatment in comments on marijuana," Sessions continued. "It reverses 20 years almost of hostility to drugs that began really when Nancy Reagan started 'Just Say No.'"

Noting that the Department of Justice — which Sessions is now set to lead — "needs to be clearer" on the issue of marijuana legalization, Sessions said at the hearing: "I can't tell you how concerning it is for me emotionally and personally to see the possibility that we would reverse the progress that we've made and let it slip away from us. Lives will be impacted, families will be broken up, children will be damaged."

In his anti-drug rhetoric, Sessions cited statistics showing more drivers were testing positive for marijuana component THC in certain states, and perpetuated the pervasive belief that marijuana is a "gateway" for harder drugs like cocaine or heroin.

The trouble is, that just isn't true. A 2015 study conducted by the U.S. Department of Transportation determined that there was no increased crash risk associated with marijuana use after controlling the data for demographics and alcohol use. The "gateway drug" myth, meanwhile, was debunked as far back as 1999 in a Congress-commissioned report on the dangers of medical marijuana. The report, conducted by the Institute of Medicine of the National Academy of Sciences, notes:

Sessions' statements on marijuana go back far earlier than April, however. In the 1980s, the New York Times noted, Sessions jokingly said that he thought the Ku Klux Klan "was OK until I found out they smoked pot."

What this means for marijuana legalization

As attorney general, Sessions now has the opportunity to take action regarding the marijuana legislation he calls a "tragic mistake."

Marijuana legalization in states is currently not formally protected by the law, but rather by two memos issued by the Department of Justice: the Ogden memo, which allows for those using and distributing medical marijuana to not face federal prosecution, and the Cole memo, which told U.S. attorneys to not prosecute marijuana use that are in accordance with state legalization measures. Sessions now has the power to rescind them both.

State marijuana legalization rights are also protected by the Rohrabacher-Forr amendment, which prohibits the DEA and Department of Justice from using funds to prosecute or target medical marijuana businesses that are legal under state laws. However, this amendment is attached to the annual appropriations bill, which has to be renewed each year — and could easily be changed in the incoming Republican-controlled Congress.

"If I were a betting man, I'd be shorting the marijuana industry," Kevin Sabet, president of anti-legalization group Smart Approaches to Marijuana, told NPR. "Generally markets don't like uncertainty, and [Trump's attorney general] announcement has made a murky issue even more unclear."