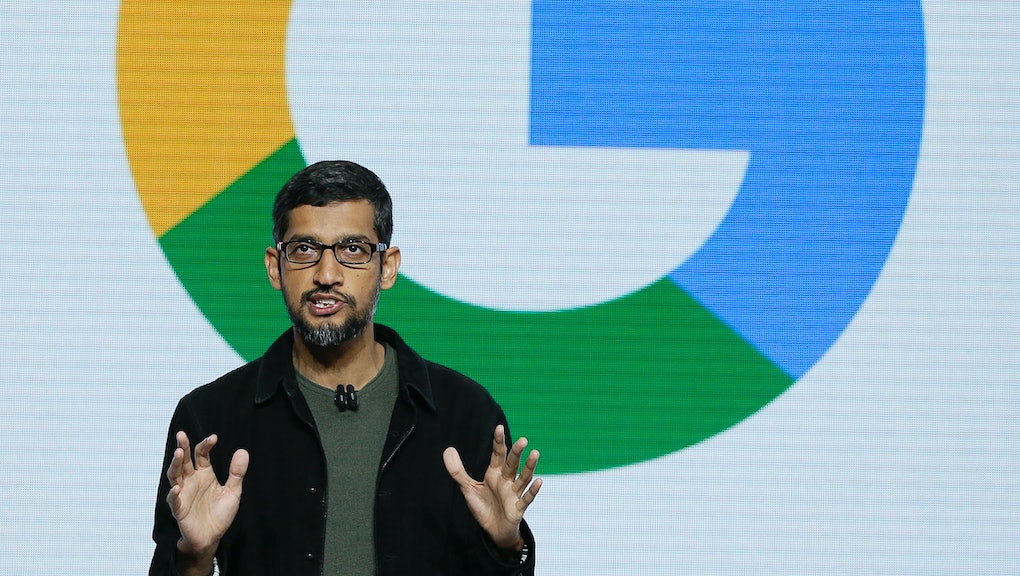 The 10 most damning allegations from the new Google lawsuit

A lawsuit filed on Monday by a former Googler going by "John Doe" paints an interesting picture of the tech giant's internal work culture. The complaint itself, fit with some colorful commentary — "Sunlight remains the best disinfectant. Google must let the sun shine in" — is damning, if true.

Google claimed in a statement to Mic that it is false. "We will defend this suit vigorously because it is baseless," a spokesperson said in an email.

"There's nothing baseless about the lawsuit," an attorney for John Doe told Mic in a phone call. "The complaint accurately quotes actual Google policies."

Until more facts come to light, it's John Doe's word against a powerful corporation's. But if the alleged claims hold water, they reveal Google has a more cloak-and-dagger environment than its self-proclaimed "open culture often associated with startups."

Let's take a look at some of Doe's most condemnatory allegations, per the lawsuit.

As a condition of employment, Defendant Google, Inc. requires all of its employees, including supervisors and managers (collectively 'Googlers'), to comply with illegal confidentiality agreements, policies, guidelines and practices. These illegal policies and agreements restrict the Googlers' right to speak, right to work and right to whistle-blow. The policies prohibit Googlers from speaking plainly — even internally — about illegal conduct or dangerous product defects, because such statements might one day be subject to discovery in litigation or sought by the government.

Googlers can't tell outside parties about their salary or working conditions

For example, contrary to its 'confidential' Code of Conduct Policy, Google's 'Employee Communication Policy' states that '[n]othing in this or other Google policies is intended to limit employees' rights to discuss with other employees the terms, wages and working conditions of their employment, or communicate with a government agency regarding violations of the law, as warranted and as protected by the applicable law.' Regardless of Google's alleged 'intent,' the plain language of the policies is to the contrary. Also, because this savings clause applies only to communications within Google, it is crystal clear that Google affirmatively intends to prohibit communications about wages and working conditions with those outside Google. Moreover, this savings clause extends only to communications that are both 'warranted' and 'protected by applicable law.' However, Google's policies, training programs and enforcement mechanisms all instruct employees that the disclosure of 'confidential information' is never warranted.

A former Googler was, allegedly, wrongfully used as a public scapegoat for leaking information to the press

Plaintiff brings this suit as a 'Doe' because Brian Katz, Google's Director of Global Investigations, Intelligence & Protective Services, falsely informed approximately 65,000 Googlers that Plaintiff was terminated for 'leaking' certain information to the press. In fact, Plaintiff did not leak the identified information to the press and Katz knew he did not. Rather, Katz and Google used Plaintiff as a very public scapegoat to ensure that other Googlers continued to comply with Google's unlawful confidentiality policies.

Googlers can't disclose "confidential information" to an attorney or the government

Google does not include the required notices in its Confidentiality Agreement with employees. Instead, it informs Googlers that they cannot disclose 'confidential information' to anyone — even to an attorney or the government.

Google's unlawful confidentiality policies also prohibit disclosure of information to the government or a law enforcement agency of potential violations of the law.

Googlers go through a "You Said What?" training program to discourage whistleblowing

Indeed, a second training program entitled 'You Said What?' specifically states that Googlers must 'avoid communications that conclude, or appear to conclude, that Google or Googlers are acting 'illegally' or 'negligently,' have 'violated the law,' should or would be 'liable' for anything, or otherwise convey legal meaning.' It other words, Googlers are prohibited from communicating concerns about illegal conduct within Google.

Google has a "team of Stopleaks super-sleuths" to investigate any Googlers who might've leaked company information...

Under its 'Stopleaks' program, after a Googler submits a leak report to the Stopleaks site, Google's 'team of Stopleaks super sleuths investigate every leak. ... The Stopleaks team researches the project/product that was leaked and aims to determine the leak's origin. From here, [the Stopleaks team] often liaise with other cross-functional Google teams that may contribute additional context to the investigation.'

...and the Stopleaks program uses a Chrome extension

The Stopleaks program is managed through an internal website that includes a Chrome extension to facilitate the reporting of alleged 'leaks' on the internet. Employees are required under Google policies to report 'leaks' to Stopleaks. A violation of Google's policies can result in termination.

"Transparency is a huge part of our culture. Our employee confidentiality requirements are designed to protect proprietary business information, while not preventing employees from disclosing information about terms and conditions of employment, or workplace concerns."