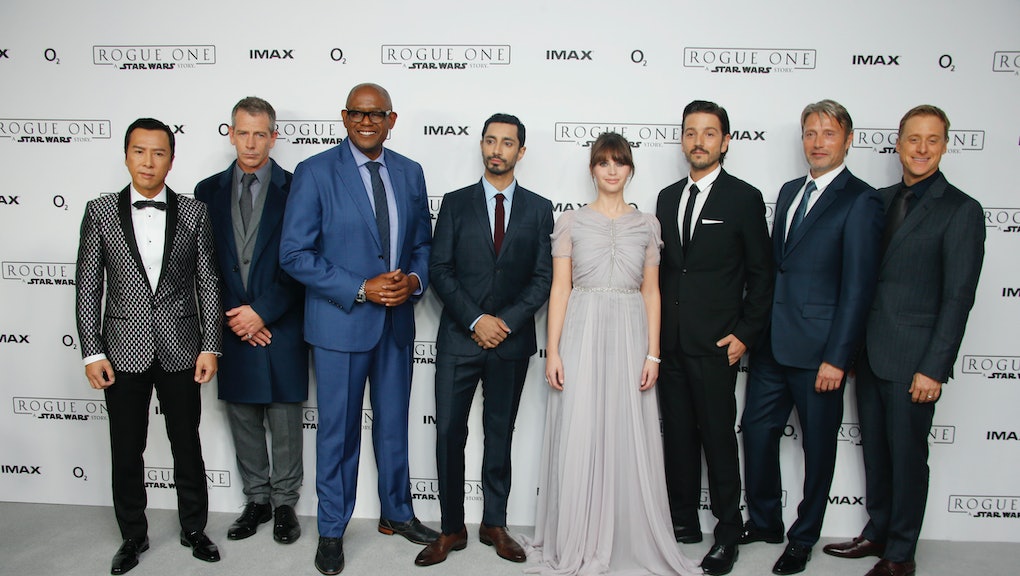 The story of 1977's Star Wars: A New Hope is so alive in the cultural milieu that, even if you have not seen it, its general structure and plot points have seeped into your brain. Three heroes — a princess, a pilot and Luke Skywalker — defend the galaxy from the evil Darth Vader.

But the story of Star Wars also contains a certain bias through which we read most of our stories: that a small group of people — two white men, one white princess — created change and toppled the Empire with courage, bravery and underdog charm. At the core of the film is the great American mythos: the white male savior who comes to save the day. The "white savior" film trope is just the cinematic expression of the "Great Man" theory, or the idea that history is moved by great (usually white) men.

Editor's note: Spoilers ahead for Rogue One: A Star Wars Story.

Rogue One challenges that narrative with a sly bit of historical and cinematic revisionism. The film resists the idea that a few good men were responsible for destroying the Death Star and instead offers a large, diverse cast that includes a woman (Felicity Jones), a Latino (Diego Luna), three Asian men (Riz Ahmed, Donnie Yen and Jiang Wen), one of whom lives with a disability (he's blind) a defector robot and war refugees in exile. There are even a few hints toward queerness — though they're far more subtle than we'd like. (Yet women of color were not present at all.) Instead of focusing on the actions of a brave few, Rogue One depicts what is at the heart of real activist movements: a diverse coalition of people, setting aside their differences to work toward a common goal.

"[The white male who saves the world] gives people the wrong idea about how social transformation takes place and that's very dangerous, because it renders the audience so misinformed that they may pursue the wrong path [to change]," Sarah Schulman, a professor of humanities at the College of Staten Island, said in a phone interview. "Every American myth is about the white male individual who saves the world. But repeating this flies in the face of all evidence."

Schulman is also the co-director of the ACT UP Oral History Project and a longtime member of the AIDS activist group. As evidenced by movements like ACT UP, change happens when a broad collection of people — women, homeless people, drug users, poor people, gay people and more — come together to force progress. But that's not how history is always remembered.

Rogue One stands as a model for how to make more diverse films and how to make more honest ones that show the real work that broad coalitions undergo to foster social change. In 2015, the film Stonewall depicted an alternate universe where the Stonewall Riots began with a white twink from Oklahoma lobbing the first brick against the police in resistance. In reality, it was transgender women of color, many of them also homeless, who fought back at the original 1969 Stonewall riots in New York, which are considered the genesis of the modern LGBTQ rights movement.

Even documentaries like How to Survive a Plague, while depicting the actual events of the 1980s response to the HIV/AIDS crisis, choose to reduce complex narratives about resistance during the AIDS epidemic to a more digestible story about five white men (and two women) who were able to get people the medicine they needed to live. In reality, ACT UP was a group of hundreds of people of diverse backgrounds whose work evades easy summary.

Rogue One stands out for its real-life portrayal of how movements work because there are still so many fictional tales that rely on the white male savior trope. It's easy for Hollywood, a white-male dominated industry, to rely on overused narratives because they're often box office successes. But audiences are also conditioned to see a certain type of person lead the cavalry. This emphasis on one heroic figure is also baked into American film lore via the cowboy.

Samhita Sunya, assistant professor of cinema at the University of Virginia, called the cowboy the "figurehead of American cinema" in a phone interview with Mic. The cowboy restores law and order, usually against an outside threat like Mexican bandits or Native Americans. A new crop of westerns has concurrently resurrected the cowboy. According to Sunya, films like Hell or High Water, The Magnificent Seven, The Hateful Eight and True Grit have renewed American interest in white man as hero.

While Rogue One shows where film should be headed, westerns are pure nostalgia for the past. Sunya said this cinematic dichotomy presents a great new opportunity for moviegoing Americans because they help us to examine "deep-seated biases" like the white savior narrative. The cultural tension between Rogue One's narrative and the western is very telling of the current tussle happening between Obama's America (a diverse coalition) and Trump's America, which looks back at when America was great.

"The rise of white nationalism that is interested and invested in homogeneity defining American culture is an interesting way to frame these two tendencies happening at the same time," Sunya said. "The reaction to multiculturalism has been a revival of this certain idea of traditional America as white."

But Rogue One slyly offers a way out of the white male forest. The film backs into one of the most famous stories ever told by offering a prequel in which women and people of color lay the foundation for the rest of the franchise. Perhaps the success of a film like Rogue One is a sign that audiences are ready to declare the Great American White Male trend passé.

"Because it's a Star Wars film, people will go and watch it and these depictions of a diverse coalition has clear resonances with people in our time," Sunya said. "Whether it's Black Lives Matter or the refugee crises, I think this is a very robust opportunity to engage a wide audience in questions about these issues."