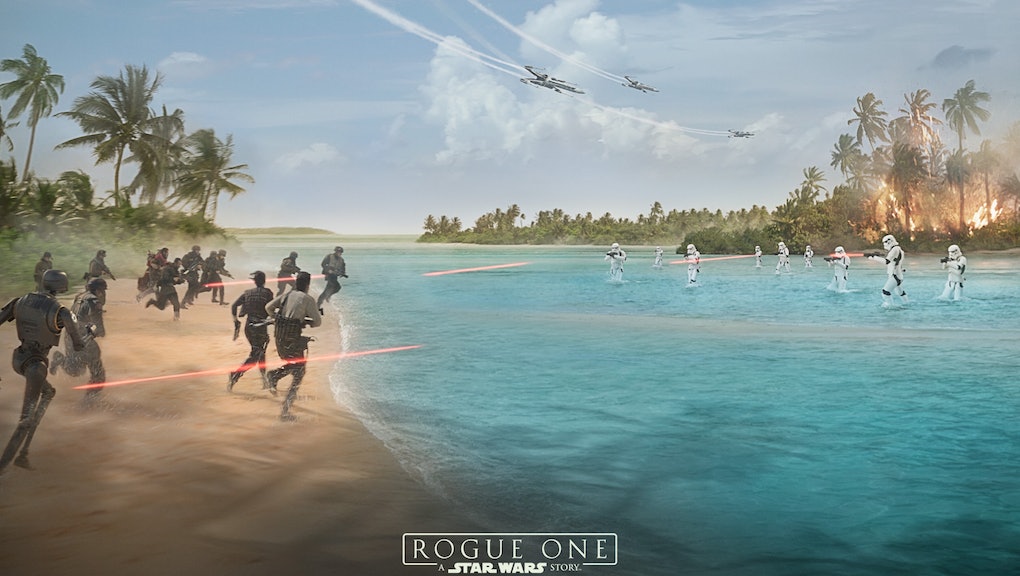 The number of people who have not seen the latest Star Wars film, Rogue One: A Star Wars Story, is dwindling by the day. Rogue One has not even been in theaters for a week, and the film has already crossed $200 million, the second fastest Star Wars film to do so in the month of December.

The film has been lauded nearly universally, and if fans have had any gripes — and there are not many — most deal with the departure from the series' norms, like the lack of an opening crawl or having a score composed by Michael Giacchino rather than John Williams.

Prior to Rogue One, all seven films in Star Wars' main saga had contained an opening crawl. Along with Williams' score, it is a trademark of the series. The decision to not include the text is one of a few controversial decisions, like bringing the late Peter Cushing back to life as Grand Moff Tarkin through CGI.

While fans may have been disappointed to hear that Rogue One would not have an opening crawl, most of them likely got over it pretty quickly, as the film has been earning mostly positive reactions.

Still, that is not to say that some do not feel the film needed an opening crawl. In fact, one such fan decided to go as far as to create one himself. According to The Hollywood Reporter, Andrew Shackley, a Los Angeles based reporter, decided to make a custom crawl. The reported stated:

"If any film in the new Star Wars canon needed a crawl just to let people know where we are in time in this universe, it was Rogue One. At the very least, I feel these words give added weight to the opening prologue of the film."

The text of Shackley's Rogue One crawl reads as follows (you can watch the video on THR):

"The Jedi are all but extinct, the Republic has fallen and in their wake, the Galactic Empire has engulfed the far reaches of the galaxy in fear. Persecuted members of the Old Republic have been thrust into hiding. Only members of the REBEL ALLIANCE dare take a stand against the ruthless Imperial forces. Deep in the Outer Rim territories, the dastardly Director Krennic has discovered the location of a long lost friend; one capable of completing the Empire's most powerful weapon yet..."

Does Rogue One need an opening crawl?

While an opening crawl is undoubtedly a trademark of Star Wars films, the absence of such text in Rogue One did not take much, if anything, away from the viewing experience. Rogue One has been positioned as a standalone film, outside of the main trilogies, and as such, Lucasfilm made some slight departures from the norm.

As it turns out, the lack of an opening crawl and Giacchino's score helped set the film apart from the main saga. As the first of the Star Wars anthology films, Rogue One proved that you do not need a Skywalker to tell a successful Star Wars story. Would a Rogue One opening crawl have been nice? Sure. Was it necessary? Not at all.

Rogue One is currently in theaters. You can read our review for the film here.