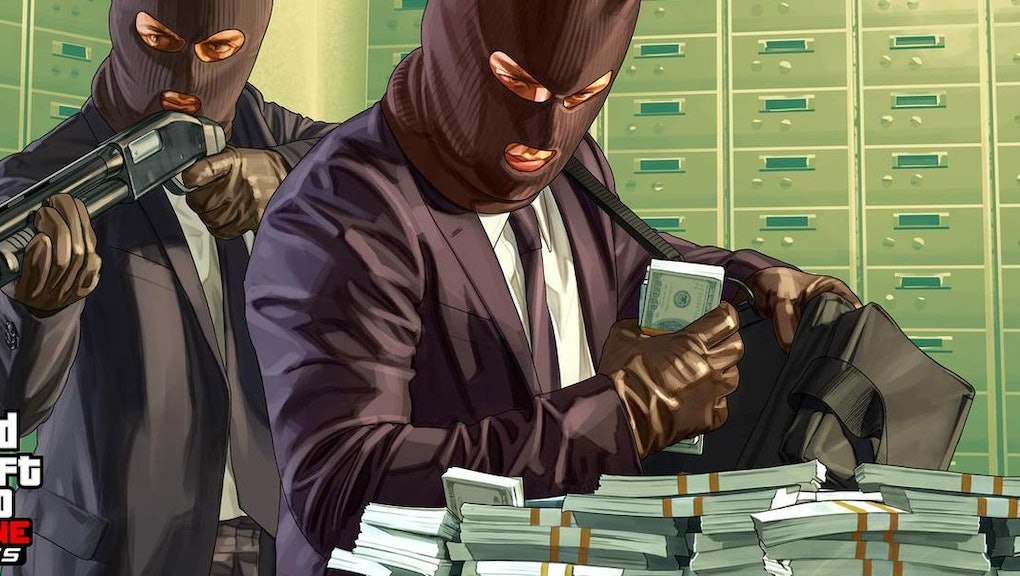 'GTA 5 Online' Cheats, Hacks, Glitches and Exploits: How to make money fast and other tips

Although it's been more than three years since Rockstar Games released Grand Theft Auto 5, the latest entry in the studio's open-world, car-based larceny game, still has a lot of life left in it. This is because Rockstar, in spite of being hard at work on a new Red Dead Redemption game — and possibly GTA 6 — has churned out new content for GTA 5 Online at an incredible pace

The most recent expansion, "Import/Export," was released back in December. But longtime players of the game might still be wondering, "What more is there for me to do? I'm already a CEO, I've got the cool TRON Lightcycle-looking Pegassi FCR 1000, my GTA 5 Online character is now endlessly strong and I've even played around with the single-player cheat codes. Seems like I've done everything!"

Perhaps, but what about glitches? Although Rockstar's pretty good at patching them out, GTA 5 Online is a huge game, so there are lots of opportunities for game-breaking, advantage-making and plain old tomfoolery with each new patch. This list won't be comprehensive, but Mic's compiled some of our favorite glitches below. Try some out if you're curious, but just remember: Rockstar's not shy about banning cheaters — so be careful.

According to redditor eRa_Tension, you can bypass the 15-minute cooldown for exporting a car relatively easily on the PS4 version of GTA 5 Online by simply suspending your game and opening up an outside application (like Netflix or YouTube). When you get back into GTA 5 Online, your cooldown for exporting should be cleared, regardless of whether or not 15 minutes have actually elapsed. It'll require a little more work to replicate on the PC, but it's doable.

If you don't mind playing a lot of musical chairs with cars, you can also use the new version of a duping glitch to get multiple Elegy Retro cars, which can be sold for a huge profit. A video tutorial for this glitch from French YouTuber TutoFacileFrance is embedded below:

For those of us that don't speak French, however, there's an English translation walkthrough of the glitch on the Se7enSins gaming forum. Essentially, what you're going to want to do is swap your cars around in a very specific order in your garage. Then hop in the car you want to dupe and hit the accelerator while trying to open the car mod menu. If you manage to buy a mod, the car will disappear — when you return to your garage, you should have the regular car and a dupe in there.

If you're playing on the PC and not interested in hot-swapping cars in your garage to dupe them, redditor SuperSlimek found an easy way to get more money during Car Sale missions. Essentially, if you have three associates, have them drop off additional cars for delivery after you make your initial delivery and you can make an extra $300,000 in the game. Some redditors have also confirmed being able to do this solo, so it's an easy glitch you can pull off that doesn't require nearly as much coordination as the previous dupe glitch.

GTA 5 Online Cheats, Hacks, Glitches and Exploits: Use your car as a human rocket launcher

Although it's more "consequence of physics" than an actual coding glitch, YouTuber Chaotic found that you can use the Rocket Voltic (a car featured as part of the Import/Export update) to launch your character high into the atmosphere. To do so, you just need a friend to park the Voltic on a slanted surface — then just walk up to the car's rocket engine and have your friend ignite the booster on the back. It'll send you sailing into the sky, but you probably won't stick the landing.

Another weird glitch you can use to impress your friends and bamboozle your enemies is to sit backwards in a tractor. All you'll have to do to achieve this astounding feat of game-breaking derring-do is find a tractor and get inside it. Then press and hold the buttons to lean forward and honk the horn simultaneously. Your character will face backwards in the tractor, to the horror and delight of anyone else around.

If those aren't enough for you, you can also wriggle your way into a lot of spaces you're not supposed to be able to reach with enough effort and know-how. Before patch 1.37, you were still able to glitch yourself inside the lefthand side of the strip club by parking a car in a very specific spot outside the building and climbing up it. This glitch has sadly been patched out, but it's still a good example of the sort of antics you can get up to with a little bit of gumption.

Of course, players are always finding new and unusual places to glitch themselves inside of, so if exploration is your game, you'll find no shortage of fun to have in GTA 5 Online.

Somewhat inexplicably, a lot of glitches on the GTA Glitches subreddit are devoted to weird things you can do with clothing, the most recent obsession being a glitch that makes you able to wear hats with a new glowing bodysuit that was introduced in the latest update.

According to redditor LilNinja94, all you have to do to perform this glitch is enable "auto show bike helmet" under the interaction menu's "style" tab. Once that's done, get on a motorcycle and allow the game's animation of you putting on your helmet to play. Then get off the motorcycle and quickly switch to the desired outfit with the bodysuit. If you've done it correctly, getting on and off your motorcycle again should be enough to make your hat appear on your bodysuit. Don't forget to save the outfit afterward! It doesn't work with every hat, though, so try some combinations to see what works.

If you need more accessorizing options, there's also a way to get the heist duffle bag to appear on most outfits. You'll need an outfit that already has the duffle bag on it, an outfit you want to put the duffle bag on, a helicopter and a parachute to make this glitch work.

Once you've accumulated everything you need to pull off the glitch, simply put on the outfit that has the duffle bag on it, fly up into the air in your helicopter and jump out, activating your parachute as soon as you're able. While in the air, go into your "style" tab in the interaction menu and hover over the outfit you'd like the duffle bag to be on, but don't change into it until you land and your character is taking off the first strap of the parachute. If you've done it right, the duffle bag will appear on the outfit that didn't previously have it on, so you can always look like you're really about to make good on your New Year's resolution to hit the gym more often.

There are also a lot of glitches to make your limbs disappear, if you're just dying to play as Phantom Limb from The Venture Bros. in GTA 5 Online. One way to give yourself invisible arms is shown in the video embedded below, around the 1:15 mark.

To indulge in this ghastly glitch, you'll have to go to your yacht while wearing a bodysuit and register as the CEO of Securoserv, then put on the Founder's outfit in your menu before going into the Jacuzzi, which will change you into your swimsuit. While in the Jacuzzi, place a sticky bomb on the side of the Jacuzzi, step down as CEO, get out of the Jacuzzi (making sure you're standing on the sticky bomb) and reactivate your CEO status (it's very involved, we know). As soon as you re-register as a CEO, however, you'll want to detonate the sticky bomb, killing yourself. If you spawn in wearing the swimsuit, you're in luck! If not, just try again.

Assuming you've managed to succeed up to this point, the rest of the glitch is pretty easy. Go into your yacht and access your wardrobe. From there, you'll just have to put on a bodysuit and then exit out of your wardrobe. After doing that, you'll have to open up the interactive menu, select accessories, equip a pair of gloves and then scroll up to the top of the menu to equip a pair of earrings. You should see your character's arms beginning to glitch out once you equip the gloves. Once you've equipped the earrings, scroll back down to gloves, un-equip them and voila! Your arms should disappear.

You can also use a different glitch to get your feet to disappear if being armless just isn't enough for you.

Of course, cataloging all the glitches in GTA 5 Online would take forever — or just be outright impossible. It's a huge game! But if these offerings have whetted your appetite to try some glitches for yourself, there are resources out there to help you do all sorts of goofy stuff in GTA 5 Online.

Specifically, the GTA Glitches board on Reddit and the Se7enSins Grand Theft Auto 5 Glitches forum provide walkthroughs and independent confirmation for glitches, as well as facilitate partnering for people trying to do the same glitches.

We'll leave you with one final warning: Some of the exploits are pretty innocuous, but you'll want to use your best judgment on others. As antithetical as it seems to crack down on cheaters in a game based on bank heists, murdering people and stealing cars, Rockstar is still doing its best to ban cheaters and exploiters from using GTA 5 Online. Don't say we didn't warn you!

Stay up-to-date on everything Rockstar games-related

Already bored of glitches or just not so inclined? No problem. Mic's got you covered with rumors about Red Dead Redemption 2's release date, how to play the original Red Dead Redemption on your PS4, some insight into the "Vineweed prank" players were reporting in GTA 5 Online, rumors about GTA 6's release date, as well as a glut of tips and tricks for GTA 5, including how to increase your strength, become a CEO, what Vehicle Vendetta mode is all about, and the new Import/Export update.