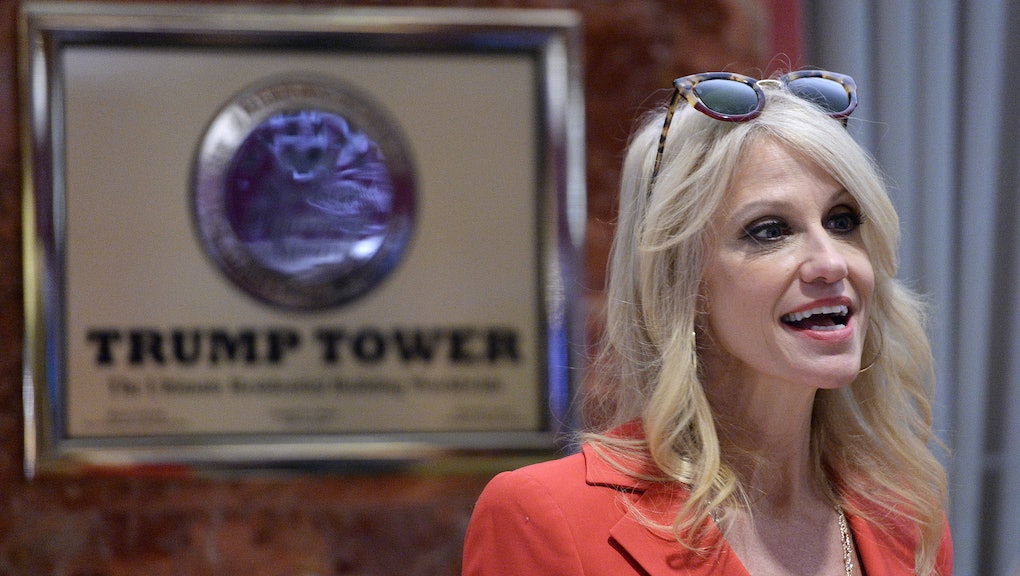 Now she's going to the White House with Donald Trump.

Conway, a mother of four who came aboard the listing Trump ship last summer, initially said she preferred to remain an outside consultant to the incoming administration.

But the bottom line is Trump needs her around.

Harlan Hill, a consultant and self-proclaimed "millennial for Trump," told Mic Conway is "a supremely positive influence" on the president-elect, keeping him "grounded in data, not just instinct."

Hill lauded Conway as "without question one of the greatest political strategists of the century," crediting her for helping identify and activate "an under-polled bloc of the electorate."

She did so, he said, with less money than Trump's Democratic rival Hillary Clinton and amid "very vocal opposition from the media."

After that upset victory, Conway could have easily chosen to "cash in to the tune of millions in the private sector, particularly helping corporate clients understand, target and reach the Trump voter," Hill said. "Instead, she is putting country first."

As Dana Perino, host of Fox News Channel's "The Five" and former White House press secretary to President George W. Bush puts it, part of Conway's job is to be a "Trump-splainer," spinning and smoothing his fiery, off-the-cuff comments into palatable sound bites.

With someone who pops off as easily as Trump, Conway has arguably had better luck explaining some of his remarks than others have, whether slash-and-burn, or bait-and-switch.

Conway's certainly got her detractors. And she wasn't even originally a Trump fan: With arguably a more conservative track record than her current boss, Conway initially supported Texas Sen. Ted Cruz for the GOP nomination.

An early December piece in Mother Jones noted she's worked for groups including the Federation for American Immigration Reform, which has been designated a hate organization by the Southern Poverty Law Center.

Long before the Trump campaign, Conway also worked for former Sen. Todd Akin (R-MO), the U.S. Senate hopeful who notoriously argued that pregnancy rarely results from "legitimate rape." (Conway quit the Akin campaign after that, but she also once said rape wouldn't exist if women were as physically strong as men.)

These days, as before, she's not afraid to talk in the tough tones of her boss. For example, there was the time she derided anti-Trump demonstrators and millennials as whiny "snowflakes" who needed to suck it up and deal with the mogul's election.

Conway takes as much or more heat as she dishes out on social media and television hits.

Still, unabashed fans of Conway, who earned her B.A. in political science from Trinity College and her J.D. from George Washington University Law Center, say if a democratic woman had engineered such a come-from-behind victory on the grand stage of U.S. politics, she'd be lauded as a national heroine instead of excoriated on Twitter.

E. O'Brien Murray, a New York-based strategist who estimates he's known Conway for a decade, said it makes sense that Trump would want to keep close ties with the woman who made her name as head of the polling company/WomanTrend.

"I think she has been able to figure out the secret sauce that keeps the president-elect on the right [track] to execute what's got to be done," Murray said in an interview.

"Since she's been there, it's been a very effective campaign and she's done a magnificent job at keeping the candidate — now the president-elect — on message."

Murray also noted that Conway, whose four kids are all under 13, has managed to balance motherhood while captaining one of the roughest political battles in modern U.S. history.

Conway herself, in an appearance on MSNBC, reiterated that her main concern about taking a White House role was making time for her children.

"This is a woman I've been on T.V. with and she's brought her children to the studio," Murray recalled. "She [is] terrific at balancing work and family. When I've worked with her, she's always been reachable. She's always on point."

And, Murray added, Trump's transition from real estate and reality show mogul to commander in chief could well be eased by bringing an intact, trusted inner circle with him to the Oval Office.

"[What's] important for a president, a newly elected official that doesn't come in with a staff that's worked with him for years — that would be a senator or governor —  is to respect and be comfortable with the men and women around him," he said.

"It's a testament to Kellyanne, to the victory that she pulled off as captain of the ship."