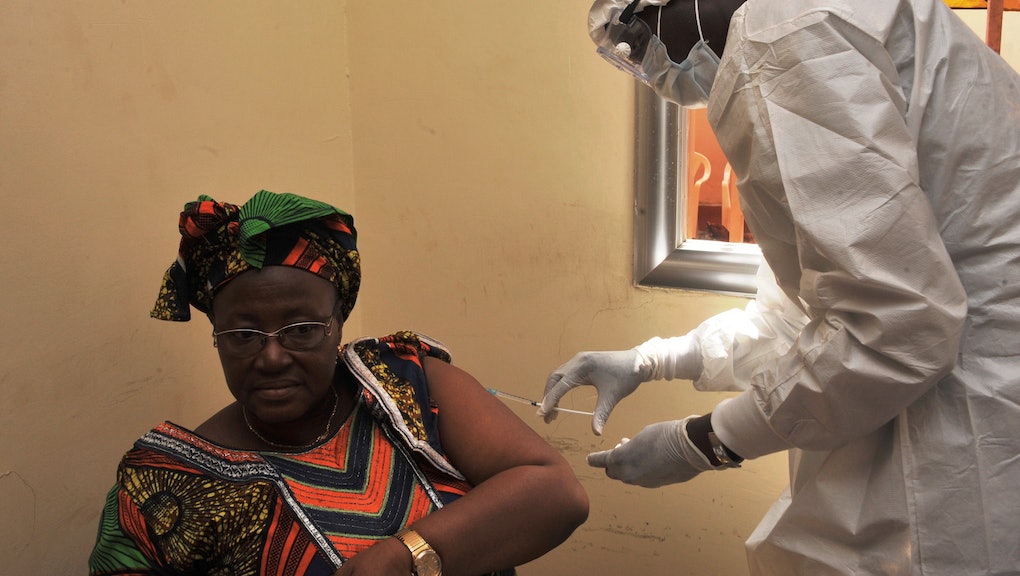 An experimental Ebola vaccine was shown to provide 100% protection against the deadly disease, according to a new study in the Lancet.

The vaccine, manufactured by Merck and tested in a large trial study in Guinea, appears to be a major breakthrough in preventing the virus that left more than 11,000 people in West Africa and a handful of other countries dead during an outbreak that began in 2014.

That outbreak, unlike others since the disease was discovered in 1976, created a sustained urgency to find a vaccine, according to the New York Times.

"While these compelling results come too late for those who lost their lives during West Africa's Ebola epidemic, they show that when the next outbreak hits, we will not be defenseless," the World Health Organization's Marie-Paule Kieny, the lead author on the study, told the Times.

Ebola, believed to originate in fruit bats, is an often-fatal disease transmitted through contact with infected animals or with bodily fluids of infected people.

The effects of the disease are horrific, with severe hemorrhaging occurring in many instances.

According to the Times, about 1,600 people died in smaller outbreaks of the disease between 1976 and 2014. In those cases, healthcare teams isolated those infected and were able to keep the virus contained in smaller villages.

But in 2014, the New York Times reported, the virus spread to larger cities, resulting in a far larger death toll and an international crisis.

It was the largest Ebola outbreak ever, according to the Centers for Disease Control and Prevention, and 40% of patients who got Ebola during the outbreak died. Guinea, Sierra Leone and Liberia accounted for most of the deaths. A handful of cases were also found in Europe and the United States.

Researchers administered the vaccine to more than 5,800 people in Guinea and Sierra Leone last year. None came down with Ebola within 10 days or longer. Among those in the 12,000-person study who did not receive the vaccine, 23 cases of Ebola developed.

The "remarkable" vaccine is being fast-tracked for regulatory approval, according to the BBC, and could be available by 2018.

An emergency 300,000 doses of the vaccine are at the ready should another outbreak strike before then, the Times reported.

However, the vaccine only seems to prevent the two most common strains of Ebola — which has five known strains — and may only be temporary, according to the Times. The vaccine is "a step in the right direction but not the ultimate solution," Dr. Gary J. Nabel, a chief scientific officer at the Sanofi pharmaceutical company, told the paper.