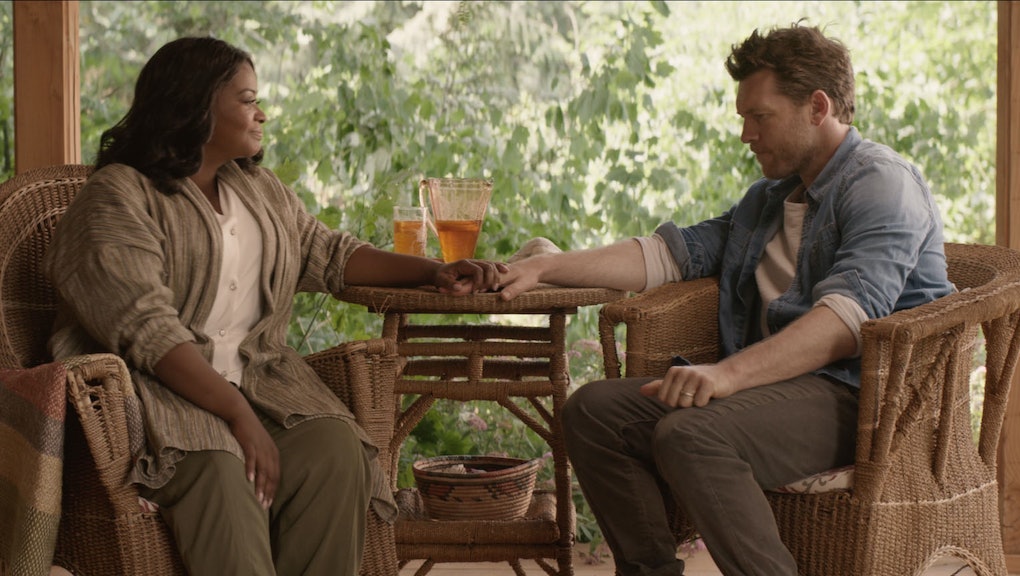 Octavia Spencer stars as God in The Shack, the film adaptation of the popular novel by the same name. Due out this spring, The Shack has drawn criticism from some conservative Christian leaders who think it's blasphemous to have a black woman portray the Almighty. Never mind that the New York Times bestseller was branded a Christian book when it came out nearly a decade ago. But as the Washington Post points out, William P. Young's book earned criticism then and the similar backlash toward the movie is appearing now.

In The Shack, Octavia Spencer of The Help plays God, but goes by "Papa." In this tale, she helps Mack Phillips, played by Sam Worthington, overcome his depression and faith crisis as a deeply conflicted man.

"Young's pretentious caricature of God as a heavy set, cushy, nonjudgmental, African American woman called "Papa" (who resembles the New Agey Oprah Winfrey far more than the one true God revealed through the Lord Jesus Christ — Hebrews 1:1-3), and his depiction of the Holy Spirit as a frail Asian woman with the Hindu name, Sarayu, lends itself to a dangerous and false image of God and idolatry."

Meanwhile, James B. DeYoung, who wrote Burning Down the Shack: How the 'Christian' Bestseller is Deceiving Millions, told the network:

"If the film is a faithful portrayal of the events and the theology of the book, then every Christian should be gravely alarmed at the further advance of beliefs that smear the evangelical understanding of the truth of the Bible."

The issue of universalism

DeYoung also told the Christian News Network since he knew Young before the book was published, he was aware of the author's personal "slide into universalism." And, no, he doesn't consider that a good thing.

According to the Evangelical Christian online encyclopedia Theopedia, universalism is the idea that all people will eventually be "saved" and go to Heaven.

DeYoung told the network he recalled the author presenting a 100-plus page document for an Evangelical conference which denounced Evangelical teachings. He added that Young "has never renounced the particulars of universal reconciliation, [and] he refuses to say that other world religions are in error in their assessment of Jesus as the unique son of God."

According to Schimmel, Young has made public statements disagreeing with the idea that God will punish sinners who do not atone for their sins.

"Tragically, these heresies are reflected in the aberrant fictional theology presented in The Shack," he said. "These are not mere trivial matters but strike at the very heart of God's character and the gospel that saves our eternal souls."

Christian doctrine asserts that you must repent for your sins and accept Jesus Christ as your savior in order to be saved and to go to Heaven.

Not reviled by all Christian leaders

Still, Young has his Christian fans. Take Bishop Dale C. Bronner, for instance, who recently posed with the author for a photo and tweeted it on Dec. 12. Bronner is the founder and senior pastor of the Word of Faith Family Worship Cathedral.

Or Bill Ritchie, senior pastor of a large denominational church in Vancouver, Washington. In 2008, he told the New York Times he had to put the book down when he first read that God was a black woman.

"I was so stunned by the presentation of Papa that I couldn't deal with it," said Ritchie.

Once he finished the book, he recommended it to his congregation, calling it "one of the most remarkable books I've read in years."

The New York Times reported that Ritchie's church even bought cases of the books to sell to congregation members.

The Shack will be in theaters March 3.