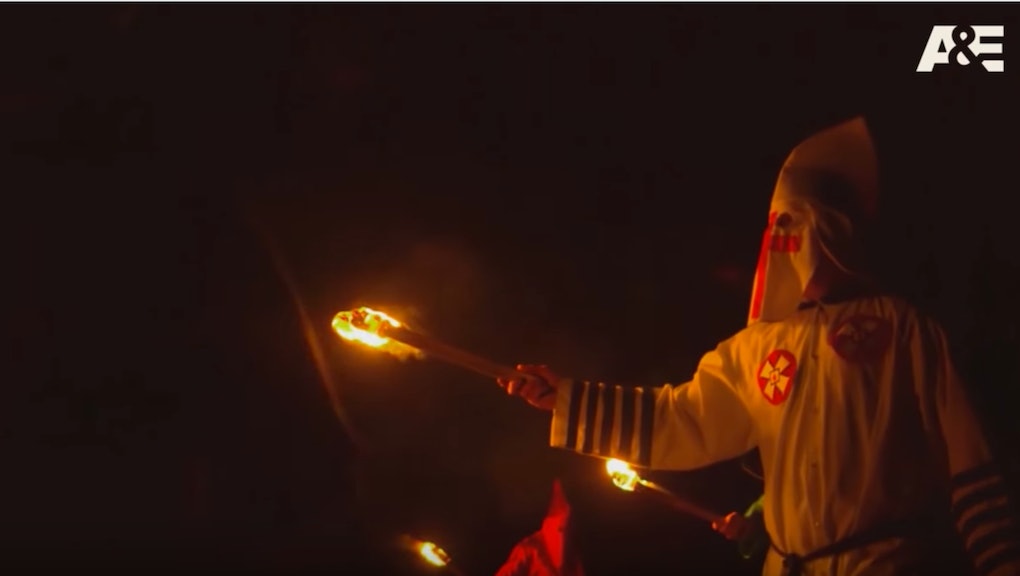 Amid the intense backlash from the promotion of the show, A&E is changing the name of its Generation KKK series, which is intended to explore the resurgence of the Ku Klux Klan in the United States. After critics accused the upcoming show of normalizing racism and white supremacy, the network is renaming the series Escaping the KKK: A Documentary Series Exposing Hate in America.

"This is not a reality show starring the KKK," Rob Sharenow, A&E's executive vice president and general manager, said to Variety. "This is a documentary series and that's been the approach from the beginning. I think there's been a horrible misperception about what it is and what we set out to do. This is a pure documentary that looks at a previously hidden part of the world."

In addition to the new name, A&E has a new partnership with civil rights group Color of Change. According to Variety, the series will now include "segments featuring civil rights leaders to help provide context to the documentary." In addition, A&E will produce a post-show, town-hall style special on ending hate in the United States.

This falls in line with the network's responses to critics of the series on social media, including Grey's Anatomy star Jesse Williams, who accused A&E of making hate "normal again."

"Black communities know all too well how perpetuating stereotypes and hateful rhetoric can empower a racist and violent agenda," Color of Change executive director Rashad Robinson said, according to the Hollywood Reporter, regarding A&E's announcement. "At Color Of Change we recognize the power of TV and media images and our work is rooted in creating a less harmful and hostile world for black people and all people.

"We look forward to seeing updated content that adds further context to the episodes, and working closely with A&E on programming that articulates the network's intention of reversing racial hatred and violence, as well as finding ways to work with A&E and anyone else to end the rise of white supremacy and the hateful and violent tactics of the organizations that advance this ideology."

The issue for some detractors of the show, however, is the network putting the spotlight on the KKK in the first place. In a review of the show from the Daily Beast's Nick Schager — in which the author noted that he viewed four episodes of the eight-part series — he criticized it for being framed similarly to the A&E's other reality series.

"A&E's newest series does something worse than just provide a platform for the KKK: It employs the formal format and devices of the channel's other hits (Hoarders, Intervention) to transform its bigots into colorful characters, thereby placing them on the same plane as the rest of cable TV's freaky reality stars," Schager wrote. "By situating them in a familiar faux-verité package, Generation KKK makes clear that these rancid people are just as suitable subjects for our entertainment as anyone else. In short: It legitimizes them."

Similar responses were met for the show on Twitter.

The Ku Klux Klan was formed in 1865 after the abolishment of slavery, with the group initially targeting Southern African-Americans. After having as many as 4 million members in the 1920s, the Southern Poverty Law Center estimates that there's anywhere from 5,000 to 8,000 members of the Klan today.