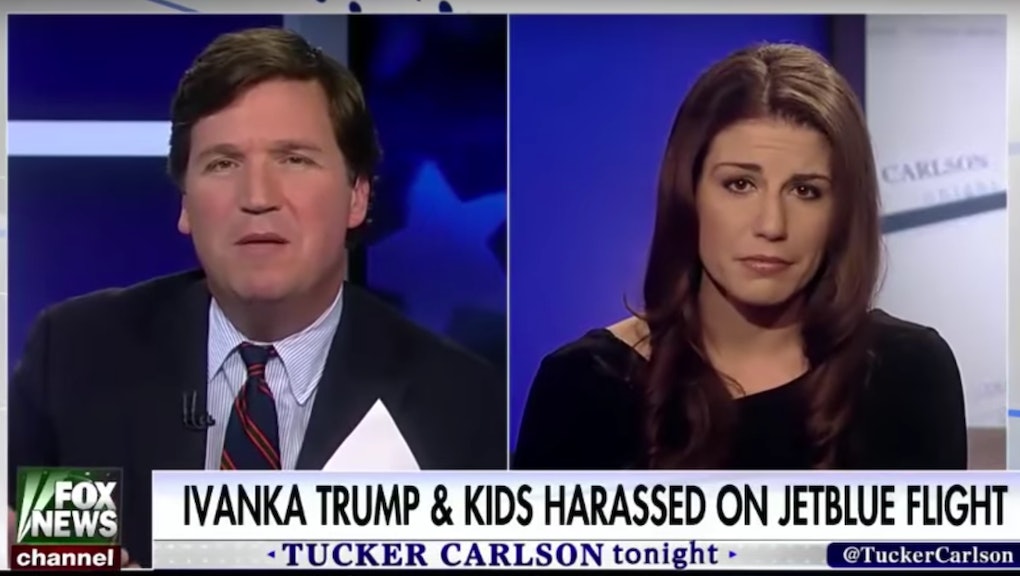 In the segment, Carlson frames the conversation as if he and Duca would be sparring against each other, though Duca tries to highlight several times that she feels no one should be harassed on an airplane. She does point out, however, that Trump isn't just anybody. Trump has access to immense power: her father, President-elect Donald Trump.

Carlson then says that Duca's tweets — one from Friday and one from Sunday— didn't suggest she thinks Ivanka Trump should have been left alone.

Carlson tries to unpack Duca's use of the term "sinister complicity." Carlson argues that she is his daughter and shouldn't be called complicit. Duca says that Ivanka Trump's reported role as first lady and as a surrogate for women's issues deserves a closer look.

"I think she's an incredibly successful, brilliant woman," Duca says. "The fact that she was able to balance [her father] out on these issues where he has talked about defunding Planned Parenthood and being against abortion ... I think we need to investigate those things a little more critically, a little bit more rigorously and not be blinded by the fact that she looks like she smells like vanilla."

Carlson takes offense to Duca's characterization. "She looks like she smells like vanilla, who's objectifying women here?" he shoots back. Carlson goes back to the word "sinister" and asks if it's sinister for a daughter to support her father.

"It's sinister for a daughter to capitalize on the power of feminism and united women and empowering women while supporting a candidate that is the most antiwoman candidate this country has seen in decades," Duca says.

"What does that even mean?" Carlson asks.

As the two continue to go back and forth, Duca pushes back on Carlson, who she says isn't trying to understand her point, but is trying to challenge her.

"You're shouting over me every time I speak, it's incredibly unprofessional." Duca says. "You're actually being a partisan hack who is attacking me and not even allowing me to speak."

Later in the interview, Carlson asks Duca about her viral Teen Vogue piece, in which she argues that Trump is gaslighting America. He calls her "moronic" for writing that Trump threatens the safety and sovereignty of Islamic Americans.

Though the headline of the story argues that Trump is psychologically abusing the American people, Carlson interprets the story as Duca believing Trump is abusing her.

"Does Trump make you feel like you're crazy? That's the impression that I'm getting," Carlson says.

"Are you calling me crazy? That's adorable," she says. "What I mean by that is that he frequently contradicts objective evidence, not that he is abusing me personally. And I think that you're smart enough to know that, aren't you, Tucker?"

Duca asks Carlson if he's read the entire article, to which he replies that he's also read some of her other Teen Vogue articles about One Direction and Ariana Grande's thigh-high boots.

"A woman can love Ariana Grande and her thigh-high boots and still discuss politics," Duca says to Carlson, who is laughing. "Those things are not mutually exclusive."

She continues, "We treat young women like they don't have a right to a political conversation, like you can't enjoy Kylie Jenner's Instagram and worry about the future of this country."

Carlson ends the conversation by telling Duca, "Stick to the thigh-high boots. You're better at that."

After the encounter, Duca called Carlson an "enemy of rational discourse" on Twitter.

You can watch the entire exchange on Mediaite.