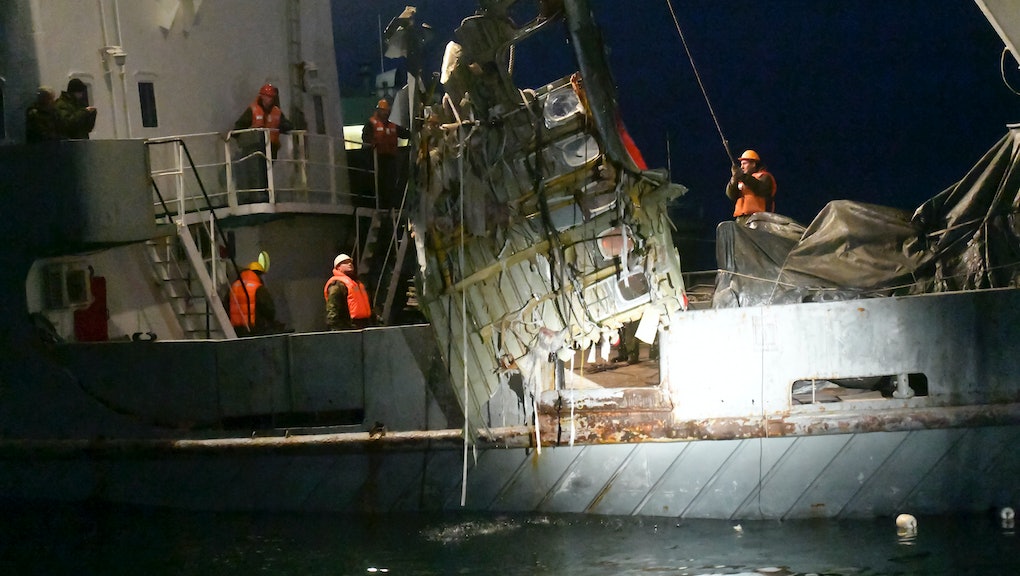 The first of two black boxes from the Tupolev-154, a Russian military plane that crashed into the ocean Sunday morning, has been recovered, CNN reports. The cause of the crash remains unknown, but officials are hopeful that the flight data will offer clues as to what caused the plane to crash. The second black box, a cockpit voice recorder, has not been recovered.

According to Sputnik, a Russian state-news agency, the Russian Ministry of Defense stated that the flight data recorder was delivered to the Southeast Moscow Research Center in "fair condition" and that "its decryption will begin after technical cleaning in distilled water."

Maxim Sokolov, Russia's transportation minister, stated that investigators weren't ruling out terrorism, but that they plan to "base our work on the premise that technical malfunction or pilot's error caused the catastrophe," the New York Times reports.

Russian president Vladimir Putin declared Monday a day of mourning for the victims of the Tupelov-154 crash. The Russian Ministry of Defense said there were no survivors and that so far, "12 bodies and 156 bodily remains" have been recovered, with one body identified by relatives. An unnamed source reportedly told Russian news agency Tass that 13 bodies have been recovered and there has so far been no evidence of an explosion or fire onboard the plane.

The Tupelov-154 was carrying 92 people, consisting of 84 passengers and 8 crew members, and crashed shortly after refueling in Sochi. Sixty-four of the passengers were part of the Alexandrov Ensemble, the Russian army's official choir, and were en route to Syria to perform for Russian troops. Elizaveta Glinka, known as Dr. Liza, was confirmed among the passengers. Glinka, a humanitarian and head of the fair aid charity Spravedlivaya Pomoshch, was onboard to deliver medicine and supplies to a hospital in Syria.