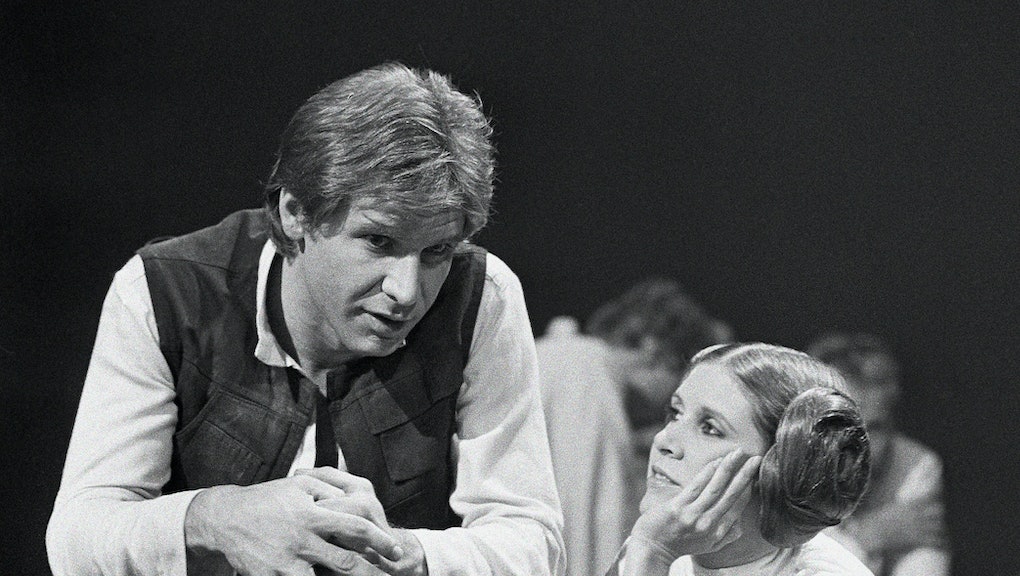 Carrie Fisher, actress and author, died Tuesday after having a heart attack while on a plane from London to Los Angeles Friday. She was 60. Following news of her death, former co-star and onetime love interest Harrison Ford released a statement succinctly capturing the legendary life of Carrie Fisher:

Carrie was one-of-a-kind ... brilliant, original. Funny and emotionally fearless. She lived her life, bravely... My thoughts are with her daughter Billie, her mother Debbie, her brother Todd, and her many friends. We will all miss her.

Fisher, who exploded into fame for her performance as Princess-turned-General Leia Organa in the Star Wars series, was the daughter of actress Debbie Reynolds, who starred in Singin' In The Rain (millennials might recognize her as Aggie Cromwell in Disney's Halloweentown) and singer Eddie Fisher, whose scandalous affair with Elizabeth Taylor resulted in the end of their marriage.

Following her burst into stardom, Fisher became notorious for partying hard. She was open about her stints in rehab and struggle with drug addiction, telling reporters she did cocaine on the set of The Empire Strikes Back: "I didn't even like coke that much. It was just a case of getting on whatever train I needed to take to get high."

In a 2000 interview with Diane Sawyer, Fisher disclosed her longtime battle with manic depression and bipolar disorder, telling Sawyer "I have a chemical imbalance that, in its most extreme state, will lead me to a mental hospital." In the interview, Fisher addressed the convergence of her addiction with her mental health:

I used to think I was a drug addict, pure and simple — just someone who could not stop taking drugs willfully. And I was that. But it turns out that I am severely manic depressive.

Fisher embraced her mental health and addiction struggles, detailing the rollercoasters of her life in her one-woman-show-turned-book Wishful Drinking.

Throughout her 40-year career that spanned from acting to script doctoring to authoring, Fisher became a sort of quirky shoulder to lean on. She held hilarious interviews with her dog Gary, laughed off critics for their surprise that people age, gave loving, warm life advice and tenacious clapbacks and worked tirelessly to destigmatize mental illness. In Wishful Drinking, Fisher stated that for her obituary, "I want it reported that I drowned in moonlight, strangled by my own bra." She really was a one-of-a-kind.