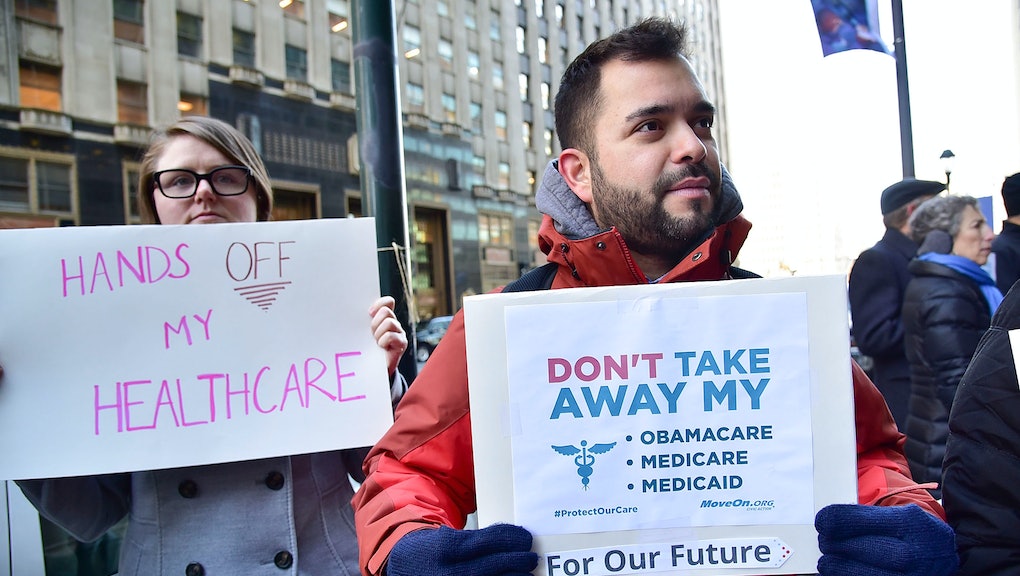 If you think Obamacare will survive a Trump administration intact, you haven't been paying attention. President-elect Donald Trump and the Republican-controlled Senate have the power to repeal Barack Obama's signature health care program, the Affordable Care Act.

Republicans, who now have the power to repeal the law, chafe at some of its main provisions, like the individual mandate (which requires people, especially healthy people, to buy insurance) and the high premiums. They believe that the ACA has made health care measurably worse.

The GOP's previous — and repeated — efforts at repealing the legislation drew Obama's veto. That dynamic has obviously changed.

Americans have been deeply divided about the health care program since its inception, according to the Kaiser Family Foundation, which hasn't registered more than 50% favorability for the law over the past two years.

However, young people have approved of the ACA at much higher rates, peaking at 58% in October, just before the presidential election. (In November, more young people between 18 and 29 still favored the ACA rather than opposed it, but the percentage supporting it had slipped to 46%.)

What will replace Obamacare?

The looming question for the Trump administration is: What will replace Obamacare?

The Urban Institute released a study showing that if parts of the ACA are pulled apart — as was proposed in the vetoed January 2016 bill — without a replacement, nearly 30 million Americans will become uninsured, including 4.4 million children.

Price's approach is to replace insurance exchanges and individual mandates with tax credits based on age to help people buy insurance themselves. The government could give grants to states to establish pools for those with high health care costs who cannot find insurance on their own.

During the campaign, repealing the ACA was a main plank of Trump's platform — he even vowed to hold a "special session" to repeal it once president.

But the president-elect backtracked a bit once he visited with Obama after the election, admitting that he might keep parts of the law on the books. For instance, Trump is poised to hang on to provisions that allow young adults to stay on their parents' plans until the age of 26 and bar insurers from charging more or denying coverage to people with pre-existing conditions.

Still, one of the highest hurdles the Trump administration will need to clear is how to address continued coverage for the 20 million people, per the Department of Health and Human Services, who now have health insurance through the ACA. Will a new plan be able to maintain the current rate of uninsured people, which reached an all-time low of 8.9% this year, according to the Centers for Disease Control?

There are benefits that the ACA brought people — particularly millennial women — that may be left on the cutting room floor. Here are the top three things that may not survive.

Women's birth control may no longer be covered.

Mandating that insurance companies pay for female contraceptives was a hornets' nest of contention during the design of the ACA. The issue brought the eventual law before the Supreme Court, which, hampered by a vacant seat, sent the case back to a lower court.

Under the ACA, 18 types of federally approved birth control must be covered by health insurance plans offered in the exchange — with no copay and no out-of-pocket expenses.

While insurers, under the ACA, are required to cover a type of each of the 18 kinds of contraception for free, they are still allowed to charge women for name brand or more expensive versions.

Removing the provision could result in a shift back to private providers for contraceptive care.

The ACA has been a boon to birth control. The number of women who paid out of pocket for birth control in 2012 was 22%. That dropped to less than 4% by 2014, according to the Kaiser Family Foundation.

Health policy experts are concerned about the reliance on private providers or publicly funded sites to provide birth control, particularly to low-income women.

Mapping sites where women have "reasonable access" to contraceptives shows that only half of U.S. counties meet the criteria. Then there are the "contraceptive deserts," or areas in which women seeking the most effective forms of birth control —  IUDs or implants — have nowhere to turn.

Women's costs may be higher.

Women may pay more for the same health insurance if the ACA is repealed. The ACA issued a final ruling in May highlighting its regulations that prohibit the discrimination of coverage based on race, color, national origin, sex, age or disability.

These protections have been in place for many years, but for women the ACA has made a big difference. Prior to the ACA, women were routinely charged up to 50% more for the same health coverage — and for some women it was as high as 81%. Even after the ACA was enacted, a gender gap sill persisted.

But with the final ruling this year, the practice of "gender rating," or charging women more because they are considered to be a higher risk (i.e., they visit the doctor more, live longer and have babies), is illegal.

Still, some health care industry analysts believe that insurance companies should be able to use gender rating as a tool in charging patients more.

This suggests that without a mandate to keep insurance companies from charging women more, they may revert to a policy similar to car insurance, in which teenagers can be charged more because of their higher risk.

This would leave women without the protection of gender parity.

The return of rescission.

One of the things the ACA brought you was the peace of mind that should you — healthy, active and young, the kind of person health insurance companies love — get sick, the company cannot cancel your policy.

The practice is called rescission. The ACA outlaws it. With the Republicans' interest in fewer federal regulations and lower costs, there are no assurances that replacement legislation would have such patient protections in place.

In 2010, after the ACA became law but before it went into practice, a trade group of health care companies, America's Health Insurance Plans, proactively said they would stop the practice of canceling policies due to illness. It was viewed as an act of goodwill after a long and drawn out fight over health care as the ACA took shape.

But without a federal law in place, will this trade group-supported voluntary suspension of rescissions still stand?

Let's assume that at least some health care companies would take advantage of a new, less-regulated landscape and return to the practice. That would mean that if you are shopping around for your own individual plan, you should make sure your comparison shopping list looks at whether an insurance company won't cancel your policy should you get sick.