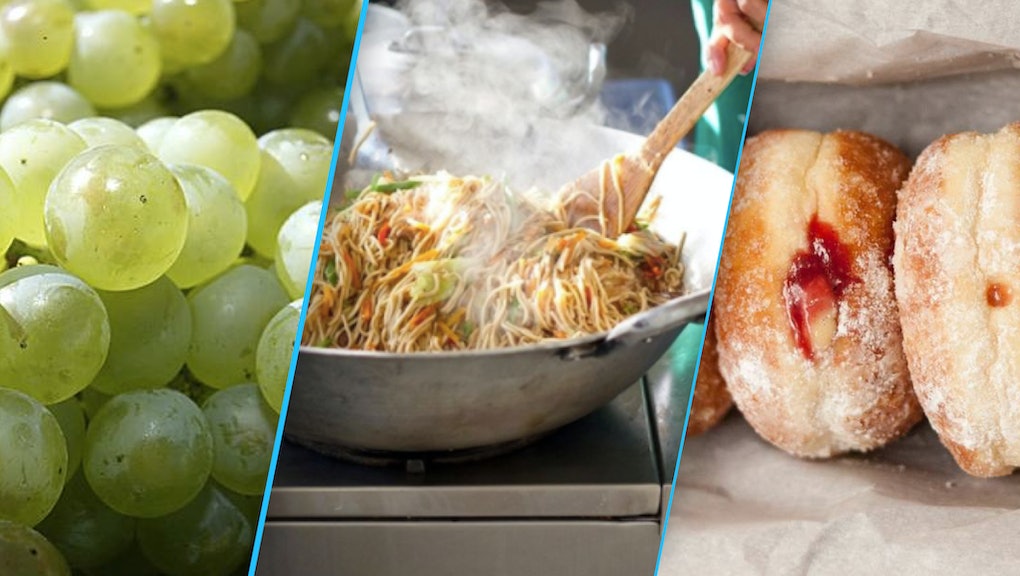 Planning on popping a bottle of champagne at the stroke of midnight on New Year's Eve? Better make that a few bottles — 2016 was a garbage fire year if there ever was one.

Champagne sales skyrocket right before New Year's Eve — roughly 24% of all champagne sold in the U.S. each year is purchased in the week between Christmas and New Year's.

But not all countries ring in the new year with some bubbly. We've rounded up seven of the coolest food-related New Year's traditions around the world. You may want to steal some of these ideas — because why leave 2017 up to fate, and, um, American traditions?

The legend: Instead of clinking glasses of Cava at midnight, Spaniards quickly eat a dozen green grapes, NPR reported. Each little grape represents good luck for each month of the new year.

"It's quite difficult! You have to select small grapes, and eat quickly," Paloma Garcia, spokesperson for Madrid's Palace Hotel, told NPR. "My son, he's very young, and at the end he [always] has a mouth full of grapes — it's impossible!"

The legend: Oprah would like this tradition — it involves noshing on some lucky carbs.

Armenians load their tables with a New Year's feast, Armenian-History.com noted. Pork leg, meat snacks, pastries and fruits are all displayed on tables, but the homemade bread is the masterpiece that's most important. The baker places a coin in the flat, round bread, and the person who receives a slice with the coin is the "lucky" member of the family.

The legend: Surprisingly, the most extreme-seeming Russian tradition for New Year's doesn't involve vodka. Some Russians celebrate the stroke of midnight by quickly writing a wish on a piece of paper, burning it and then putting the ashes in a flute of champagne, the blog Just Russian noted. Drink up while the clocks are chiming and good luck will allegedly come.

The legend: Apples are central to a Czech Christmas tradition performed either at Christmas or at New Year's. After the Christmas meal, every person at the dinner table cuts an apple in half along the core, My Czech Republic noted. If the core looks like a star, everyone will see each other again in happiness and in health. If the core resembles a four-pointed cross, someone at the table will fall ill. Eek!

The legend: Stuffing your face multiple times is a socially acceptable practice on New Year's Day in Estonia. If you eat 7, 9 or 12 meals (the country's lucky numbers), you'll allegedly enjoy a good year.

There's a caveat — you don't need to actually finish a dozen meals to reap the benefits of this tradition. Estonians will leave some food on their plates for ancestors or spirits that visit homes during the holidays, Bangor Daily News noted.

The legend: Life might be considered like a box of chocolates in the U.S., but in Germany, it's a box of donuts with mysterious fillings.

On New Year's Eve, Germans indulge in jelly donuts (aka "berliners" or Pfannkuchen), but some pastry makers like to play tricks on patrons by filling some donuts with mustard, the site Young Germany noted. Getting stuck with a mustard-filled donut is thought to be bad luck. Unlucky Germans who bite into mustard-filled pastry can ward off the bad by eating marzipan pigs or collecting four-leaf clovers, German Missions in the United States noted.

The legend: Filipinos sure are superstitious when it comes to meal time. Legend has it that long noodles (aka pancit) represent a long life and good health, so people eat them at New Year's and on birthdays, travel blog Trekeffect noted.

Since round things are thought to promote good health and prosperity in the Philippines, as well as several other countries, round fruits are also consumed on New Year's, Trekeffect stated. Many people eat 12 different round fruits — one for each month of the new year.