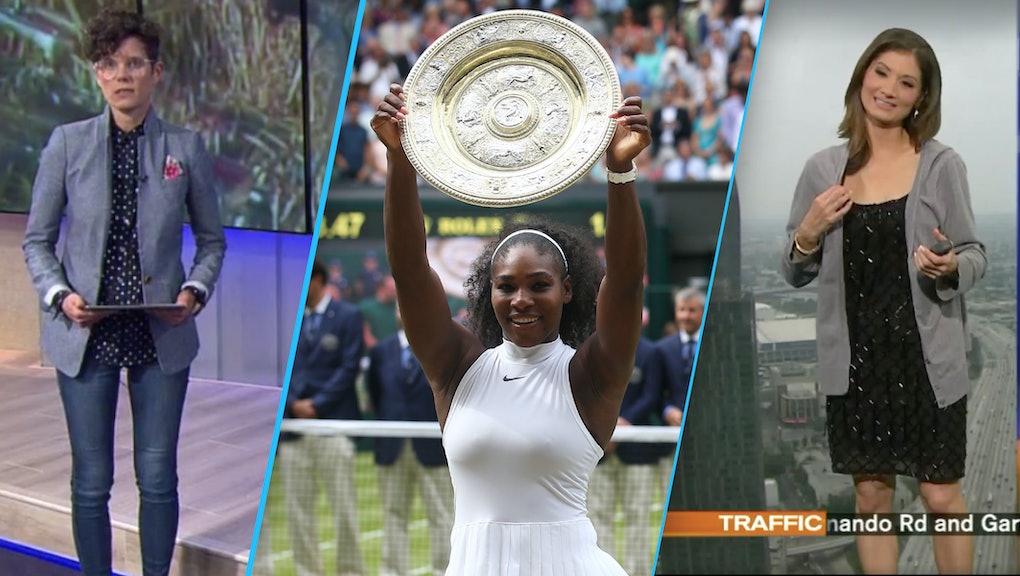 But what's not necessarily always good — yet was incredibly popular in this garbage fire year of 2016 — is loudly voicing your unsolicited opinion when it doesn't matter, at all, in any way, to you or anyone else, and also concerns a woman's appearance.

Like, you can turn on your local news and see a newscaster wearing a necklace you don't like and think, "Eh, not my taste." But would you write to the news channel to tell them how much you hate that woman's necklace?

Shit like this happened all the time in 2016, and it sucked. So here are six very specific instances of people doing the unthinkable and voicing their opinions on a woman's appearance as if it mattered this year.

In April, the United States Treasury announced its plan to replace Andrew Jackson with the abolitionist Harriet Tubman, making her the first woman in the department's 227-year history to appear on American paper currency. All good, yeah?

Well, then came the sexist trolls. Within one day, people on Twitter were bemoaning the decision, taking issue with Tubman's appearance, as if she would care, or as if that mattered at all.

But the joke's on them, because more than six months after the announcement, Tubman is not only still set to be on those bills, she's also ushered in several different women to join her. Susan B. Anthony, Lucretia Mott, Alice Paul, Elizabeth Cady Stanton and Sojourner Truth, who all fought for women's rights, will also be featured on the $10 bill. And on the $5 bill, there will be portraits of Marian Anderson and Eleanor Roosevelt.

May: That time a man thought his opinion on a veteran newscaster's necklaces mattered

The woman in the picture above is Barbara Ciara, a news anchor with more than 25 years of experience who currently works at WTKR, a network for viewers in Virginia and North Carolina.

In May, she received a complaint from a male viewer who thought that she would care about his opinion on her bold and bright necklaces.

In a Facebook post, Ciara wrote, "This is an email I opened from a gentleman viewer after our broadcast last night typos and all — 'All the female reporters and anchors wear litlle to no jewelry but B Ciara wears the biggest and worst jewelry I have ever seen, please have her play by all same rules as every one else.'"

But guess what? That opinion doesn't matter. Know whose does though? Ciara's.

This was Ciara's response:

Thank you so much for watching News 3. I read your email with a great deal of interest. On a day where a multi-million dollar lawsuit was filed against one of our regional jails, A Navy Seal lost his life during training, The Mayor of Suffolk delivered her state of the city address, and an overlooked neighborhood in the East End of Newport News finally gets a grocery store — you noticed my jewelry. Perhaps you are correct, you are so distracted you didn't hear a word I said.

May: That time viewers thought their thoughts on Liberté Chan's exposed shoulders mattered

Liberté Chan of KTLA 5 in Los Angeles was just going about her routine 8 a.m. forecast, when the chance of misogyny suddenly skyrocketed.

You see, as Chan delivered her forecast in a sleeveless black dress, a man off to the side offered her a grey sweater to cover up. "What's going on? You want me to put this on? Why, because it's cold?" a baffled Chan asked on-air.  "We're getting a lot of emails," the man replied.

Emails from viewers, who were apparently concerned about Chan's shoulders.

After the incident, people were infuriated, noting that this type of response wouldn't happen if Chan were a man, and Chan was confused as well.

But know what the best part of this story is? Those opinions, in the grand scope of things, don't matter. What matters is how Chan feels about herself, and she only really seemed concerned with her performance, not her looks.

"Can we talk about my weather performance?" Chan asked in a video posted to KTLA's Facebook afterwards.

June: That time a viewer thought their opinion on a meteorologist's "garish jewelry" mattered

In June, a viewer wrote an extensive letter to CNY Central about meteorologist Molly Matott's on-air looks and, more specifically, her "garish jewelry" and "clashes in color."

"There are so many things going on here and none of them are good, the range is from underarm boob fat, garish jewelry, clashes in color, AND makeup," the letter, which was released by WUSA 9, read. "I just turned on my television set and was shaken to the core (almost) at the sight of all of that going on this early on a Saturday morning!"

But guess what? That opinion doesn't matter. What matters is only how Matott feels about herself, and apparently she feels pretty damn good.

In a rebuttal post on Instagram (which has since been deleted), Matott wrote: "I was feeling WAY TOO GOOD about myself today to NOT reply to this nasty email (top left). If anyone else has any comments on my 'underarm boob fat,' I'll take them now. UPDATE: This person wrote back and could not understand my reaction to their 'constructive criticism.' Girl bye."

July: That time tennis fans thought their opinions on the body of the greatest athlete of our time mattered

In July, Serena Williams, arguably the greatest athlete of our time, competed at Wimbledon and won, giving her a record 22 Grand Slam titles. That's the story, right?

Wrong. The story was that while Williams was playing, lots of people on Twitter had opinions about how Williams' breasts or, more specifically, how her nipples looked in her white Nike ensemble.

Do you think this poll below would have been made if Williams was a man?

In the end, of course, as with all of these instances, these opinions didn't matter. Williams won. She secured yet another record. She continued to fucking rule and be one of the best athletes of our generation. So there.

September: That time a columnist thought her opinions on a news anchor's skinny jeans mattered

Back in September, KARE 11 news anchor Jana Shortal became the victim of a harsh fashion critique from the columnist C.J. at the Star Tribune.

After watching Shortal report on the story of Jacob Wetterling, whose remains were found in Minnesota 30 years after he was abducted, C.J. felt compelled to offer criticism about what Shortal had decided to wear: a blue blazer, a polka dot shirt and — horror of horrors — a pair of skinny jeans.

"She looked great from the waist up in a polka-dot shirt and cool blazer, but the skinny jeans did not work," C.J. wrote in a column that is now deleted. "I was among a number of media types who found them inappropriate and, given the gravity of the day's subject matter, downright jarring."

C.J. even went on to say the pants were disrespectful to wear, writing, "Being hip in skintight pants while discussing this story was unseemly, perhaps disrespectful."

And yes, just like all the other critiques of women's appearances that happened this year, this did not matter. What matters here, obviously, to Shortal and her viewers, is that she offered an engaging and informative update on Wetterling, which she did.

So here's hoping that 2017 has fewer people offering up their uncalled for opinions on women's appearances, and more women doing their goddamn jobs in peace.