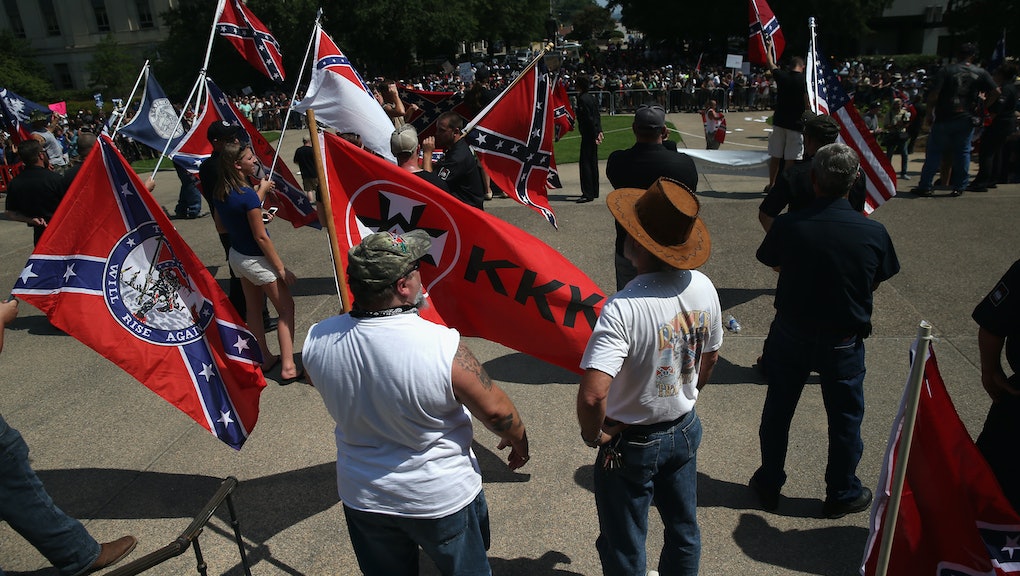 In the wake of the 2016 election, many are wondering how to get through to the white supremacists and Ku Klux Klan members who may now feel emboldened by President-elect Donald Trump's victory.

Daryl Davis' solution? Befriend them, one by one.

For the past three decades, Davis, an African-American blues musician who has played with such artists as Chuck Berry and Jerry Lee Lewis, has made a point of seeking out and talking with members of the KKK, even going so far as attending their rallies. At the heart of his quest, he told the Independent, is one question: "How can you hate me when you don't even know me?"

As a result of his lifelong fascination with racism and its motivations, Davis has befriended a number of Klansmen, including Imperial Wizard Roger Kelly and former Maryland Grand Dragon Bob White, who CNN reports is one of Davis's closest friends.

Davis' relationships with KKK members and the effect he's had on them is the subject of a new documentary, Accidental Courtesy: Daryl Davis, Race & America, which is now in limited release and will be available on demand and broadcast on PBS in early 2017.

In addition to the friendships he's forged, Davis' efforts have also changed minds, with a number of KKK members deciding to quit the group as a result of their interactions with Davis. (The Daily Beast counted 25 converted Klansmen.)

Davis even takes credit for ending the KKK chapter in his local area of Maryland. "The three Klan leaders here in Maryland, Roger Kelly, Robert White, and Chester Doles — I became friends with each one of them — when the three Klan leaders left the Klan and became friends of mine, that ended the Ku Klux Klan in the state of Maryland," Davis said on the Love + Radio podcast. "Today there is no more Ku Klux Klan in the state. They've tried to revive it every now and then but it immediately falls apart. Groups from neighboring states might come in and hold a rally ... but it's never taken off."

Converting KKK members, Davis says, has never been his ultimate goal, however. "I simply gave them a chance to get to know me and treat them the way I want to be treated," Davis told the Daily Mail. "They come to their own conclusion that this ideology is no longer for them. I am often the impetus for coming to that conclusion and I'm very happy that some positivity has come out of my meetings and friendships with them."

Davis further explained the logic behind his efforts on the Love + Radio podcast, as transcribed by the Atlantic:

The most important thing I learned is that when you are actively learning about someone else you are passively teaching them about yourself. So if you have an adversary with an opposing point of view, give that person a platform. Allow them to air that point of view, regardless of how extreme it may be. And believe me, I've heard things so extreme at these rallies they'll cut you to the bone.

Of course, many fellow black Americans and advocates for racial equality don't see Davis' efforts in the same light. Davis reports he's been called "Uncle Tom" and an "Oreo" and, according to the Atlantic, had one NAACP leader tell him, "We've worked hard to get 10 steps forward. Here you are sitting down with the enemy having dinner, you're putting us 20 steps back."

Still, Davis isn't swayed. Per the Atlantic, Davis said in response, "I pull out my robes and hoods and say, 'Look, this is what I've done to put a dent in racism. I've got robes and hoods hanging in my closet by people who've given up that belief because of my conversations sitting down to dinner. They gave it up. How many robes and hoods have you collected?' And then they shut up."

But some activists aren't so quick to accept Davis' methods. The documentary, the Daily Beast reported, includes an exchange between Davis and Black Lives Matter activists that, Davis said in a post-screening discussion, "almost erupted in fisticuffs."

"What does that do for people?" BLM activist Kwame Rose asks Davis about his KKK efforts in the film. "Infiltrating the Klan ain't freeing your people. Befriending a white person who doesn't have to go through the struggles of you, me ... that's not an accomplishment. That's a new friend. That's somebody you can call."

"Just like the young man said to you," community organizer JC Faulk later tells Davis in the documentary regarding Rose's remarks. "You could have done a whole lot more work in the black community from the '90s to now to move our people forward rather than coming in here trying to uplift somebody because you got a hood off of their head."