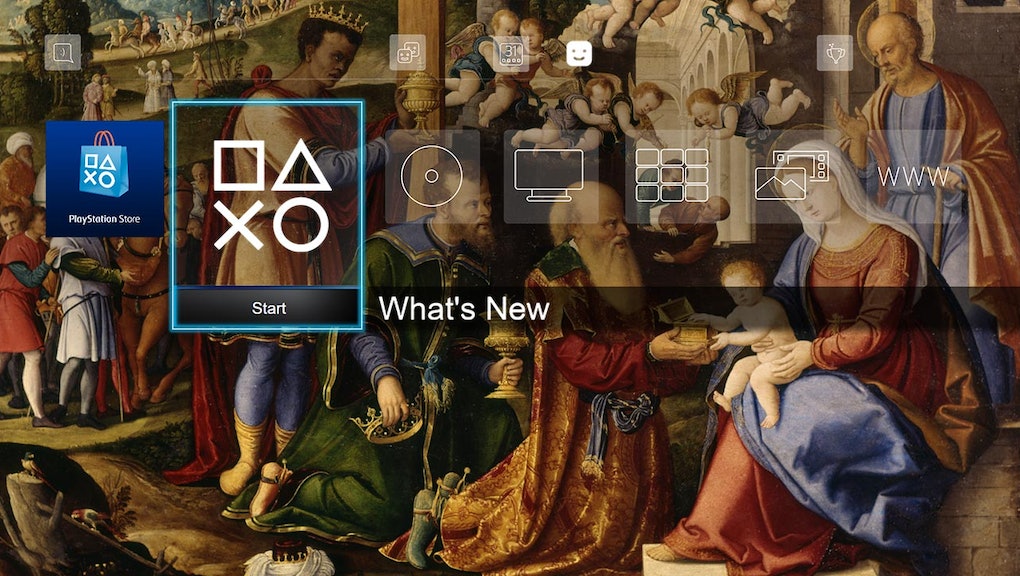 PS4 Themes: The 6 most baffling custom themes you can download from the PlayStation Store

I've had a PS4 since the console first came out in 2013, but one area of the PlayStation Store that's remained a bit of a mystery to me is its "themes" section. If you have yet to venture into this particularly hellish portion of the PlayStation Store, it's where you can purchase alternate appearances for your PS4's home screen. Some just alter the background images; others are dynamically animated, modify the appearance of icons and add custom music. Usually, they cost about $3.

I've searched through the themes on the PlayStation Store a couple of times in the hopes of giving my home screen a makeover, but found it largely a wasteland of strange, low-quality stock images. I nabbed a gorgeous Firewatch theme when the game first came out and haven't looked back since.

That is until I saw this tweet of a PS4 theme featuring skeletons dancing in some sort of tropical paradise to jaunty Latin music.

In that moment, I knew I needed to know more. Who develops these themes? Is there some kind of approval process? What other absurd themes are lurking in the depths of the PlayStation Store? Just how deep does this rabbit hole go?

As it turns out, the answer is "pretty damn deep."

How do PS4 themes get approved?

According to a page for would-be PS4 developers on Sony's website, it seems like the process for developing PS4 themes is pretty similar to the process for getting certified to publish and sell full games.

Here's how it works, according to an interview on PlayStationLifeStyle with Truant Pixel, a development studio that's created several PS4 themes:

Themes for the PS4 require formal development tools and distribution is only through PSN. In order to do this, [Truant Pixel] went through the standard registration process to obtain the hardware as well as the authorization to create content and submit it to the PlayStation Store.

But, uh, the approval process for individual themes doesn't seem to be too thorough. At least, it doesn't seem to account for taste. Here are some of the strangest, most horrifying, baffling themes I found through a quick search on the PlayStation Store.

Prepare yourself. It gets weird.

For simplicity's sake — and for your own mental health — I'm showing this nightmarish PS4 theme as a GIF. But if you want the full experience, click on the link above to view a clip of the theme, audio and all.

Alternate title: What fresh hell is this?!

In all seriousness, I appreciate that whoever designed this theme made the two dismembered halves of the guy's face wave playfully back and forth, as if to gently say hello to the viewer from the other side of the screen.

I considered just posting a GIF of this one, too, but the music and sound effects are a truly integral part of the overall experience.

Developer NiKo MaKi offers several themes on the PlayStation Store, but 'Wacky West" is probably the best. The strangely phrased "Un-Normal" and "Spy On" are close seconds, though.

This one's pretty simple, but I had to include it because it seems alien and familiar all at once. I know I've never seen this theme out in the wild, but I can't shake the feeling it'd be perfectly at home in every guys' college dorm room across the country. Just make sure it's not too close to your Scarface poster. They might clash.

Never a bad time to praise God, am I right?

I legitimately have no idea what the hell is going on anymore. Apparently, "Georgie Porgie" is the name of both a nursery rhyme and a song by A Tribe Called Quest, but I have no clue where the theme's text is from. Am I missing something? Is this art? Is it actually a brilliant deconstruction of the failures of our capitalist economy? Send help.

If you're on the hunt for more gaming news, check out some of Mic's other gaming content. Here's how to register for information on Super Mario Run for Android, information on the latest Pokémon Go nest migration, a ranking of the Overwatch character roster and our list of the best games you can get for PS4 and Xbox One.