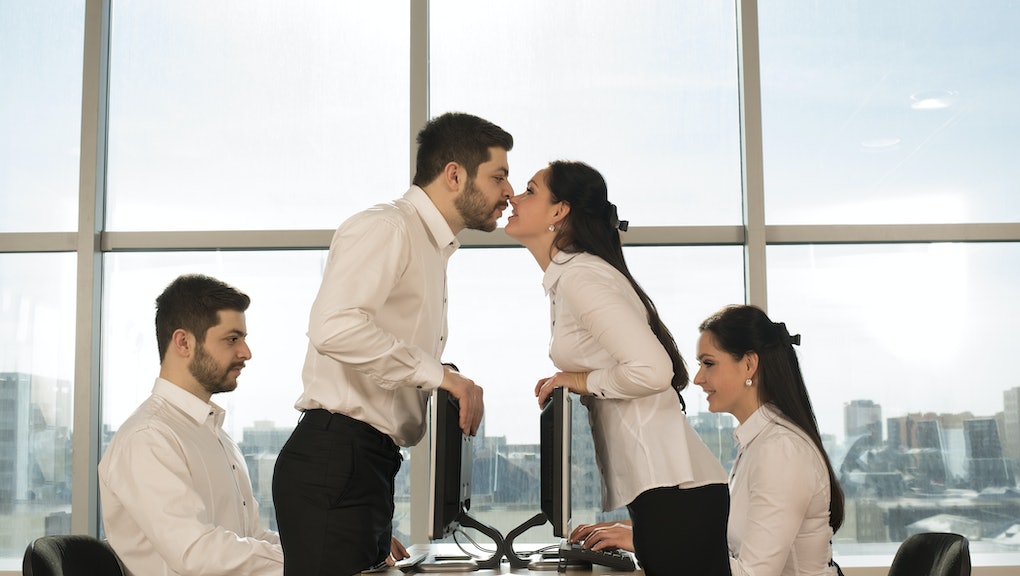 Should I date someone I work with? Here are 3 rules for office romances

There's a good chance anyone reading this has dipped their nib in the office ink, so to speak. After all, you clicked this link, right?

There's a pretty obvious explanation for all this extracurricular activity at the office: Most of your waking hours are spent with your coworkers.

"Spending more time with colleagues outside of contracted hours means getting to know them on a more personal level is inevitable and that's where romance can flourish," Trilby Rajna, website and content editor for the Approved Index survey, told Mic in 2015.

This trend, though, isn't always a good thing. With the blurring of professional and personal boundaries, it also makes those involved more susceptible to messy situations.

Close to a third of male respondents in the Vault survey who admitted having had a workplace romance said they regretted it — and 43% of women who'd dated colleagues said the same thing.

Given how common it's become, it's important to establish some ground rules designed to minimize potential messiness.

Have an exit strategy

With less than 10% of Vault respondents meeting their spouses at work, it's probably a good idea to prepare for the possibility your workplace romance won't turn into a lifelong thing.

Imagine the worst case scenario — a messy, painful breakup, for instance — and make sure you know how you'd get out of it alive.

If you can't devise a clear exit strategy — maybe you work on the same team and sit next to each other — then it might not be the best idea to date that person. Imagine how excruciating it would be to have to sit next to a recent ex day in and day out.

But if you work on different teams or you're thinking about moving onto a different company anyway or you're dating someone mature, who doesn't like drama, then you're more likely to be able cleanly to extricate yourself.

Make sure you're not violating company rules

This one might seem kind of obvious, but it's probably worth referencing the company handbook or having a conversation with HR if you start to date one of your coworkers. You don't want to get fired over a dalliance or, worse still, open yourself up to a possible lawsuit (remember: heartbroken people can get erratic).

This is particularly pertinent if the two people involved are a subordinate and their superior.

And if there's any legal ambiguity around the relationship, it's probably best to minimize a virtual paper trail on company email and internal messaging — i.e. save the dirty pics for Snapchat, not Slack.

Lay out some ground rules

Be clear with each other about do's and don'ts.

It's probably a good idea to keep the romance completely out of the office, so make sure you're both on the same page about acting professionally at work. This both minimizes the chances of professional backlash and will make a potential post-breakup transition much easier — you wouldn't be acting any differently around each other in the office.

Having ground rules also helps establish clearer professional and personal boundaries, without which, messiness can ensue. If you both agree to save the lovey-dovey stuff for happy hour or back at home, it not only looks better, then there won't be hurt feelings if you act differently around each other at work. And it can also make things more exciting if you let a day's worth of sexual tension build up before going on date night.

Of course, there's no magic formula. But if you follow these rules, it's likely to make things a little easier.