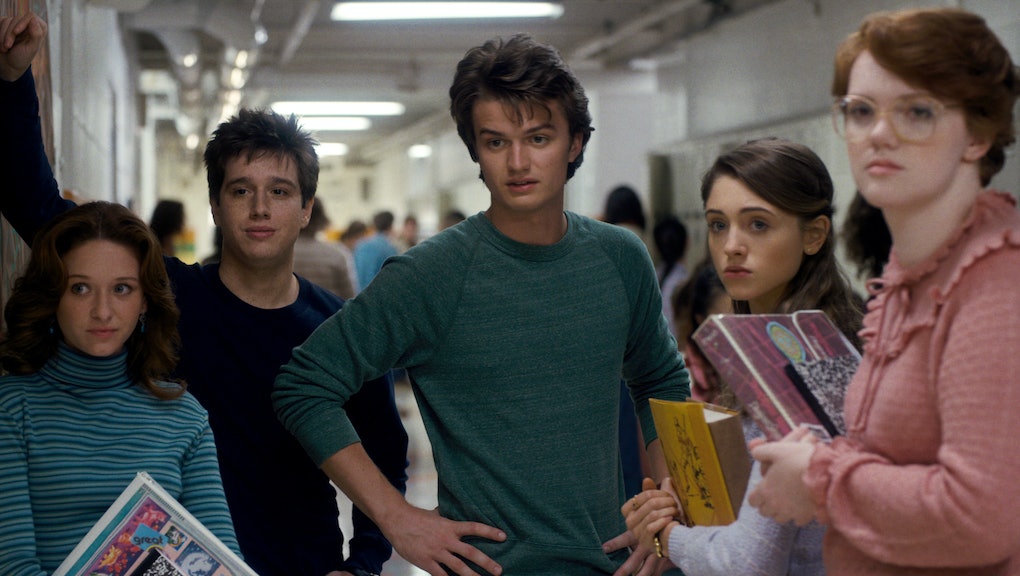 The thing about TV — and this is also true about real life — is that people die, people we grow to care about. Sometimes these deaths feel gratuitous or unwarranted, a means to drive plot, but other times they are more nuanced, fitting for a character's arc and for the themes of a show. From Game of Thrones to Scandal, below are some of 2016's most memorable TV deaths.

(Editor's note: Major spoilers ahead! Consider this gif of a unicorn your chance to turn back.)

Season four, episode four — Unlike so many shows, The Americans doesn't kill off its characters unless it absolutely must. Unfortunately, this became the case in season four of the FX drama series. In its first season we met Nina Krilova, a KGB agent blackmailed by an FBI agent to work as a double agent for the United States. Feeling guilty, she eventually reveals this to her Russian supervisor and becomes a triple agent, and must balance expectations set by both her home country and the FBI. Nina's lack of true loyalty, however, ultimately lands her in Russian prison, where her execution is swiftly carried out. First she's given her death sentence, then she breaks down in tears, and a moment later a bullet enters through the back of her skull. The scene leaves little time to mourn a character who may have had few ideological motivations but certainly proved that she could take care of herself.

Season four, episode nine — Assuming that Bates Motel would lead up to what we know from Alfred Hitchcock's classic film, then the death of Norma Bates was truly inevitable. Norman's codependent relationship with his mother comes to a head in the penultimate episode of the fourth season. Romero, Norma's husband, and her other son Dylan see that he is unwell and want him to be re-institutionalized. Norman feels this pressure, all the more so when he finds Emma's mother's suitcase in their home, leading him to believe that either Norma or him (when he experiences blackouts) committed a murder. Feeling doomed, he decides to commit murder/suicide through gas poisoning, but unfortunately for him, the episode ends with only Norma dead.

Season three, episode one — The season two finale of Empire saw a balcony fight between Anika and Rhonda, the devoted wife to Andre Lyon. Earlier in the series, Rhonda was pushed down a set of stairs by Anika, causing her to miscarry, and ever since the tension between the two women — unfortunate enough to fraternize with the Lyon clan — has run high. Someone was pushed off the balcony in the finale, and the third season premiere of the Fox series reveals that it was Rhonda who had to go.

Season six, episode five — He may not have been a man of many words but Hodor's death on Game of Thrones still left a huge impact, which says a lot considering, you know, that everyone on the HBO fantasy series dies at some point. In episode five of the remarkable sixth season, we finally learn about Hodor's past — just for him to die. We learn that Hodor comes from "hold the door," and that the giant man is the way he is because of Bran's meddling. After Bran goes into Hodor's mind, back to his past, we see that he was once a stableboy. Bran's interference causes a problem in his brain, which leads to his death by holding the door for Bran and Meera and saving them from the White Walkers.

Season six, episode 10 — When Margaery Tyrell was introduced to Game of Thrones as Renly Baratheon's bride, she immediately became a fan-favorite, and one of the more entertainingly manipulative characters on Game of Thrones. After Renly was killed, she married Joffrey (also killed), and later Joffrey's younger brother, the sweet Tommen. During her time at King's Landing, Margaery proved to be a formidable foe to Cersei Lannister, manipulating Cersei's sons and later the High Sparrow. Her scheming came to an end early in the finale of Game of Thrones's sixth season after Cersei decided to light the place on fire using wildfyre. There were several casualties to her decision, but Margaery was the most notable to go.

Season four, Episode 12 — The second to last episode of Orange is the New Black proved that the Netflix series works just as well as a drama as it does as comedy. Throughout the season, chaos brews throughout Litchfield and it all culminates in the murder of one of the kindest characters on the series: Poussey Washington. The episode functions both to show how the prison industrial complex can make monsters out of anyone, even the best of people, and also serves as as Black Lives Matter tribute. Suzanne goes wild and while trying to help, Poussey is pinned down by a security guard, completely unaware that the way he is pushing her down doesn't allow her to breathe. He kills her, and in the way the prison decides to leave her body on the floor until they can decide what to do with her, Orange is the New Black shows how dehumanizing our world can be.

Season five, episode 17 — Ok, so the death of Andrew Nichols — the former vice president — isn't exactly the most devastating loss we see on Scandal. Nevertheless, we still feel a huge loss in season five of Shonda Rhimes' show starring Kerry Washington. Nichols' brutal scene takes place in a White House bunker, where Olivia Pope meets with him and is triggered by a memory of her own abduction — at his hands. In a fit of rage, Olivia starts hitting him over and over again with a metal chair. Nichols dies but given that so many characters on the series murder so carelessly, the true loss is Olivia's innocence.

Season one, episode three — One of the biggest discussions to come out of Stranger Things was the death of Barb, a seemingly insignificant secondary character who was killed off so swiftly and so unfairly. It angered people, including the actress who played Barb. The geeky character was the loyal friend to Nancy, and after she gets dragged by the Demogorgon to its mystical lair (and later killed), we don't see much or hear much of her again. Barb was a loyal friend to Nancy, the friend who never succumbed to peer pressure, and while the show is preoccupied with young Will's disappearance it forgets about a memorable albeit small character who's loss should affect those closest to her.

Season six, episode nine — Before Negan showed up with his barbed wire bat, The Walking Dead aired a pretty intense death scene. While attempting to escape Alexandria after it became overrun with walkers, Rick was forced to chop off the arm of his love interest, Jessie. Although Jessie was already getting eaten alive by walkers by that point, Rick essentially sealed her fate.

The Walking Dead — Abraham and Glenn

Season seven, episode one — Season six of The Walking Dead ended with a cliffhanger when the cameras failed to show who Negan killed with his barbed wire bat. Fans of the AMC series ultimately learned in the season seven premiere that Negan actually took the lives of two Alexandria survivors — Abraham and Glenn. Although viewers weren't happy with the delay, the double murder definitely came as a surprise.