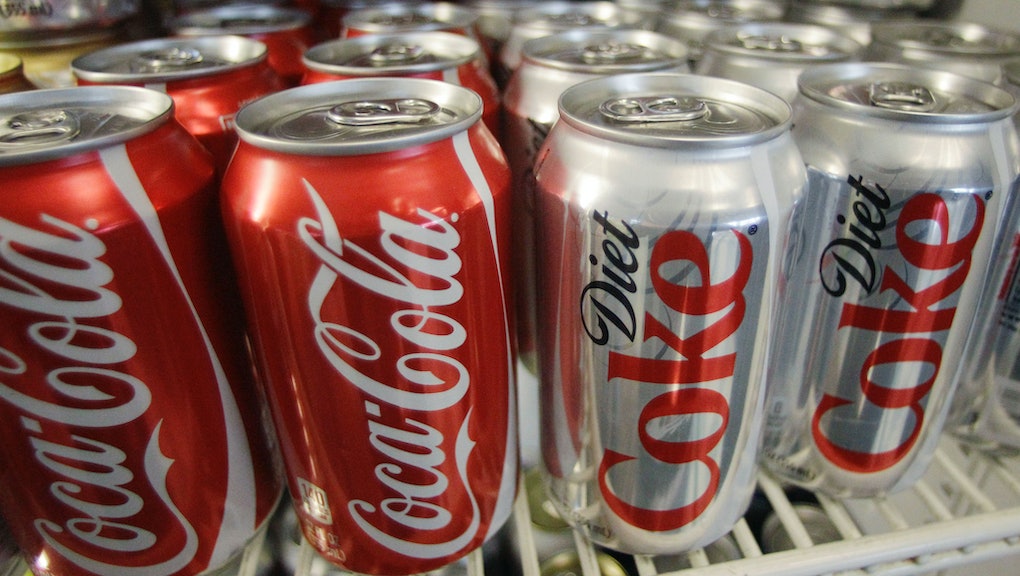 Food marketers will do just about anything to convince consumers to buy a product. Recruiting celebrities for endorsements? Check. Using meaningless terms like "natural" on labels? Check. Pretending a product is the most healthful choice around? Check again.

Roughly 75% of Americans say they eat healthy, NPR reported. But what they say is much different than what they do — a whopping 80% of people aren't eating the recommended amount of fruits and vegetables, NPR pointed out.

If you're trying to eat healthier, don't let the food industry take you for a fool. From the myth of diet soda to the idea that probiotics definitely ease indigestion, here are five health hoaxes to avoid.

Reality: Diet soda has no effect on weight loss.

Sorry, diet cola fans — your beverage might not have as many calories as regular cola but it's not a healthy choice. Research shows that people who regularly drank diet soda over a nine-year period had a greater increase in waist circumference compared to people who did not drink diet soda. Another study found that diet soda drinkers had the same health outcomes as regular soda drinkers, CNN reported.

What's to blame? Some researchers believe artificial sweeteners can damage the gut and raise risk of diabetes or potentially cause people to keep craving sweets. (In other words, the sweet taste of diet soda makes you crave other sugary items later on.)

It might sound counterintuitive that a diet product is no better than the regular one, but when it comes to soda, drinking water to quench your thirst is better than any kind of pop.

Avoiding egg yolks is better for your health.

Reality: Egg yolks provide essential nutrients, and cholesterol isn't the devil it's made out to be.

Egg yolks used to be public enemy number one because they contain a significant amount of cholesterol and saturated fats. In 1973, the American Heart Association recommended excluding eggs from one's diet because researchers believed yolks rich in cholesterol could raise risk of heart disease.

But researchers have disputed these guidelines in recent years. One large study published in the British Medical Journal found that eating one egg per day was not associated with risk of heart disease or stroke.

Plus, the yellow yolk provides many good-for-you nutrients. Roughly 40% of the protein in an egg comes from the yolk, U.S. News and World Report noted, explaining the yolks also contain choline and selenium (good for pregnant women as these nutrients aid in fetal brain development) and riboflavin, vitamin D and vitamin B-12. Yeah, that egg white omelet isn't doing you or your taste buds many favors.

Drink skim, stay thin? The non-fat milk might not be advantageous as previously believed. A study published in 2016 found that over a 15-year period, people with high levels of byproducts of eating full-fat dairy actually had 46% less of a risk for developing diabetes than people who did not have markers of eating full fat dairy, Time reported.

"There is no prospective human evidence that people who eat low-fat dairy do better than people who eat whole-fat dairy," study author Dariush Mozaffarian told Time. So if you grew up drinking and hating skim milk, you can switch to the regular stuff — in moderation, of course.

Juices and "detox" drinks can cleanse your body of toxins and help you lose weight.

Reality: Juice cleanses are expensive rip-offs and won't make you any healthier.

Spoiler alert: Juices are very expensive bottles of sugar water that are a complete waste of time if you're trying to get healthier. Your body can rid itself of waste and toxins (like alcohol) all by itself, Mic previously reported, explaining that the liver can regulate your body all on its own.

"The human body is well designed to eliminate wastes and toxins, and a number of organs play a role," Dr. James H. Grendell, chief of the division of gastroenterology, hepatology and nutrition at Winthrop-University Hospital in Mineola, New York, told the New York Times when asked about juice.

Sadly, any over-the-counter "cleansing" drinks could potentially be deadly. A case report in the British Medical Journal detailed how a woman had seizures associated with hyponatremia (low sodium in blood) because she had been drinking herbal medicines with valerian root, meant to detox, Vox reported.

Reality: Scientists aren't sure if probiotics have a lasting impact on gut health.

Gut check: Yogurt and other probiotic-rich foods might not be a cure-all for your chronic constipation, despite what food marketers at Activia may want you to believe.

Ed Yong, author of I Contain Multitudes, a book about gut microbiota, told Terry Gross of Fresh Air that probiotics in food aren't very potent. Yong explained that food manufacturers sometimes choose probiotics based on how easy they are to manufacture, not because they will help gut health.