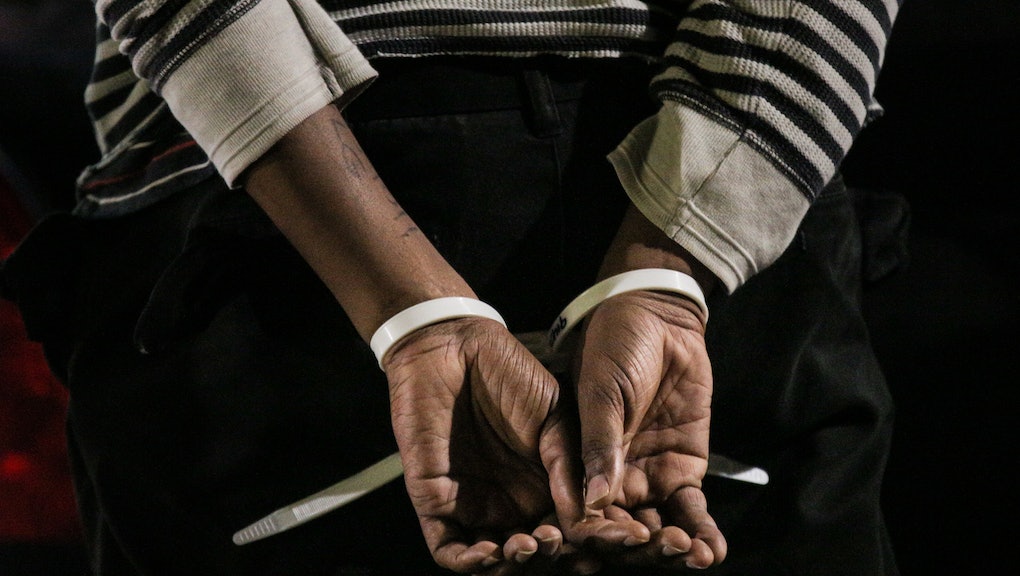 Here's what to do if you get arrested at a protest

Donald Trump will be inaugurated as president on Jan. 20, and countless thousands are expected to descend on Washington to begin their resistance on day one. If the sometimes violent Inauguration Day protests of the past are any indication, there could be clashes with police — and lots of arrests.

What should you do if you're arrested at Trump's inauguration?

The same things you would do if you got arrested at any other protest.

Mic dug through activist resources and spoke with lawyers from the American Civil Liberties Union and the First Amendment Coalition to bring you the most important tips for preparing to be arrested during a protest.

The first thing you can do is some research ahead of time. If you're going to take part in a mass action, find out if the action has permits, and what the conditions for those permits are. Almost a dozen groups are planning such actions for Trump's inauguration, and permits are being issued as the big day approaches.

If you're going as an individual, find out which spaces are cordoned off ahead of time, and plan your protest for a public space available to pedestrians. To help avoid confrontations with police, avoid covering your face or carrying large, heavy objects.

And bring a phone number for legal support. You can write down the number of your local chapter of the ACLU or National Lawyers Guild, or use your state's bar association to get in touch with someone who handles First Amendment issues.

If the protest has a legal team — the anti-Trump protests in 2017 will have them present at certain sites — find them, and see if they're offering advice and contact numbers. Once you have the proper phone numbers, write them down in sharpie on your arm.

Next up, carrying government-issued ID can help you get out of jail quicker.

Lastly, if you're bringing expensive electronic equipment or photography gear, label everything with your name. At Standing Rock, the media was advised that this increases your chances of having those items returned to you if they're taken during your arrest.

If you're unsure whether you're being arrested, calmly ask if you're free to go. If the cops say no, that means the arrest has begun. The first thing you should do is comply with the arrest and resist the urge to fight back, physically or otherwise.

If you find the arrest objectionable — you believe it wrongful, or cops are using force — Snyder says that the best place to challenge the arresting officer is after the fact in court, with the help of legal representation.

If you know that the organizers of the protest have legal observers present at the arrest, you can shout out your name and information to them. Otherwise, the best thing to do is to stay silent, not give up any incriminating evidence, and say nothing but: "Can I speak to an attorney?"

Jail is boring, but don't be tempted to run your mouth to either police officers or other inmates. Instead, work on getting in touch with legal support or a family member who can get you representation.

As the ACLU's Lee Roland pointed out, getting arrested doesn't necessarily mean you'll have a criminal record afterward. Roland said in an interview that it's a common practice in recent years to simply arrest protesters and then release them later without arraignment.

"Most people who are arrested at protests are only arrested on a misdemeanor," Roland said, "and many people aren't even charged."

But that doesn't mean you shouldn't still be prepared. The lawyers we spoke to agreed that, either way, getting legal representation as soon as possible will help speed your way out of jail.

"You have the right to record your surroundings in public, including the actions of law enforcement," Roland said. "If you witness what you believe to be a wrongful arrest or the use of excessive force by law enforcement, you have every right to record that act, so long as you are not interfering with an officer's ability to do her job."

If you've been injured, get photographs from multiple angles in different lighting scenarios, capturing as much detail and over a long period of time. If the injury is serious, see a doctor as soon as possible, since medical records hold additional weight with a judge.

Avoid arrest in the first place

The best way to deal with arrest, of course, is to never be arrested in the first place.

Be aware of your surroundings. Your First Amendment rights are largely protected on public property, but if you end up on private land, you can be arrested for trespassing.

"Be aware of your surroundings and the property you're standing on," Roland said. "Individuals who are not part of a bigger event have the right to engage in protected speech and protest in sidewalks and public parks as long as they're not obstructing traffic."

You have no constitutional obligation to be polite to the police, and lawyers will still defend you in court no matter how you conduct yourself. But it's still wise to keep a cool head. If officers strike up simple conversations or make basic requests for information without threatening arrest, you can often help your own case simply by being calm.

"It's incumbent on police to deescalate situations, but it certainly doesn't hurt when people interacting with the police try to remain calm and deescalate the situation," Roland said.

Another way to deal with police is to be attentive to police instructions. Police will often shout commands to disperse or move locations before arresting anyone.

"Obeying lawful commands is a good first step in avoiding arrest," Roland said. "If law enforcement gives commands during a protest, such as to move out of the way of traffic, you generally have to obey a lawful command to avoid arrest."