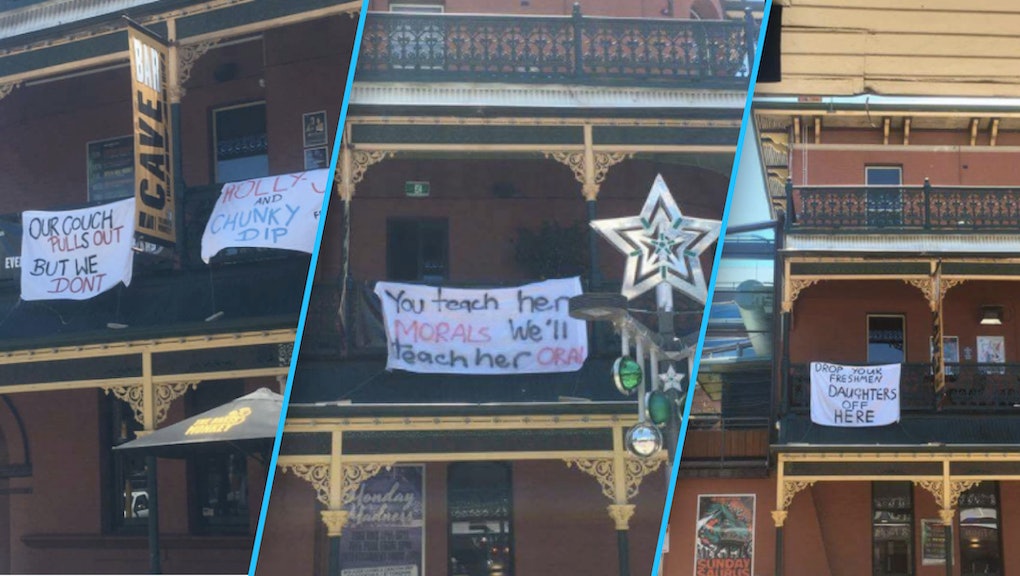 Sure — why not ring in the New Year with a raging celebration of virulent misogyny?

Such appeared to be the logic of the staff at Australia's Brass Monkey Hotel bar, who decided to throw a fraternity-themed New Year's Eve fete. According to the Guardian, the pub had promoted its bash with banners reading, "You teach her morals, we'll teach her oral," "Our couch pulls out but we don't," "Daughter drop-off point" and the like.

Twitter users and local news outlets slammed the bar for the sexist messages, calling the banners and the theme itself demeaning. Artist Joel Fletcher, who was slated to perform at the bar that night, even canceled the gig in protest.

"I don't condone any of this and won't be going ahead with my show there on New Year's Eve," Fletcher announced on Friday. "Sad."

Following the backlash, the Brass Monkey issued an apology on its Facebook page Thursday, writing, "The team meant no offense or harm to anyone by the messages written on these banners and can see how they are inappropriate."

The bar added, "The team at the Brass Monkey Hotel would like to apologize for anyone affected by these messages and hope that you have a great New Year's."

The banners, the Brass Monkey said, had been permanently removed.

The Brass Monkey's simple Facebook apology might have been enough, had its blunder not been a part of something much larger. Rape culture, the mechanism that normalizes sexual assault, blames victims and largely lets privileged white men get away with it.

Unfortunately, the Australian pub's imitation of frat culture had been all too apt. In August 2015, Old Dominion University's Sigma Nu chapter in Norfolk, Virginia, welcomed incoming female students and their families with a series of similarly demoralizing banners. They read, "Hope your baby girl is ready for a good time," "Freshman daughter drop off" and "Go ahead and drop off Mom too."

Frat houses have also been the site of countless sexual assault cases this year alone — not out of coincidence, but because multiple studies have found that men who join fraternities are three times more likely to commit rape.