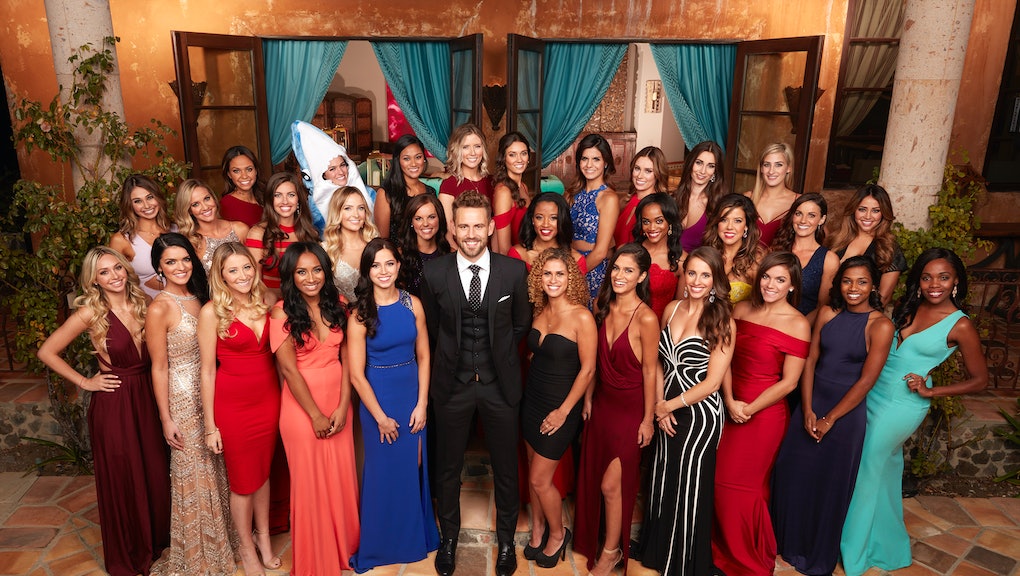 'The Bachelor' 2017 premiere: Who did Nick Viall send home on the first night?

Strap yourselves in: The Bachelor is back in action.

It's been a year since we last delved into the world of roses and right reasons on ABC, when we watched Ben Higgins mark time for a number of weeks before finally choosing Lauren Bushnell, as literally everyone (including the other contestants) knew he would. We suffered through Jojo Fletcher's underwhelming Bachelorette season and lamented which of her cast-offs would become the next bachelor in an increasingly dull format.

Then ABC cast Nick Viall, three-time Bachelorette and Bachelor in Paradise rejectee, as the bachelor. And judging from everything we've seen so far, we're in for one hell of a season.

For the premiere, Mic's trusty Bachelor team — senior arts writer Kevin O'Keeffe, news writer Anna Swartz and news editor Jordyn Taylor — will be liveblogging all the ups, downs and otherwise right here. Who will amaze us early? Who will impress Nick? Who will act a fool? Let's find out together.

Kevin O'Keeffe: It's time, ladies and gentlemen of Bachelor Nation! It's time to see if Nick can finally score a proposal — or at least a spot on Dancing With the Stars — after three failures on national television. Give him credit: He at least seems to understand his role on the show.

Jordyn Taylor: Except he can't sit sideways on a couch.

Anna Swartz: Nick is an expert. But also, this is his fourth season on a Bachelor franchise show.

JT: Chris Bukowski did four! If you count him showing up at the mansion and trying to get on Andi's season.

AS: I count it. They keep calling him "the most controversial bachelor in history." Is Nick the Donald Trump of Bachelor Nation? Nah, he's more Bernie Sanders.

JT: Juan Pablo was obviously the most controversial bachelor in history.

AS: This is like when Aidan came back on Sex and the City and he was way hotter.

KO: Out of Nick's 189 siblings, I'm most fond of his youngest sister, who spends most of the beginning of the premiere dragging Nick for being a trash human.

AS: She's grown so much since we first met her! #NicksSister2017

JT: Nick has one of the most important qualities for a "good" bachelor: he genuinely fears ending up alone. Like Ben Higgins. The stakes are high, unlike with Chris Soules or Juan Pablo, who were super self-centered. You didn't get the sense their entire lives rested upon finding a wife.

KO: I'd argue that's performative, though. I don't think Nick is really on his fourth Bachelor show because he really wants a wife.

AS: Nick also works the show way better than Ben. But, he is playing for sympathy, which is weird for a hot famous guy with a million female fans.

JT: Let me rephrase: He genuinely fears not winning the show, whereas I don't think Chris Soules gave a real shit whether he ended up with a wife.

AS: Ugh, Chris Soules. Was it his hometown date when they played hide-in-the-corn?

KO: Speaking of the former bachelors, several of them are here! Ben Higgins is busting poor Nick's balls!

AS: Laughing at their "listening" faces. Their eyes are all scrunched up from all the concentrating.

KO: "Nick has some baggage coming in," Ben says, underlining the thesis of the season.

JT: Do you guys remember the joke Sean Lowe played on Emily Maynard on his hometown date? When he put the stuffed animals around his room and made it look like he still lived with his parents? And I'm convinced Emily still doesn't understand that it was a joke?

AS: You love that story, Jordyn.

JT: It's my favorite story.

KO: Ahead on tonight's episode: Everyone is wearing red! And that is a scandal, for some reason!

KO: This is related to nothing except the fact that ABC just aired a promo for it, but: Everyone go see Hidden Figures! It's so good!

AS: All my friends saw it without me while I was working the night shift! Now I'll never know if they made it to space.

KO: It is kind of sad that Rachel's "I'm having fun!" thing is vacuuming.

AS: I wonder if they were like, "She's a smart lawyer, how can we make her seem less intimidating?"

AS: Vanessa is just casually walking around my neighborhood in a sweater gown. With a little exposed shoulder. Josephine, on the other hand, speaks to at least four animals in her intro.

KO: We are flying through them! Raven definitely voted for Trump. "We shoot guns and read the Bible," says Raven, summarizing her home.

AS: "Family, faith and football." Also, fighting to take away other people's rights. Corinne gets 10 points for the Legally Blonde reference in her intro, though.

JT: Speaking of Trump, anyone else think Corinne looks familiar?

KO: Liz is drama. She met Nick at Jade and Tanner's wedding, and they ostensibly slept together (though she says "I plead the Fifth" upon being asked by a producer). She's here to start shit, and I'm here for it.

AS: She has a little bit of a Lace vibe. What if she brought a baby and pranked him with it? That's a missed opportunity. "Meet my son, Nick Jr."

AS: Imagine the smell of perfume and anxiety in these limos right now. And tension.

AS: "Two nights a week at 8 p.m. Eastern!" You know, Chris Harrison and Nick have spent so much time together at this point. It's kind of nice.

JT: My friend observed that one of the Danielles looks a lot like Andi.

AS: Does Nick have a type? Or is his type, like, women on TV shows with him?

JT: Women with jobs — sort of.

KO: Like Rachel! Love Rachel! I also love Taylor, whose friends apparently told her that Nick is garbage.

AS: Cue the wacky music!

AS: They all know him! Because they all watch!

KO: It's nothing compared to Hailey's sex joke about not wearing underwear, though.

AS: "Nick is a very sexual man." Help, I shrank into the couch. That joke made me small, and now I am so little.

JT: I didn't hate that joke! It was like Kaitlyn Bristowe's introduction to Chris Soules. Remember when she wiped the glitter off his cheek and was like, "Who's this bitch?"

KO: Liz is here! She is ready to start shit! Look at that sideswept hair!

KO: I love that Chris Harrison won't tell him. He's such a tease.

JT: I hate Vanessa. We get it: You do a language. It's not even impressive, because she's from Montreal. Obviously you speak French. I'd be way more impressed if she spoke the Harry Potter mermaid language.

AS: Nick's reaction to any language other than English is to act like a puppy.

KO: I wanna point out that Jordyn called Alexis' entry right on the money in our predictions post — complete with debate about whether she's in a dolphin or shark costume.

JT: I feel like shark girl uses these stunts to cover up real insecurities though. Like people who always make "ugly" faces in photos.

AS: Maybe the 23-year-old therapist can help her work through it.

KO: "When I first met Nick," says Liz, reminding us she's Emily Thorne back for her revenge.

AS: "It's funny because I've known Nick for so long!"

JT: "That is so classic Nick!"

KO: Rachel — Rachel! — is impressing Nick, though he may not understand what her profession is. (Law. She's a lawyer.)

JT: He doesn't know those words individually or together.

AS: But how does Rachel not know about Nick's siblings? It's his job.

JT: It's his main personality trait. They don't call him Nick "Many Siblings" Viall for nothing.

KO: My only commentary all season will be about how much I love Rachel.

JT: Rachel has great arms. Do you think Rachel's arms got toned from vacuum dancing?

AS: Yes, I think so. Meanwhile, Corinne of the Tokens—

JT: Her name is Tiffany.

AS: —is teasing everyone else about being the first one to kiss Nick. "Do you think you're going to kiss him? I dunno why I'm asking! Just wondering!"

JT: Alexis — Dolphin/Shark Girl — is headed to Bachelor in Paradise, 100%.

AS: Corinne thinks the shark costume is suspicious.

KO: Her name is Tiffany.

JT: Liz came on thinking she had such an advantage, and he just takes her to town. And his points are all so valid!

AS: "I didn't want you to think I was here because you're the bachelor."

JT: "I did have a stereotype," Liz says. That's not what a stereotype is. No one is using stereotype correctly. Liz thought she was gonna waltz her way to hometowns.

AS: The Liz Express just derailed in a major way. Nick is a sensitive man who just wants to settle down and have 82 children. He doesn't need this drama.

AS: Her name is Tiffany.

KO: But it's Rachel who gets the first impression rose! Yay, Rachel! He's taken by her aura and presence!

AS: Yes, they weren't on the same page.

JT: And they confronted each other head-on. Literally.

KO: It's way too hard to guess which of the 30 (!) women are going home, but anyone have some specific predictions?

JT: There are so many who have had no screen time. "I have balls" girl is a goner. And maybe Neil Lane girl.

AS: Drunk Shark Dolphin is a toss-up.

KO: Liz is probably staying, but only for, like, two episodes. Tiffany Trump is staying for longer.

AS: Yeah, she's getting a set-up to be everyone's nemesis.

KO: What're we taking from this premiere? Other than #TeamRachel?

JT: All these girls seem to have actual jobs. More have jobs than other seasons. Fewer chicken enthusiasts than usual.

AS: I think Nick's comfort with being on TV is going to make it a very well-plotted season.

JT: Final rose ceremony, and Tiffany is in! The Trumps have infiltrated the Bachelor mansion!

KO: Dolphin is in!

AS: Shark girl! I hope she wears it the whole season.

KO: One of the red dress girls whose name I cannot remember (apparently it's Brittany) is freaking out.

AS: Liz got one last "we had sex" under the wire.

JT: That means Olivia, Angela, Ida Marie, Lauren and Briana are among the girls going home.

KO: What a premiere! What a two hours! Thanks for joining us! We'll be back with weekly recaps up until the finale, when the three of us will gather together again to liveblog. Until next week, Bachelor Nation!