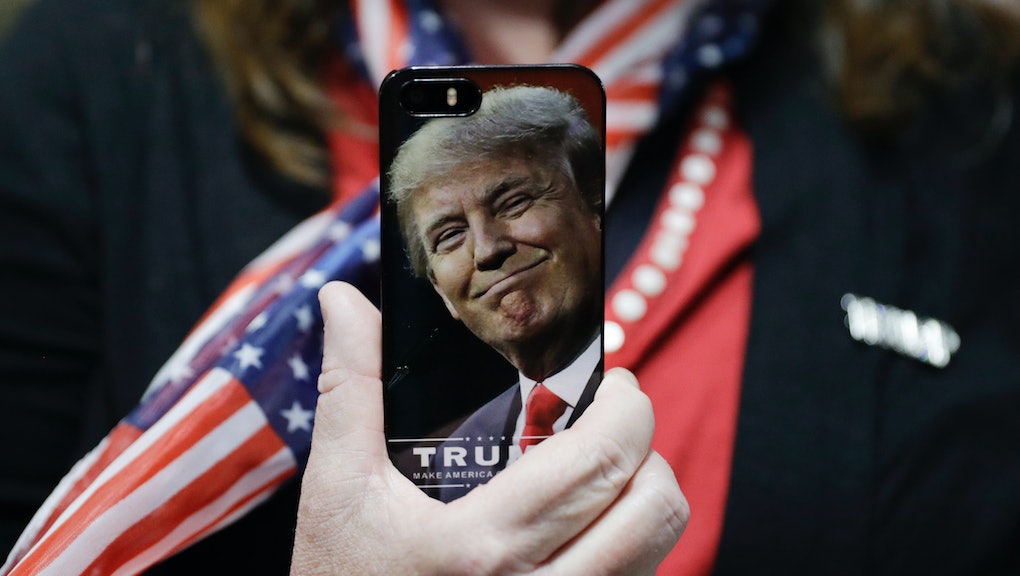 What's wrong with the president-elect's "bold" use of Twitter to make policy announcements? A little thing called factual accuracy.

In tweets Monday night and Tuesday morning, Trump intimated proposals on issues ranging from healthcare, to North Korea, to the now-disputed provenance of the Chevy Cruze.

There's a contrarian case for Trump's Twitter trigger finger, and the president-elect's advocates — including InfoWars' Alex Jones — have suggested that policy proposals via tweet is a positive, allowing the president-elect to get his message to the public without the interfering bias of the media.

But skeptics counter by pointing out that Twitter gives Trump an opportunity to bolster support for his policies without providing details — and without facing scrutiny about the veracity of his claims before tweets are shared widely.

Sure enough, Trump's first official foray into policy announcements via Twitter was rife with misleading lack of context — and outright misstatements of fact.

No, trade with China is not "totally one-sided."

The most misleading claim in Trump's recent chain of tweets is the claim that trade with China is one-sided.

In addition to providing American consumers, particularly lower-income ones, with cheaper goods, trade with China has big upsides for the United States.

U.S. industries — including heavy machinery, medical equipment and automotive manufacturers — all have huge markets in China, which creates jobs. And at least broadly free trade is beneficial for workers: By one estimate, wages at U.S. firms that export are roughly 12% to 18% higher in companies that do not.

If anything, our trade relationship with China is more equitable than those with many other comparable countries, said Peterson Institute for International Economics fellow Gary Hufbauer.

"Among all the large industrial countries [China] has among the lowest barriers," Hufbauer said in an interview, referring to tariffs and other taxes that benefit Chinese workers at the expense of American ones. "Compared to India or Brazil, Chinese barriers are actually quite low. ... It's fair to say that our trade with China has been of enormous benefit to the U.S."

Trump's claim about the Chevy Cruze is misleading: 98% of the cars sold in the U.S. are made in Ohio.

It's true that carmakers and other manufacturers are already changing their policies in anticipation of the Trump administration's proposed deregulation and tax cuts, but Trump's particular Chevy example is misleading.

President-elect Trump claimed in a Tuesday morning tweet that U.S. auto manufacturer General Motors would pay a border tax on the Chevy Cruze, which he alleged was produced in Mexico and sold in the U.S. tax-free.

The company quickly issued a statement countering the claim, noting to CNBC that only 2.4% of Chevy Cruze cars sold in the U.S. are made in Mexico, with the remaining cars assembled in Ohio.

Even if they were completely factual, Trump's highly public attacks on American companies already appears to be affecting the stock market, and even prompted allegations that they open the door to insider trading, according to one Fortune report.

Other economists, including Center for Economic and Policy Research co-director Dean Baker, share this concern as well.

One of the main reasons Joe and Jane types have so much trouble making money investing in individual stocks is the fact that they're effectively competing against powerful hedge fund managers and other professionals who have better access to information.

Trump's tweets aimed at specific companies are already making the problem worse, and empowering Wall Street at the expense of main street — even those lucky enough to have avoided having Trump targets in their retirement portfolios.

According to Fortune, hedge funds have already begun assembling lists of companies vulnerable to Trump Twitter tirades, and making trades before everyday Americans know that the company in question is going to be singled out for criticism.

Trump is cherry-picking his Obamacare data.

Trump's somewhat more accurate tweets were related to Obamacare, when the president-elect pointed out that premiums have risen by as much as 116% in Arizona.

But even the above tweet cherry-picks data, and doesn't acknowledge the cost-lowering upsides of the healthcare law.

While it's true Arizona residents have borne the greatest cost hikes, the 116% figure doesn't account for the fact that the majority of people who purchased healthcare under the law receive generous subsidies. His assertion also ignores the many places where premiums have held steady or even fallen.

It's certainly true that premiums are going up under the Affordable Care Act, but only because the law specifically targets the poor, the sick and the elderly who previously had the most trouble purchasing insurance — that inevitably bumps costs broadly.

But research suggest costs might actually have risen even more had the law not been passed in the first place. One study found that repealing the ACA could increase average out-of-pocket costs in the individual marketplace by as much as $1,500 annually by 2018.

To be fair, anybody would have trouble fitting all that into 140 characters.

A spokesperson for the Trump transition team didn't immediately respond to a request for comment.