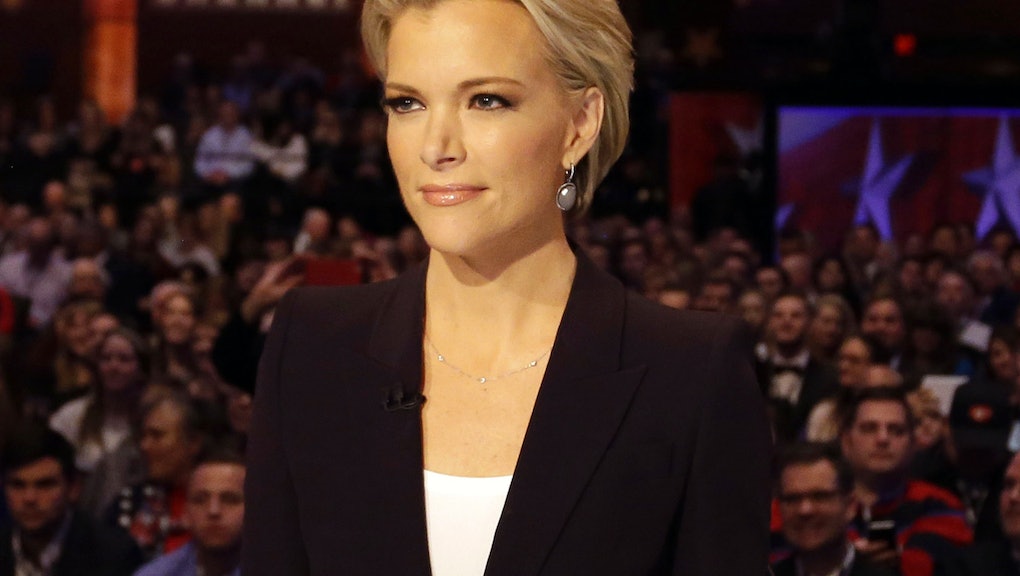 News of Megyn Kelly's intended departure from Fox News for NBC sparked mixed reactions on Tuesday from those who had likely already been unsure of how to cast Kelly's legacy there. Was she a feminist trailblazer who had outgrown an organization with a reputation for blatant sexism — or was she no different from her colleagues, whose own racism and problematics had become synonymous with Fox News?

For some, it became especially difficult to answer this question once Kelly became another one of Donald Trump's targets, enduring sexist insults from the then-candidate and his campaign surrogates. Kelly looked more sympathetic still when she called out Sean Hannity for babying Trump, and former Fox News CEO Roger Ailes for alleged sexual harassment. Picking up on what seemed like a growing feminist consciousness, outlets like Vanity Fair dubbed her a "newly minted role model for women."

But it doesn't require too much digging to unearth evidence to the contrary. A brief history:

Kelly's staunch insistence that Santa Claus and Jesus are both white is perhaps one of the most memorable examples of the anchor's casual racism.

"Just because it makes you feel uncomfortable doesn't mean it has to change," Kelly said in December 2013, responding to a Slate opinion piece on why Santa should no longer be depicted as white.

"Jesus was a white man too," she said. "He was a historical figure, that's a verifiable fact — as is Santa, I just want the kids watching to know that."

Kelly worried that it would be confusing for children to revise the story in the "middle of the legacy."

According to a Media Matters transcript, Kelly kicked off an interview with National Urban League president Marc Morial by asking him, "What is the evidence that what happened to Eric Garner and what happened to Michael Brown has anything to do with race?"

The anchor continued to press Morial for "evidence" and "proof." After interrupting Morial twice, Kelly stated, "To say that this is a racist situation as Al Sharpton has suggested, as Mayor de Blasio has suggested, as many others have suggested, requires evidence."

When Morial asks Kelly what it would take for her to acknowledge that the killing of unarmed black men by white police officers has to do with race, she repeated again, "I'd like to know the proof."

In June 2015, a white police officer in McKinney, Texas, slammed a black 15-year-old girl wearing a bathing suit to the ground apparently for disobeying police orders to leave a pool party. While the story largely sparked outrage, Kelly suggested that the teen's behavior had warranted what appeared to many as excessive force.

"He had told her to leave, and she continued to linger," Kelly said on her show. "When the cop tells you to leave, get out."

Though she insisted she wasn't defending the officer's actions, she said, "The girl is no saint either."

Kelly said black communities are plagued by a "thug mentality"

In a September 2015 panel discussion, Kelly tried to diagnose the problem of violence and poverty in black communities, saying that a "them versus us," "anti-cop" culture is partly to blame.

"People have called it the 'thug mentality,' and that's a controversial term," she said. "But that it's cool to sort of hate the cops, and hang out — and be somebody who doesn't necessarily prize being there for your family, and so on. And how do you reverse that?"

Following the death of Sandra Bland in July 2015, Kelly suggested that Bland could have done something to prevent her arrest.

An officer in Waller County, Texas, pulled Bland over for not signaling before changing lanes. After being violently arrested, Bland was found dead in her jail cell three days later in an apparent suicide that was later investigated as murder.

"Even if you know the cop is in the wrong, comply and complain later," Kelly later said while interviewing Milwaukee County Sheriff David Clarke on her show.

At her best, Kelly is an example of the conservative, corporate feminism figures — like Ivanka Trump — who have made a name peddling to upper class white women. At her worst, Kelly found herself comfortably situated among her peers at Fox News.

Which Kelly will NBC get?