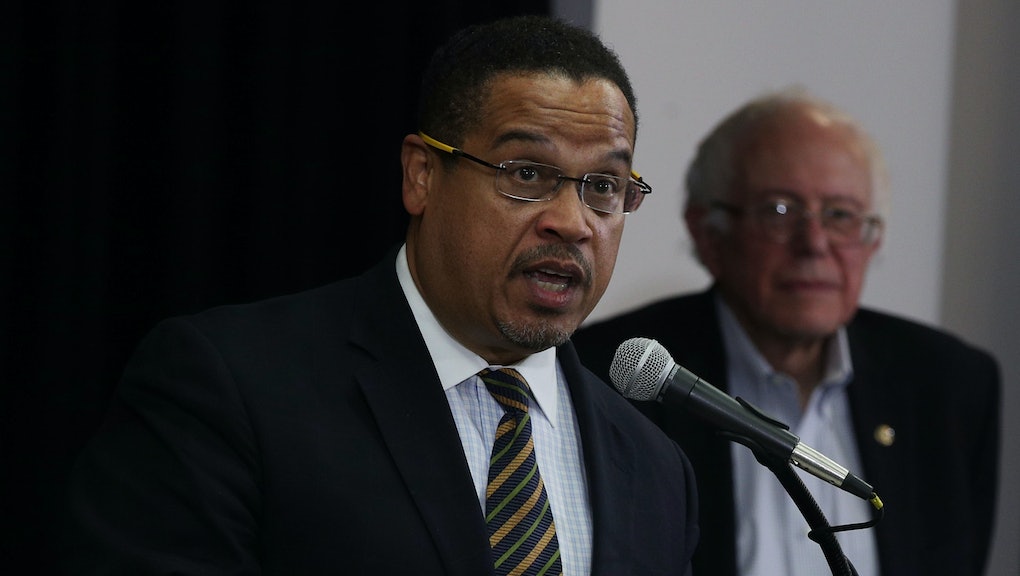 Who is Keith Ellison? Meet the Muslim American who Bernie Sanders wants as DNC chair

For all the controversies that engulfed the Democratic Party in 2016, perhaps the biggest was the leadership of the Democratic National Committee. The chairwoman, Florida Congresswoman Debbie Wasserman-Schultz, was forced to resign just days before the party’s nominating convention in July. This came after hacked e-mails revealed that she was working behind the scenes to help Hillary Clinton beat Bernie Sanders in the Democratic primaries.

While Donna Brazille — another Clinton loyalist — took over for the remainder of the election, the race is now on to permanently lead the national party as it seeks to take back Congress and resist the agenda of President-elect Donald Trump.

Two main candidates have emerged. One is Tom Perez, an Obama-administration insider and currently the Secretary of Labor, who was thought to be on the short list for Clinton’s vice presidential running mate.

The other candidate, Minnesota Rep. Keith Ellison, has less of a national profile. Here’s what you need to know about the man who hopes to lead the Democratic party through Trump’s four-year term.

Ellison was the first Muslim elected to Congress

When Ellison earned his seat in 2006, he became the first Muslim American to serve in the U.S. Congress. Ellison converted to Islam while he was in college.

He’s been controversial since he set foot on Capitol Hill

Ellison chose to be sworn in to his seat in Congress on a copy of the Quran — Thomas Jefferson’s copy, actually — which upset many conservative commentators and politicians, namely columnist Dennis Prager, who wrote that he should not be allowed to do so.

He’s a favorite of Bernie Sanders

Sanders, who spent much of his campaign railing against the “establishment” of the Democratic Party, thinks that Ellison should be the man to fix it, issuing the following statement:

We must also do everything we can to elect Democrats in Congress in 2018, and to take back the White House in 2020. We need a Democratic National Committee led by a progressive who understands the dire need to listen to working families, not the political establishment or the billionaire class. That is why I support Keith Ellison to be the next Chair of the Democratic National Committee, and why I hope you'll join me in advocating for him to lead the DNC.

Sanders is circulating a petition of support for Ellison.

He’s seen controversy over past associations

Ellison has come under scrutiny in the past for writings praising the Nation of Islam, a Muslim group whose leader, Louis Farrakhan, is widely seen as an anti-Semite. He also made controversial statements about Israel and Zionism, reports CNN.

He’s a champion of left-wing causes

There’s a reason Sanders likes Ellison so much. Ellison is a strong supporter of tougher bank regulations, putting him in the company of Sanders and other progressive Democrats like Elizabeth Warren.

He wants to change the way the DNC raises money

Ellison told the Huffington Post on Wednesday that he wants to end DNC acceptance of lobbyist money, another move likely to boost his profile with progressive party members.