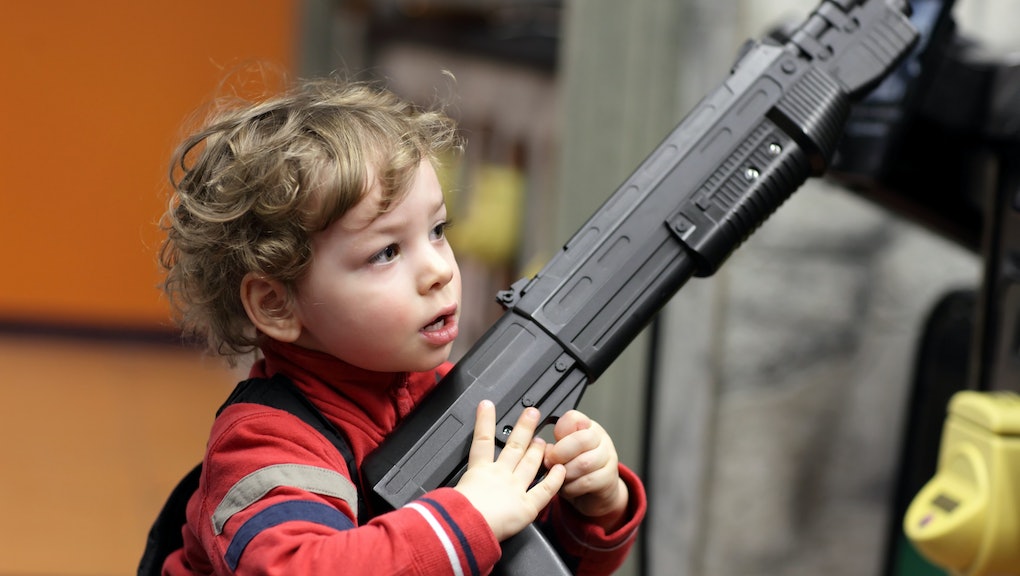 That's the bold — if satirical — message of the Brady Campaign to Prevent Gun Violence, which published a video in October warning Americans of the dangers of toddlers.

Toddlers have shot about one person a week for the past two years and by May, toddlers were behind more U.S. shootings in 2016 than Muslim terrorists were.

The problem speaks to the ubiquity and normalcy of guns in the U.S. and childrens' access to loaded guns, shooting — sometimes fatally — either themselves or others.

Guns can be found in one in three homes with children — around 1.7 million of those children have easy access to loaded guns, which owners failed to lock away.

"America's got a real problem," the Brady Campaign video declares, followed by parody. "We need to lock them up. Not the guns — that's just un-American. The toddlers. Round them up. Deport them. Get them out of our country. And keep them away from our guns."

As part of this lobby to promote gun safety laws, the Brady Campaign created ToddlersKill.org, a site which catalogues the epidemic of toddler-led gun violence. "This PSA is satire," Brady Campaign president Dan Gross told the Washington Post.

"But the public health crisis it calls attention to is anything but. Whether the trigger is pulled by a toddler, a convicted felon, domestic abuser, or terrorist, we have a problem in America with guns too easily falling into the wrong hands. And that translates to hundreds of lives lost or changed forever every single day."

America has an estimated 265 million privately-owned guns and has a dedicated population of Second Amendment supporters.

The NRA is the exemplar of such dedication, tirelessly lobbying for fewer gun laws and regulation. The group has been part of a larger intitiative encouraging Congress to prohibit research into gun violence by the Centers for Disease Control and Prevention.

The power of NRA lobbying leaves many on Capitol Hill circumspect in their ability to challenge the organizationan.

"The National Rifle Association outspent supporters of new gun controls [expanding background checks] by hundreds of thousands of dollars as the Senate considered and ultimately rejected legislation," the Hill reported in April 2013.