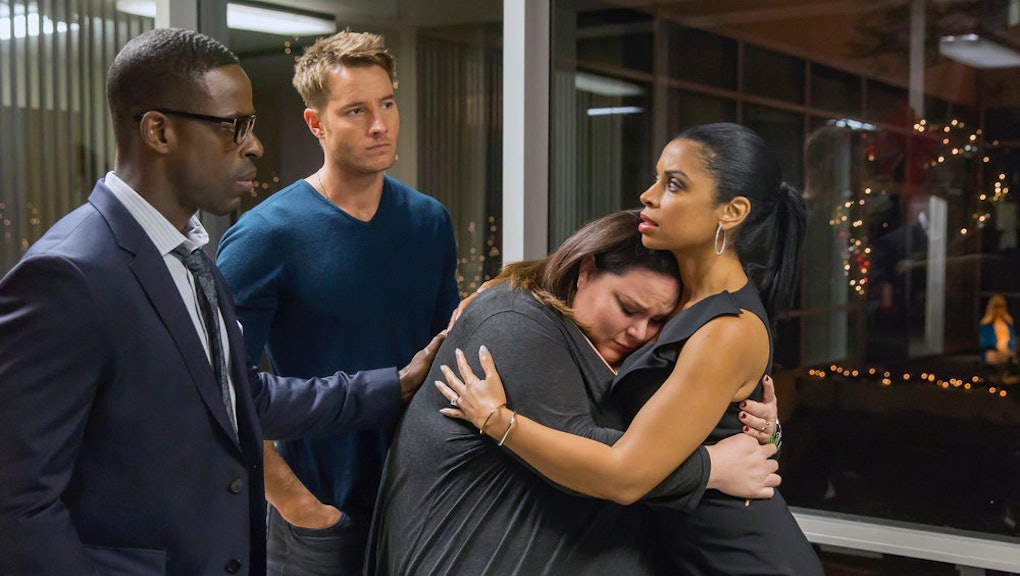 'This Is Us' isn't a cry-worthy guilty pleasure. It's so much more than that.

It took me forever to get caught up on This Is Us. I was turned off by all the suggestions that it was a show built to make you cry at any manipulative cost. Frankly, I was doing enough crying last fall as-is. I had watched Parenthood when it was on NBC; I understood what I would be getting myself into to watch this new series. So despite rave reviews, I stayed away.

Then, ahead of the holiday break, NBC sent members of the Televison Critics Association a set of screeners of the entire first half of the season. On a whim — and my mother's recommendation — I started watching. What I found was not a guilty pleasure, nor a series that relied on emotional manipulation for audience response. Instead, I watched 10 episodes filled with heart and honesty that grew greater from a qualitative perspective every episode.

This Is Us needs no qualifiers for its success; it's not just good for its genre, nor should it be resigned to being comfort food TV. It is simply one of the best new shows of the season.

(Editor's note: Though we'll avoid sigificant story spoilers in this mid-season review, we will be spoiling the big twist at the end of the pilot. Reader discretion is advised.)

This Is Us starts on its worst foot: a Wikipedia citation. “This is a fact: According to Wikipedia, the average human being shares his or her birthday with over 18 million other human beings,” the show's opening title card reads. “There is no evidence that sharing the same birthday creates any type of behavioral link between those people. If there is... Wikipedia hasn’t discovered it for us yet.”

The card is dumb, and a distraction. Theoretically, it's there to set up that four separate people — Los Angeles-based brother and sister Kevin and Kate (Justin Hartley and Chrissy Metz), New York family man Randall (Sterling K. Brown) and Pittsburghian Jack (Milo Ventimiglia) — are all celebrating their birthday on the same day. But, surprise! Jack's wife Rebecca (Mandy Moore) goes into labor and births three triplets. Sadly, one dies during childbirth, but in a stroke of fate, they adopt another child that's been left at the hospital. That child, unlike Jack and Rebecca, is black.

You got it yet? The big twist in This Is Us is that Jack and Rebecca live in the 1970s; their children are Kate, Kevin and Randall, who live in the present day. As a story development, it's effective, but it's kind of corny as a twist. Modern Family did virtually the same thing in its pilot; "everyone is related" just isn't a head-turner in the way creators think it is.

Color me shocked, then, that every episode of This Is Us since has been a drastic and dramatic improvement. The best of them use the bifurcated storytelling to great effect, like when the young Jack visits Randall in a hallucination, or when Mandy Moore shows up (in full age makeup) in the present day.

The writing is naturalistic and the craft of the series smart, but what really works about This Is Us is the cast. Brown is the anchor, delivering a The People vs. O.J. Simpson-caliber performance in a sweet family drama that elevates the whole thing. His Randall is torn between aching for his past — seeking out his birth father — and accepting his present. His story is, in many ways, the series' thesis.

Brown represents something of a wall of acting that the other performers run into, some more stylishly than others. Susan Kelechi Watson and Ron Cephas-Jones, who play Randall's wife and birth father, are particularly great scene partners, while Mandy Moore does some surprisingly good work with Brown. (Hartley and Ventimiglia are less worthy matches, unfortunately.)

The episodes where the family is all together are the most compelling — which was somewhat handicapped by Metz, who plays Kate, not appearing on-screen with any family member besides Hartley's Kevin until episode nine. That makes the earliest episodes of the series the weakest. But generally, the more family members in the same scene interacting with each other — be they the younger or older variants of those characters — the better.

I confess, I didn't cry once while watching the series — maybe teared up here and there, but no major streams of tears. I didn't feel cajoled into any significant emotional response. What I did feel, however, was satisfaction. These are compelling stories (some moreso than others; the Kate story so far has been disappointingly singular in its focus on her weight) handled with a light hand. It's the definition of lovely TV.

It is not light, however, either in quality or in tone. To relegate it to some bin of lower caliber because of its genre is to greatly underestimate it. This Is Us is smart, lived-in TV. Few shows on TV are as capable of balancing tone, character and story as expertly as it does right now. It may make you cry, or it may leave your eyes as dry as it did mine. But you'll almost certainly watch it feeling something natural and real.

This Is Us returns Tuesday night at 10 p.m. Eastern on NBC. Follow the main This Is Us hub here.