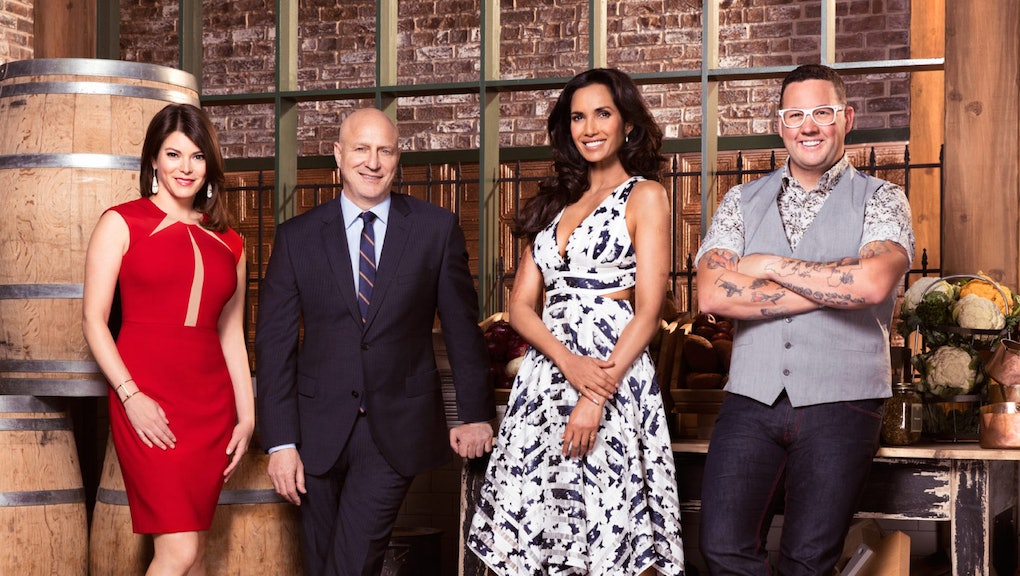 'Top Chef: Charleston' is the best 'Top Chef' has been in years

In the opening of Top Chef's most recent episode, the 12 remaining chefs shuffle into their workspace as usual — only to find it dark and empty. There's no host Padma Lakshmi waiting to deliver instructions for their Quickfire Challenge, nor is there a guest judge. The contestants are befuddled.

Then we see Lakshmi and guest judge John Currence sitting in the Top Chef control room, watching the chefs on cameras. Lakshmi is particularly delighted to see what her charges are like when she's not around. After leaving them in the literal and proverbial dark for a while, the producers start the challenge clock and open a door in the kitchen. Behind the door are a set of ingredients. Suddenly, chef Sylva Senat groans. "Biscuits," he says.

The chefs remain perplexed for a second — the competitors seem aghast at the idea of them deciding their own challenge — but then scramble to complete the challenge.

It's the kind of slight but entertaining change to a beloved format that is making Top Chef's 14th season, set in Charleston, South Carolina, incredibly watchable TV. With an all-stars versus newbies format that birthed a stellar cast, Top Chef: Charleston is shaping up to be a revival for Bravo's flagship reality competition series. Put simply: This is the best Top Chef has been in years.

Top Chef has aired one full all-stars season back in 2010: season eight, which saw Top Chef: Chicago's Richard Blais beat out Top Chef: D.C.'s Mike Isabella in a tight finale. That season was remarkable, both for its strength of cast and what smart, creative challenges the show producers put the chefs through.

Unfortunately, the season triggered something of a downturn for Top Chef. After hitting its peak, the series hit its nadir with Top Chef: Texas, which might've better been called Top Chef: Road Trip to Wherever in Texas Will Take Us at the Moment. The shifting locations — Austin! San Antonio! Dallas! Somewhere in the middle! — prevented Top Chef from really representing the culture of a single location in the way previous seasons (especially Las Vegas and Chicago) did. It also mostly threw away the one-winner-a-challenge format the show used previously, favoring team wins; as a result, that season's winner, Paul Qui, won an unprecedented eight elimination challenges, a record you can't fairly compare to other seasons because of the different criteria.

That season also introduced the well-produced but ultimately frustrating web series Last Chance Kitchen, which gave eliminated chefs the chance to compete to re-enter the main series. Top Chef: Texas' was a bit of a bust, with the winner, Beverly Kim, getting eliminated just one episode after her return.

But the next season, Top Chef: Seattle, got gimmicky, emphasizing the importance of Last Chance Kitchen at nearly every turn. That season's winner, Kristen Kish, was eliminated in the season's 11th episode, paving the way for strong competitor Brooke Williamson to run the boards. Kish won Last Chance Kitchen, came back in, and beat Williamson in an Iron Chef America-esque format which seemed almost designed to lead Kish to a win.

Top Chef fumbled through the next few seasons and locales — New Orleans, Boston, another damn road trip season through California — constantly adjusting and tweaking the format. In season 11, producers made a bizarre choice to bring all the chefs into judges' table as opposed to just those up for the win or elimination. Season 13 focused on the importance of social media in ways that never felt organic. But it wasn't until the show made it to Charleston — with another pseudo all-stars cast in tow — that it finally trimmed the fat.

Last Chance Kitchen is still there, but it's not constantly referenced. The judges still bring everyone in for judges' table, but the actual judging is much more streamlined. Gone are the giant group wins; even on team challenges, wins are awarded to individual chefs. Finally, years after season eight, Top Chef has managed to keep what works and undo its sins.

However, if it were just fixing what didn't work Top Chef: Charleston would merely be decent. Instead, the season boasts challenges which are deeply rooted in the city's culture and other food traditions. In one, the contestants ate at the homes of local chefs and made meals inspired by what they ate. In others, they barbecued overnight and cooked for a riff on the feast of the seven fishes.

The cast is tackling these challenges with aplomb. Casey Thompson returns for a third run (she was also in season eight) more focused than she was as an all-star. Amanda Baumgarten, a bit of an also-ran in season seven, has been refreshingly quirky and game this time around. Sylva Senat is making a good case for being the best of the rookies. Plus, you've got villains like shit-stirrer Katsuji Tanabe and reluctant rookie Emily Hahn.

Most compellingly of all, you have Brooke Williamson, returning from Top Chef: Seattle for a fair shot at the win, with no beloved Last Chance Kitchen winner to come stop her. Williamson has won two Quickfires and an elimination challenge out of the four of each so far. Watching her dominate and march toward the victory she saw escape her grasp is thrilling TV.

Top Chef: Charleston is not a perfect season by any means. Even though producers have fixed up the format, there are some elements (table-side feedback for chefs) that still feel unwelcome. The premiere saw the final challenge take place at a former slave plantation — only for white contestant John Tesar to send home black chef Gerald Sombright. The optics were hardly ideal, to say the least.

All that said, more is working than not. After almost six years, Top Chef is must-see TV again. With Food Network series off Netflix in 2017, those jonesing for great food TV need only turn their dials to Bravo. These chefs are serving up quality entertainment.

Top Chef: Charleston airs its sixth episode of the season Thursday at 9 p.m. Eastern on Bravo.