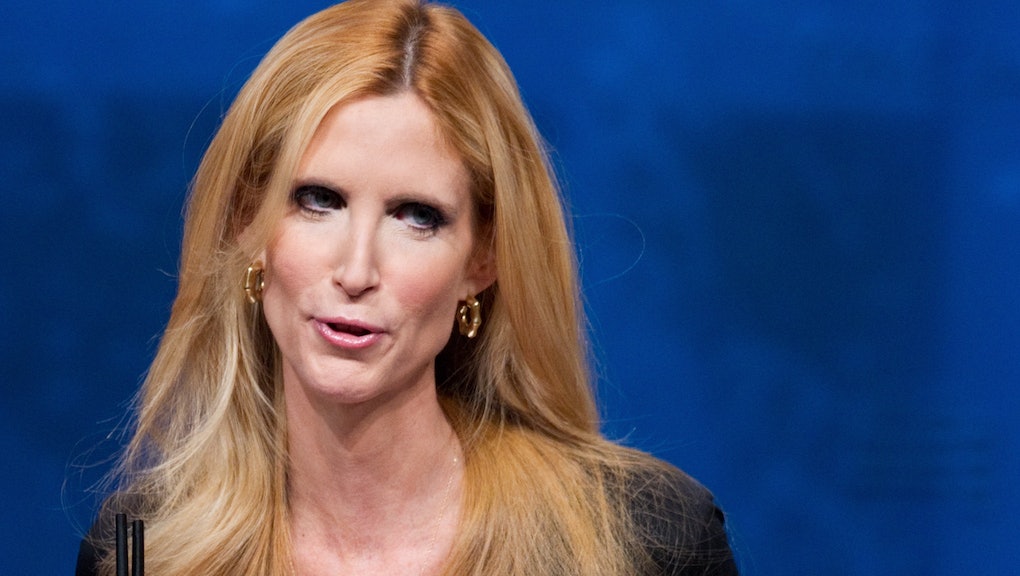 The tweet was simple: "14!" — the number of full days President Barack Obama is still in office. But the number is also a white supremacist symbol: "14" refers to the "14 words," which the Anti-Defamation League calls the "most popular white supremacist slogan in the world." The words are, "We must secure the existence of our people and a future for white children."

Coulter's fans responded almost unanimously with "88!" — code for "HH," or "Heil Hitler." Answering a "14" with an "88" is a common call-and-response chant for white supremacists (or, as the racist, Trump-cheering, far-right zealots on the internet call themselves now, the "alt-right").

In an email, Coulter told Mic, "I have tweeted the number of days Obama has left in office at least 50 times. anyone who hasn't figured that out by now is retarded." (Her last "countdown" tweet appears to be from Dec. 7.)

Coulter knows exactly what the "alt-right" is: As recently as December 2015, she called it a "'white power' movement" in an email to BuzzFeed. But she dismissed the idea that the group's racism would be a cultural force: "That says nothing about me or Donald Trump."

Her claim barely holds water now. Coulter, who wrote a book in support of Trump's anti-immigration policy, has made a name for herself over the past two decades by stoking the same anti-black, anti-Muslim and anti-Jewish fears that propelled today's white nationalist movement. Openly racist influencers like Richard Spencer and Milo Yiannopoulos, who often set the bilious agenda for an army of trolls on Twitter, have Coulter, in part, to thank for their support.

In fact, in August 2015, just months before clarifying her stance to BuzzFeed, she seemed to play directly to the so-called movement:

The line "We must secure the existence of our people" incites the same fears of immigrants and diversity as Coulter's published brand of nationalism. "As America diversifies ... we pick up a lot more corruption," she wrote in In Trump We Trust: E Pluribus Awesome! "Almost any immigrant to America makes it less honest."

So Coulter ostensibly didn't mean to tweet support for this particular brand of white nationalism. Whether or not she'll admit it, however, she continues to help take the movement mainstream.