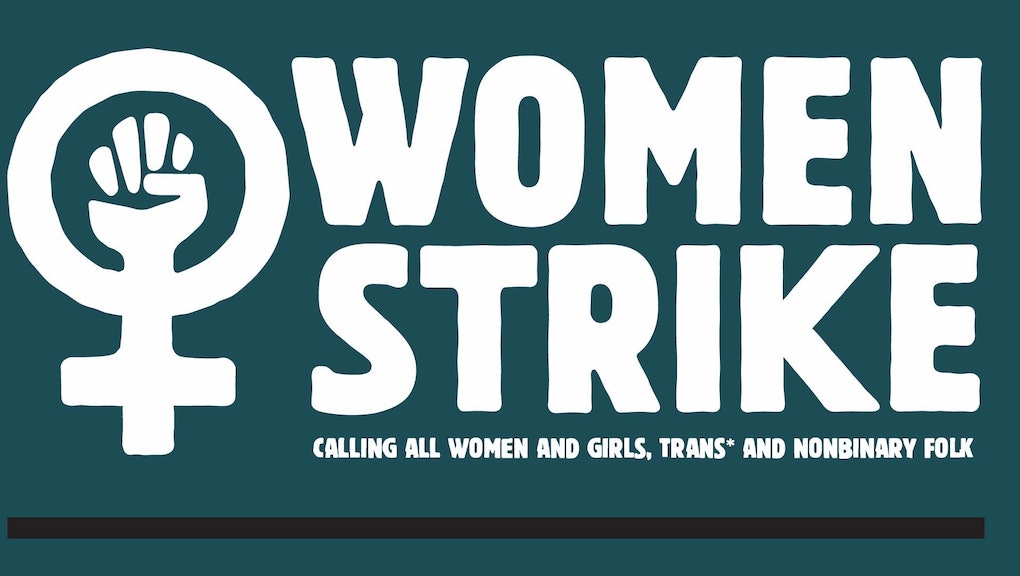 Where the United States government fails to support its people, women pick up the slack. Where many countries have nationalized child care, American women can find themselves impoverished by those costs. Where other countries have minimum wage provisions, American women take on low-paying jobs men feel are beneath them.

And so, on the weekend of Donald Trump's inauguration American women are going on strike. On Jan. 20 and 21, women will abstain from not just work, but domestic labor, in order to demonstrate the political power of women to shut down not just the workplace, but the home as well.

As Trump's election has ignited a fire of activist energy, strike organizers want the inauguration to be the beginning of a women's liberation movement that will resist patriarchal politics for years to come.

The strike doesn't just support walking out from your job and preventing economic exploitation, but also disrupting unpaid emotional and domestic labor that women are expected to perform as default societal function.

"Some women talk about housework and cleaning, but the span of work is vast," strike organizer Erin Mahoney said in an interview. "It goes from women striking from fake smiles, to emotional work in their relationships and communities — making everything flow invisibly, making sure sure everyone's feeling OK and boosting male egos."

The group behind the strike is National Women's Liberation, a women's rights group founded largely by activists from the 1960s. Since Trump's election, NWL has seen a massive turnout of potential new members. Their first meeting in New York City post-Trump had so many attendees that hundreds of them went to a nearby park to for a speakout.

There have been several recent successful women's strikes in Europe. In Poland, thousands of women took to the streets for the Black Monday protest for abortion rights, and eventually helping to stop a potential abortion ban in its tracks. In 1975, a full 90% of the women in Iceland held a strike, and now the country's women strike on Oct. 24 to protest the national pay gap.

Trump poses a direct threat to women's rights, but he isn't the only one standing in the way of the progress. The strike's organizers admit that the Democrats are better than Trump on women's issues, sure, but "better" isn't good enough when it can't win electoral power and protect women's rights.

"The Democrats have had years to put in place programs that would help and advance women's interests," Mahoney said. "It would have led to more women and working people in general voting, and we wouldn't have this situation in our hands."

The organizers have a clear agenda and list of political demands, including a $15 minimum wage, unrestricted access to birth control and not just the nationalization of health care, but free child care as well.

But a single protest or strike isn't going to win these gains for women's rights movements. Candi Churchill, an organizer for NWL in Florida, said that Inauguration Day should be the start of a process toward restoring coalitions and organizations that can force serious electoral change, building support for a movement that can sustain itself throughout Trump's presidency and beyond.

"We have to reignite a serious, militant women's liberation movement again, with positive demands," Churchill said in an interview. "I don't want to be defensive for the next four years. I want to talk about paid leave and putting an end to racial and sexual assault. And to do that, we have to recognize our collective power."