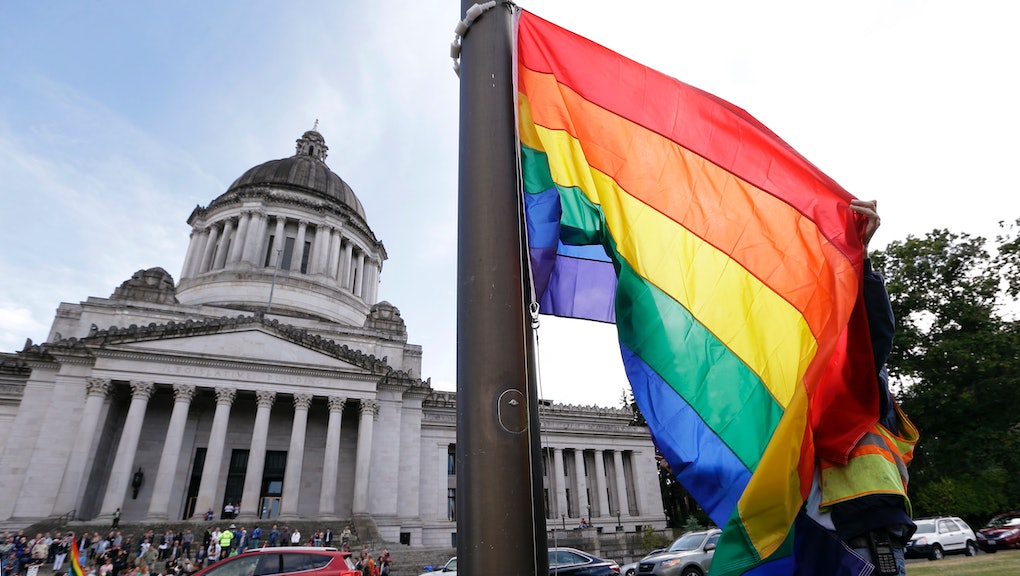 One Colorado hospital worker is not ready to work where the pride flag is NSFW.

Michelle Hurn, a registered dietitian at Boulder Community Health for a year and a half, told local television station KMGH that her employer asked her to remove her pride flag screen saver after a co-worker complained. Hurn, an out lesbian, said her employer said if she did not delete the image, she would be fired.

"I'm certainly not looking for special treatment or preferential treatment, but to say that a symbol of equality is offensive — I have a real problem with that," Hurn told KMGH. "I just don't feel good working for an organization that's going to stand behind that."

According to the Daily Camera, Hurn has given her two weeks notice and Monday will be her last day.

Hurn said hospital administrators were not supportive of her display of the flag.

"I was very surprised that HR, my boss, the director of our department, they all told me they like me, they think I'm a good dietitian, they think I do great work, but if I'm going to put the symbol back up, then they're going to start the discipline process and that I was going to be fired," Hurn told KMGH.

In a statement to KMGH, Rob Visser, president and CEO of Boulder Community Health, said Boulder Community Health "unequivocally supports" all employees' rights to a safe and welcoming workplace. Visser also said Hurn was never threatened with termination and that Hurn turned down the chance to have a formal or informal mediation with her co-worker and chose to resign instead.

Visser also said it is BCH policy that "communications and images in shared workspaces be neutral" to focus on patient care.

"In this specific situation, the employee resigned rather than accept our content neutrality practice," he wrote. "I am deeply saddened that this incident has caused members of our community to feel unwelcome at BCH. This is not who we are and does not represent our values."

Hurn said she hopes her story empowers other people.

"If you are white or you are straight, you might not get the magnitude of telling someone they can't have a part of themselves up," she told the Daily Camera. "But it's a step in the wrong direction, a step toward treating them like second-class citizens. It was a much bigger deal than just a small screen saver."