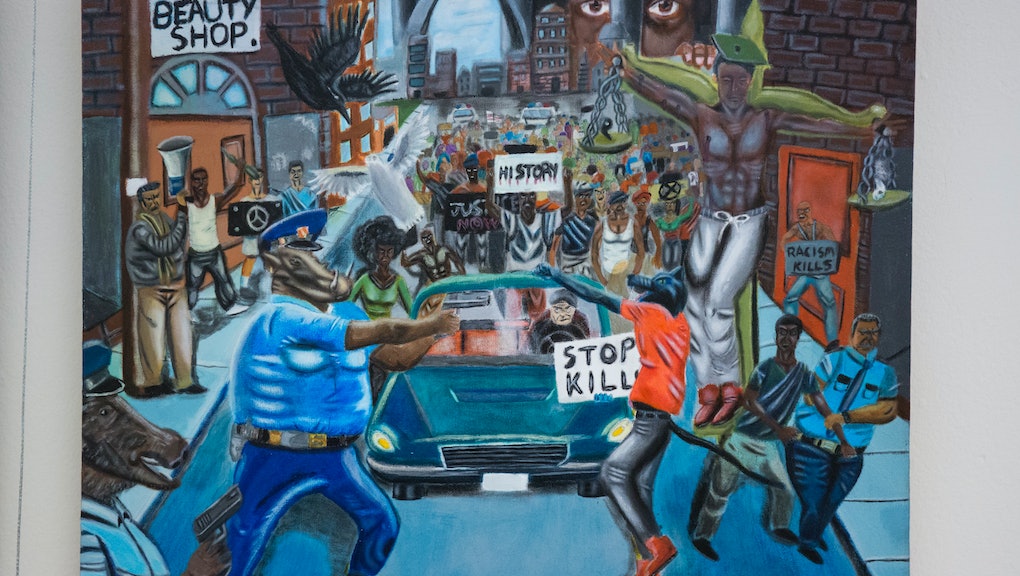 A Republican congressman from California stole the prize-winning work of art from a congressional art competition on Friday night, saying it was disrespectful to police.

Rep. Duncan Hunter's office says Duncan's removal of the art from a student competition, titled "Untitled #1" and depicting police officers arresting protesters as various animals including a boar, earned him accolades from law enforcement agencies, the Peace Officers Research Association of California and the Fraternal Order of Police, according to the San Diego Union-Tribune.

Hunter delivered the piece of artwork to the office of Rep. William Lacy Clay Jr., an African-American Democrat from Missouri who sponsored the competition. Clay's district includes Ferguson, the small city in St. Louis County, Missouri, where massive demonstrations and clashes with police broke out in 2014 over the police killing of 18-year-old black man Michael Brown.

According to the Union-Tribune, the painting has hung for months in a tunnel connecting the U.S. Capitol to House office complexes. It only became noteworthy after right-wing site Independent Journal Review reported on its presence several weeks ago. After the report, police associations and conservative commentators like Fox News' Eric Bolling began aggressively demanding its removal.

In a press release, the Union-Tribune reported, Clay's office had called the painting "a colorful landscape of symbolic characters representing social injustice, the tragic events in Ferguson, Missouri, and the lingering elements of inequality in modern American society."

"The U.S. Capitol is a symbol of freedom, not censorship," Clay said, according to KNTV. "The young artist chose his own subject and the painting will not be removed." In an email sent to the Congressional Black Caucus, Politico reported, Clay's chief of staff, Yvette Cravins, said Clay "will not tolerate the removal of a painting from the First Congressional District of Missouri's art contest due to a Member's personal objections."

Hunter is no stranger to exaggerated controversy. In recent years, Hunter as drawn attention for vaping during sessions of Congress as well as racking up over $1,300 in misallocated funds spent on video games.