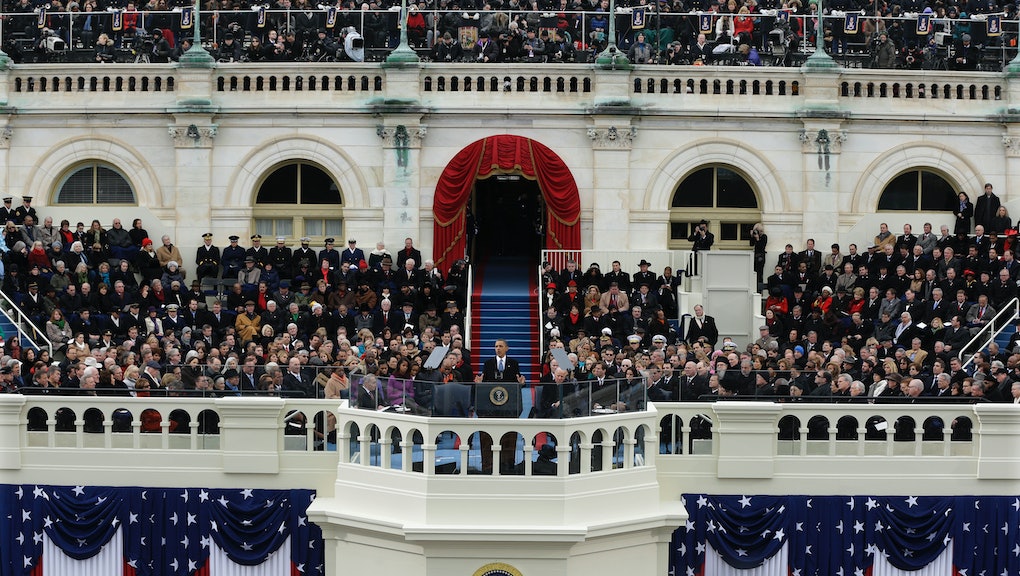 President-elect Donald Trump will assume the presidency on Jan. 20 — and while many American taxpayers aren't happy about Trump's inauguration, they'll be the ones footing much of the bill.

Trump's inauguration, the Washington Post reports, will cost anywhere from $175 to $200 million. The cost, which is just slightly more than the price of past inaugurations, includes not only the swearing-in ceremony, but the security and festivities surrounding the inauguration as well, including the inaugural ball, parade, official dinners and parties for Trump's donors and supporters.

Here's how that cost breaks down — and where taxpayers can expect their money to go.

Trump's inauguration committee is hoping to raise $65 to $75 million in private funds for the inauguration, the New York Times reports, a number that would surpass the record $53 million President Barack Obama raised for his 2009 inauguration.

The private funding, the Post notes, would cover the more "glamorous" parties and celebrations during the inauguration festivities. A document detailing the benefits for donors, published by the Times, outlines such inauguration festivities as a "ladies luncheon" with women in the first families, a candlelight dinner, victory reception and "intimate policy discussion" and dinner with Trump's cabinet picks.

Trump's inauguration committee, however, notes that the president-elect isn't looking to have an elaborate celebration.

"The president-elect wants this to be simple. He wants this to be about the people," inaugural committee leader Thomas Barrack Jr. told the Times. "It's not about putting on the most expensive talent and spending that kind of money to ingratiate himself."

Trump's relaxed rules for corporate donations, however, only adds to the growing concern over the president-elect's business conflicts, as corporations can seek to curry favor with Trump through a sizable donation.

"You can't have a more ideal opportunity to buy influence and ingratiate yourself with a new administration than by giving a huge contribution to pay for their inauguration," campaign finance reform advocate Fred Wertheimer told the Times.

Any private money that is raised, but not spent, on the inauguration, inaugural committee communications director Boris Epshteyn reports, will be donated to charity.

The rest of the inaugural funds, however, will come from the taxpayers — including, namely, the money for the swearing-in ceremony itself.

The ceremony, the Post notes, is expected to cost roughly $1 million, which includes the outdoor ceremony, the construction of the stage at the U.S. Capitol Building and the congressional luncheon for Trump and Vice President-elect Mike Pence.

Though the inaugural committee predicts 2 to 3 million Americans will attend the inauguration — a number that would be far above the record 1.8 million who turned out for Obama's first inauguration — security officials are currently projecting an attendance of 800,000 to 900,000.

Primarily, however, the federal funds will be used on security for the event, which security officials predict will be more challenging than in past inaugurations. In addition to terrorist concerns, the Times notes, security officials are also preparing for an influx of protesters at the inauguration and the possibility of clashes between Trump detractors and supporters.

"I can't think of an inauguration that presented more security challenges than this one," former Secretary of Homeland Security Michael Chertoff told the Times.

Security costs for the inauguration, the Times notes, are expected to run over $100 million, a number that, though high, would be in line with the $115 million spent on security in 2005 and $124 million in 2009. In addition to the special security measures for the inauguration festivities, the security cost, the Post explains, also includes the salaries for local police and emergency officials and federal workers who have Inauguration Day off.

Though Inauguration Day will be costly, it will also be a boon for the local economy. The inauguration will cost Washington, D.C. roughly $30 million — most of which will be reimbursed by the federal government — but the city is likely to earn several hundred million dollars in revenue through money spent on restaurants, limos, caterers, hotels and more, the Post reports.