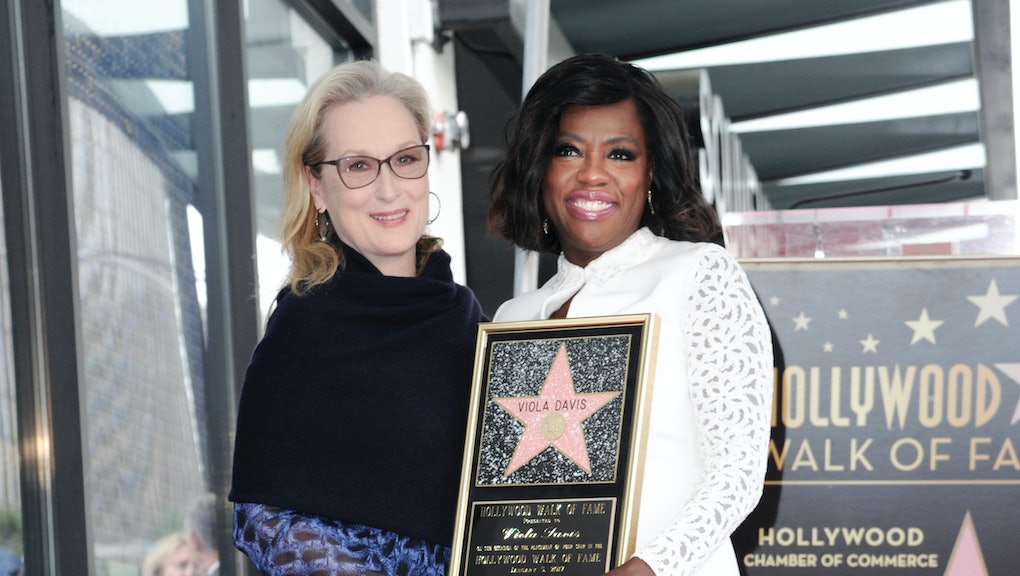 There are few Hollywood friendships as authentic and as iconic as Meryl Streep and Viola Davis'.

On Sunday night, Davis presented Streep with the Cecil B. DeMille award at the Golden Globes, honoring Streep's legendary career. Before the clip reel ran that featured Streep's most memorable roles in films like Postcards from the Edge, The Devil Wears Prada and Silkwood, Davis gave her friend a touching and memorable introduction.

Just before Streep took aim at President-elect Donald Trump in her speech, Davis spilled all the details on what being a friend of Streep's is like. "She stares. That's the first thing you notice about her. She tilts her head back with that sly, suspicious smile, and she stares for a long time," Davis began her speech.

She then revealed how a conversation usually goes with the legendary actress. One night when she made an apple pie, Streep interrogated her over which apples she used and if she made the crust herself. Well, according to Streep, if you didn't make the crust yourself, you didn't really make an apple pie.

"She is an observer and a thief. She waits to share what she has stolen, on that sacred place that is the screen," For Davis, Streep is a friend and an inspiration, an actress whose artistry continues to inspire her.

But even for Davis, who has become a good friend of Streep's, she remains in awe of the actress. She revealed that even she was too intimidated to tell her how much she means to her when they filmed "Doubt" together, so she took the opportunity during her tribute: "You make me proud to be an artist. You make me feel that what I have in me — my body, my face, my age — is enough."