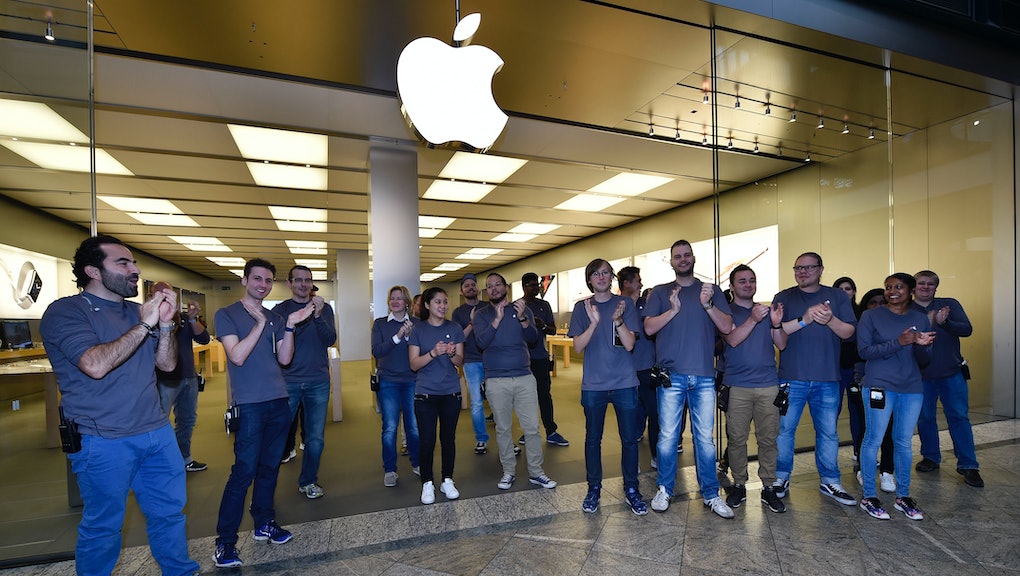 Ten years ago today, Steve Jobs hoisted the shiny rectangle, now considered by many to be a vital organ outside of the body, into the spotlight. We've watched the iPhone grow (and grow and grow) since its big debut. It's been through a lot!

Here we are 10 years later, and we continue to guess what form the next iPhone will take. And some of the rumors are straight-up bananas. A phone with a gaming controller that can explode out of the home button? Stop. A phone that fucking clips onto your clothes? Go home. These are the dumbest iPhone rumors that, given another decade, will likely still be dumb iPhone rumors.

An Apple patent points to an iPhone that can fold in half like a clamshell thanks to "carbon nanotube printed circuits" that afford it the flexibility to bend in half. We love to wax poetic about the days of flip phones, and some companies have teased the possibility of releasing a modern flippable device — but it doesn't happen. Why? Because while the hang-ups of the past were more satisfying, a bulkier (and likely pricier) phone designed to open and close like a book for the sake of catering to nostalgia is, well, silly.

Do you ever slip your iPhone into your back pocket and think: This would be so much easier if I could just wrap this machine around my wrist? Apple has patented an iPhone with a bendable screen. Ten years ago, Steve Jobs debuted the rectangle that would change our lives. By 2027, it's unlikely Tim Cook will tarnish Jobs' legacy by walking up to the stage in San Francisco and flinging the device onto his wrist like a slap bracelet.

Mario is finally available on our iPhones, and that's a beautiful development. But transforming the home button into an ejectable joystick button sounds like a headache. Not only would the iPhone likely be more susceptible to water damage with a huge opening in the front, but imagine all of the accidental triggers of the controller. Is that joystick mode or are you just happy to see me?

Ah, the Cinderella slipper of iPhone rumors. I will agree that the mock-ups of the bezel-free all-glass iPhone screen are sexy as hell, and reports speculate that Apple will unveil this glimmering feature in the iPhone's 10th-anniversary device. But an all-glass iPhone, beauty aside, could be a recipe for disaster.

The wildest iPhone rumors can often be traced back to an Apple patent, like this one! This particular patent pointed to an iPhone with a wraparound display. We've seen attempts at double-sided smartphones — like the YotaPhone — and to date, it remains to be seen that back-to-back screens are better than one.

Clips to your clothes

You have pockets. You have a backpack. You have a purse. You have hands. For the love of god, we do not need the ability to clip iPhones to our pants like a pager.

Reports suggested that Apple could move to a three-year cycle, debuting a new lineup of devices every three years, rather than the annual tradition. While a dip in public enchantment (and Tim Cook's paycheck) prove a three-year cycle may not be such a foolish idea, it's highly unlikely Apple will adopt such a strategy. More iPhones means more hype and money, baby.

Apple patented a feature that would allow the company to disable the iPhone camera if the device detected an infrared signal. The potential here is affording Apple the power to prohibit users from capturing photo or video in areas where it might not be allowed. While better guardianship over illegal photography isn't all bad, in the wrong hands, this tool could also prove wildly troublesome, like rendering your iPhone camera unusable in the event of a protest or attack.

There's a rumor that an upcoming iOS update may include a "Theater Mode" — a feature that would "disable noise and/or light emanating from wireless devices (such as at a movie theater)." What's touted as a solution to browsing your phone during a movie (you monster) is just making it easier to adopt the bad habit. A little less obnoxious, sure, but even a sea of more-dimly lit phones in a movie theater sounds like a damn nightmare.