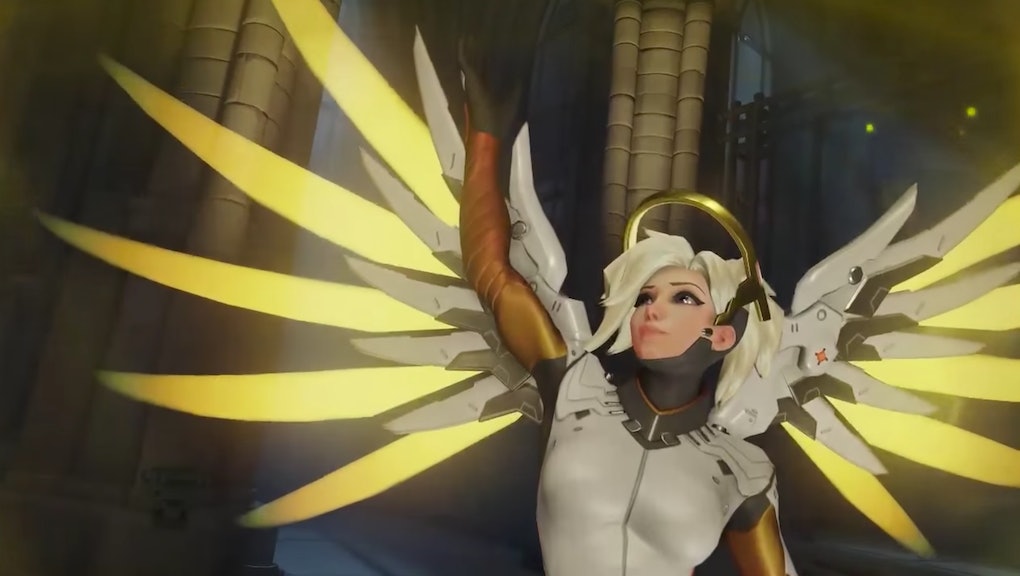 There's a new Overwatch couple in town, but it's not receiving quite the same level of fanfare that Tracer and Emily did in December. This time around, the spotlight is on Mercy and Genji — dubbed "Gency" — a pairing that was teased in the very same comic that revealed Tracer's girlfriend, but which has grown more prominent this week through some Valentine's Day-related voice lines allegedly uncovered on the public test realm.

If the rumblings of a Mercy/Genji relationship are new to you, here's some background to get you caught up.

In Overwatch, characters will often spontaneously interact with one another. One interaction that's received little attention occurs between Mercy and Genji when one of the two take damage. You can hear both interactions in the video below.

These are small interactions that are easily ignored, but it seems that Blizzard has been doubling down on this pairing recently. For example, there's an interesting hint at the end of the holiday-themed "Reflections" comic on the page where we get a peek at how the entire Overwatch roster is celebrating the holidays. In the first panel, Genji is writing a letter, and in the last panel, Mercy appears to be reading it.

Of course, Genji could have also just been whining for heals.

Earlier this week, Reddit user akhanubis said they found voice lines on the current build of the PTR that further fuel the possibility that Blizzard will officially pair up Mercy and Genji in another comic or animated short.

In the voice lines — which will likely play in the spawn room around Valentine's Day — the two characters offer each other chocolates. Here's the full transcription of the two exchanges, in case you can't listen to them:

"I got you some chocolates, Genji," Mercy says in their first exchange. "Swiss! They're the best."

In the wake of these leaks, the Overwatch fandom has spoken up, and one thing is very clear: A lot of players are not on board with Gency.

Overwatch Valentine's Day Voice Lines: Much of the fandom isn't on board

If you do a quick search on Twitter for "Gency," a vast majority of the reactions that pop up are pretty negative. Most of them depict Blizzard (and Overwatch writer Michael Chu) overly enthusiastically peddling a product that nobody's interested in.

It's hard to parse whether it's just a vocal minority that's against the pairing or whether it's truly the overwhelming consensus. But one thing's for sure, finding negative opinions toward Gency is not a difficult task. Of course, similarly negative opinions cropped up around the revelation that Tracer is in a same-sex relationship, though that backlash can be largely attributed to garden-variety homophobia.

Overwatch Valentine's Day: The Gency pairing has its fans, too

Despite its many detractors, there is quite a bit of pro-Gency art on Tumblr and Twitter, too. Here's a quick sampling.

If Blizzard adds more fuel to the Gency fire, Mic will keep you in the loop.