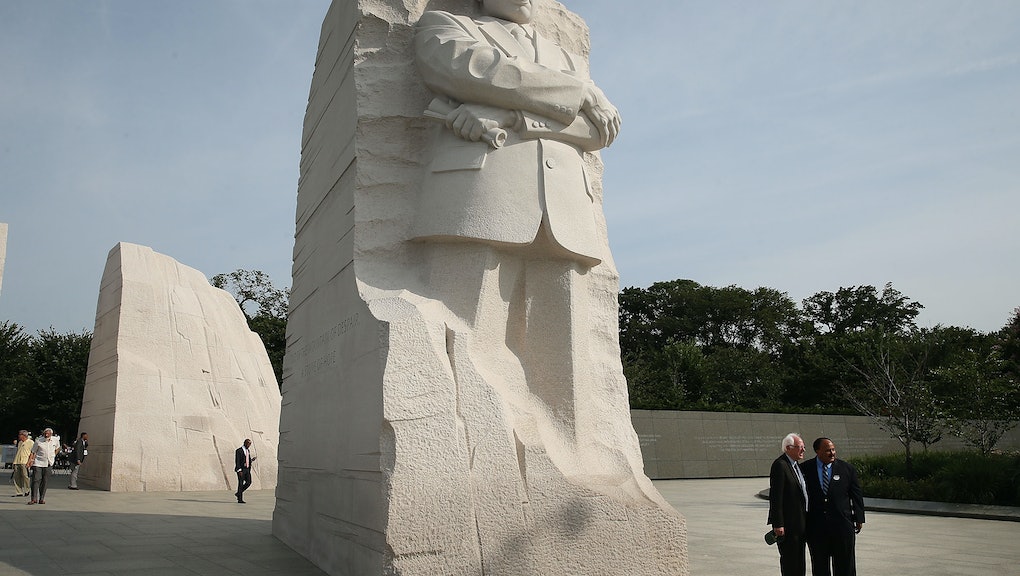 Tim Wise, the anti-racist author and educator, once said white America celebrated Martin Luther King Jr. "on their own terms, not his." As Wise wrote in a 2002 essay, "They accept part of the man, and part of his message, but not all of it."

King's profound "Dream" of an America, in which people are judged not by "the color of their skin, but by the content of their character," is only part of the story. King was a radical, tireless fighter for social justice — "one of the foremost threats to structural racism and inequality," as Jamil Smith put it in a 2016 New Republic article.

"As long as King's radicalism stays missing from our remembrances," Smith wrote, "it will be easier for people to lay claim to his story — even people who oppose everything King actually stood for."

According to the Root, King spoke on numerous occasions of America's "need to pay a long overdue debt to its citizens of color" and others who had been disadvantaged by historical wrongs.

In Why We Can't Wait, King cited the GI Bill of Rights — designed to help veterans who'd been "deprived of certain advantages and opportunities" — as precedent for a "gigantic Bill of Rights for the Disadvantaged, our veterans of the long siege of denial."

King was an anti-war activist who saw the war in Vietnam as linked to the struggle for civil rights. In his speech "Beyond Vietnam," King described the war as an "enemy of the poor" at home and abroad, and said poor whites and blacks were killing and dying "for a nation that has been unable to seat them together in the same schools."

"We were taking the black young men who had been crippled by our society and sending them 8,000 miles away to guarantee liberties in southeast Asia which they had not found in southwest Georgia and east Harlem," King said.

Further, he added, he could "never again raise my voice against the violence of the oppressed in the ghettos without having first spoken clearly to the greatest purveyor of violence in the world today — my own government."

He would go on to say, "A nation that continues year after year to spend more money on military defense than on programs of social uplift is approaching spiritual death."

In the weeks before his assassination, King was working on a new march on Washington dubbed the "Poor People's Campaign." King, who wanted to "confront the power structure massively," had linked economic and racial justice since before his Nobel Prize acceptance speech in 1964, when he said "debilitating and grinding poverty afflicts my people and chains them to the lowest rung of the economic ladder."

King believed the government should provide a guaranteed middle-class income — what would today be referred to as a universal basic income.

"We must create full employment or we must create incomes," King wrote. "People must be made consumers by one method or the other. Once they are placed in this position, we need to be concerned that the potential of the individual is not wasted. New forms of work that enhance the social good will have to be devised for those for whom traditional jobs are not available."

Dr. King received Planned Parenthood's Margaret Sanger award in 1966, an honor he wrote would "remain among my most cherished possessions."

King supported family planning throughout his life, and in his acceptance speech for the award — delivered by his wife, Coretta Scott King — he said there was "a striking kinship between [the civil rights movement] and Margaret Sanger's early efforts."

"We are natural allies of those who seek to inject any form of planning in our society that enriches life and guarantees the right to exist in freedom and dignity," King wrote in his speech.

Conservatives often point to King's Christianity as evidence of their ideological similarities. But the Baptist minister was a "radical" who "rejected forms of Christianity that favored peace without justice and complacency in the face of immorality," according to Rev. Osagyefo Uhuru Sekou, a King scholar.

In "Letter from Birmingham Jail," King criticized churches for staying silent in the face of racial and economic injustice.

"In the midst of a mighty struggle to rid our nation of racial and economic injustice, I have heard many ministers say: 'Those are social issues, with which the gospel has no real concern,'" King wrote. "And I have watched many churches commit themselves to a completely other worldly religion which makes a strange, un-Biblical distinction between body and soul, between the sacred and the secular."