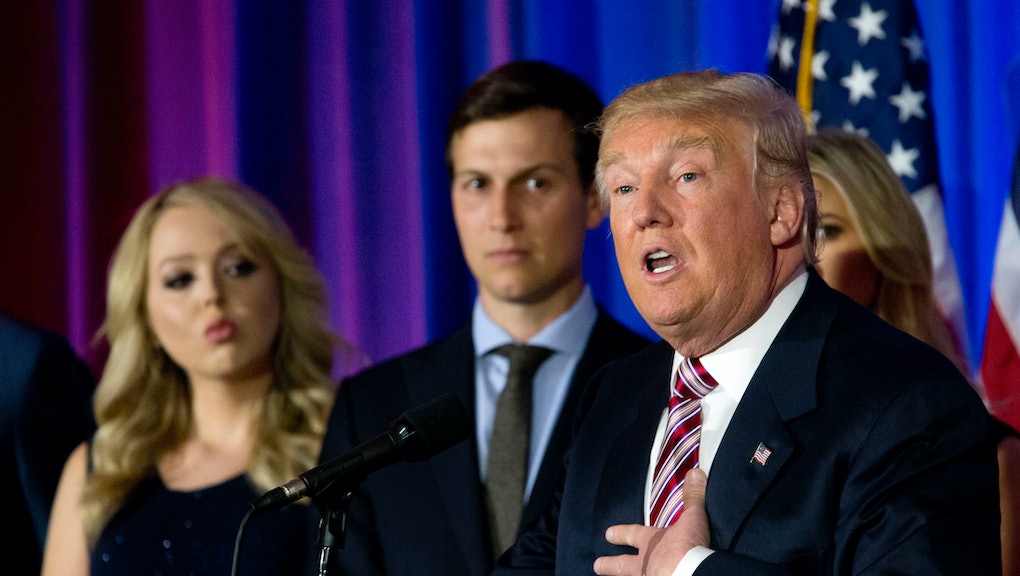 Jared Kushner's family: Here's what to know about the family history of Trump's son-in-law

When Donald Trump moves into the White House on Jan. 20, there will be more than one prominent New York family taking up residence in the West Wing. Trump’s son-in-law, Jared Kushner, will also be there, having been appointed to a role as a senior adviser despite possibly violating nepotism laws and a host of potential conflicts of interest.

Kushner, married to Trump’s eldest daughter, Ivanka, comes from a wealthy family of business moguls. Here’s some of what you need to know about the lineage of one of the most influential members of the president-elect’s inner circle:

His family got into real estate more than 50 years ago

According to a profile in the New Yorker, Kushner’s family came to New Jersey after the Holocaust and started a building company. Jared’s father, Charles Kushner, eventually built a Modern Orthodox school and named it after his parents, Joseph and Rae Kushner.

His father has had run-ins with the law

Charles Kushner was sentenced to two years in prison in 2005 for tax evasion and other crimes. Perhaps the most interesting thing here is the prosecutor in his case was none other than Chris Christie, the current Republican governor of New Jersey and another Trump cohort.

If you live in New York City, you’ve likely seen the ads for Oscar Health, a startup health insurance company. Oscar was founded by Jared’s brother, Josh Kushner. The company hasn’t exactly flourished and with Trump threatening to repeal the Affordable Care Act, things could get even worse for Josh Kushner.

His estranged uncle is also a developer

For a long time, the Kushners voted Democrat

Here’s another thing the Kushners have in common with the Trumps: The family used to belong to the other political party. Charles Kushner was a long-time Democratic donor and Jared Kushner’s company once paid Bill Clinton $125,000 to give a speech.