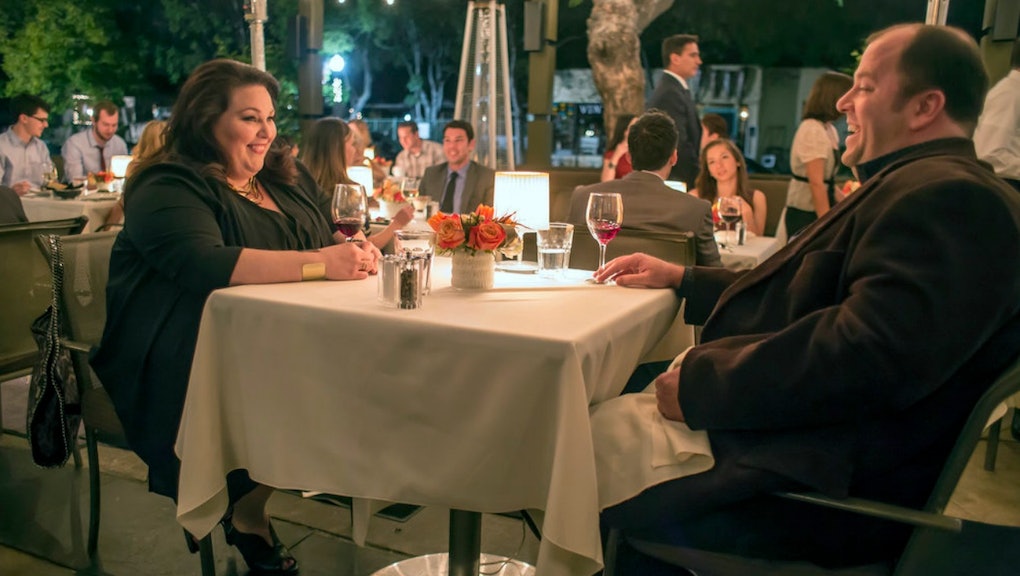 We have some questions about 'This Is Us'

This Is Us has been a surprise hit for NBC, drawing strong ratings and racking up nominations for awards. The story of the Pearson family, a multi-generational cast of characters that boasts Sterling K. Brown and Mandy Moore among them, keeps audiences coming back every week.

(Editor's note: Spoilers ahead for season one of This Is Us.)

That said, as much as we enjoy This Is Us, we also have some questions about it. Not about the plot; we can be patient and see what's coming next, now that we know that our beloved Toby is safe and sound. No, we've got some thoughts about the production of This Is Us — three, to be exact.

Why does "old makeup" Mandy Moore appear so infrequently?

So far, Mandy Moore has appeared as Rebecca in every episode through flashback sequences. But she also appears occasionally in present day, complete with old age makeup and an astonishing wig. It is a thing to behold, and it's a testament to Moore's acting on this show that she sells it.

Yet she doesn't appear much in the present, only showing up in five of the 11 episodes. She didn't show up in Tuesday's episode, despite being present when Toby collapsed at Christmas. This previously could have been explained away by Kate and Rebecca's fractious relationship, but they bonded in the midseason finale when talking about Kate's potential gastric bypass surgery.

Considering Moore is clearly around for the filming of these episodes, it's odd that she only slaps on the old-age makeup occasionally. Rebecca is, in many ways, the show's most fascinating character, with enough secrets (she knew Randall's biological father for years!) to disrupt her kids' lives in continual, fascinating ways. We need more of her in the present.

Why did Chrissy Metz not appear with other Pearsons (besides Kevin) before episode nine?

There has been quite a bit of sturm und drang around Chrissy Metz's role on the show. Most notably, Metz gave a quote (that she later walked back) that her contract mandated she lose weight along with her character, Kate. That entire situation is messy and unclear, but it's Metz's time on-screen that interests us a bit more.

For the first eight episodes of the show, Metz never appeared on screen at the same time as any other main cast member save Toby, portrayed by Chris Sullivan, and her brother Kevin, played by Justin Hartley. In one scene, she briefly talks on the phone with her other brother Randall, played by Sterling K. Brown, but their scenes were shot apart.

Part of this problem is that Kate lives in LA while, after Kevin's move to New York City, most of the characters live out east. In the eighth episode, however, Kate joins the family for Thanksgiving dinner, but is only seen talking to the family in a single shot, without any other cast members in the frame. It very blatantly looks like she wasn't there to shoot at the same time.

What makes this perplexing is that, come episode nine, Kate immediately gets lots of screen time with Randall, and she has a couple of big scenes with Rebecca in episode 10. Perhaps shooting schedules finally cleared up?

Will there ever be actual plot points to back up the twists?

Okay, so this is more of a gripe, but as compelling as the show is, it's hard to argue that much happens in it. The show's signature twists are all related to what happened in the past; in the present, the show's stories are about Kevin's play and Kate's weight loss. Even Randall finding his birth father, a powerful plotline, feels somewhat mired in the past.

It's fine that This Is Us enjoys shocking us with the characters' history. We want "old makeup" Mandy Moore to show up in the future and drop some more bombshells, frankly. But in addition, let's get some actual story material to support the twists and turns. Eventually, This Is Us will run out of past; these characters deserve futures, too.