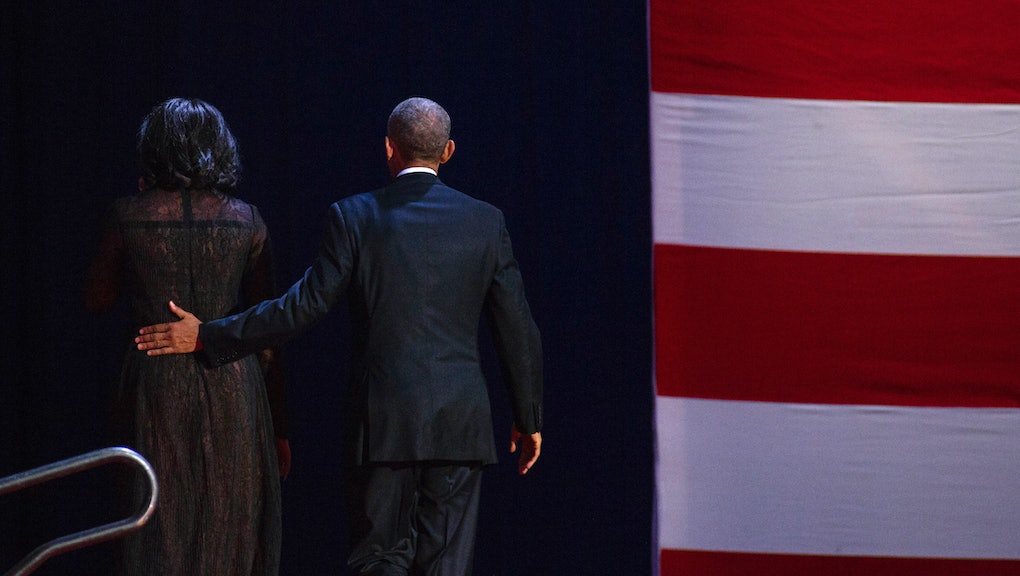 Tuesday night, president Barack Obama gave his farewell address to the nation. He stood dignified and hopeful, asking the world not to slow the fight for racial justice. Twitter responded to his speech, saying that the United States has never seen a president with more "decency and poise" and "dignity and strength."

All that sentimentality was just begging for someone to come and make it feel gross.

Cue @champagnepapi, the notoriously sleezy Instagram handle of one Aubrey Drake Graham. He jackknifed into the love fest with one of the most awkward posts of the night, sharing a photo of Obama with the Drake beard edited onto his face. "I will always carry your words and the memory of your time in office with me as inspiration," Drake wrote. "Big up yaself O."

It's groan-worthy at best, but a handful of fans and Drake watchers on Twitter were hilariously livid.

No one should be surprised at this comically conceited behavior.

First of all it's not even Drake's first time shopping his face onto Obama's. Drake did it for the "Energy" video back in 2015. The world ought to be thankful he didn't use that twisted screengrab, which can be seen below.

And secondly, when has Drake's public enjoyment ever been about anything but big upping himself? Every time he enjoys a new artist's song or style, the first thing he'll do is insert himself into that narrative. He does it either by jumping onto a Drake-ified remix — as he did with Migos' "Versace," Future's "Tony Montana," iLoveMakonnen's "Tuesday," Fetty Wap's "My Way" and most recently Dave's "Wanna Know" — or by sharing video of himself dancing to said hit.

He pulled that latter move on Kodak Black's "SKRT," posting a little Instagram of Drake's signature cheese steps. Black wasn't impressed. "You trying to show me you fuck with me or what?" he said in a video interview with BET. "We ain't never talked on the phone though. Like, he was texting me and shit. I'm direct with it, so if you're trying to show me that you fuck with me, call me. Throw me on your album so I can get me some royalties."

Drake's little insertions aren't about that though. He has to be seen nodding along with the movements of pop culture. Because if Drake witnesses a culture moment and his beard can't be spotted in anyone's mentions, did Drake witness it at all? There's no room for doubt in the Toronto jungles.