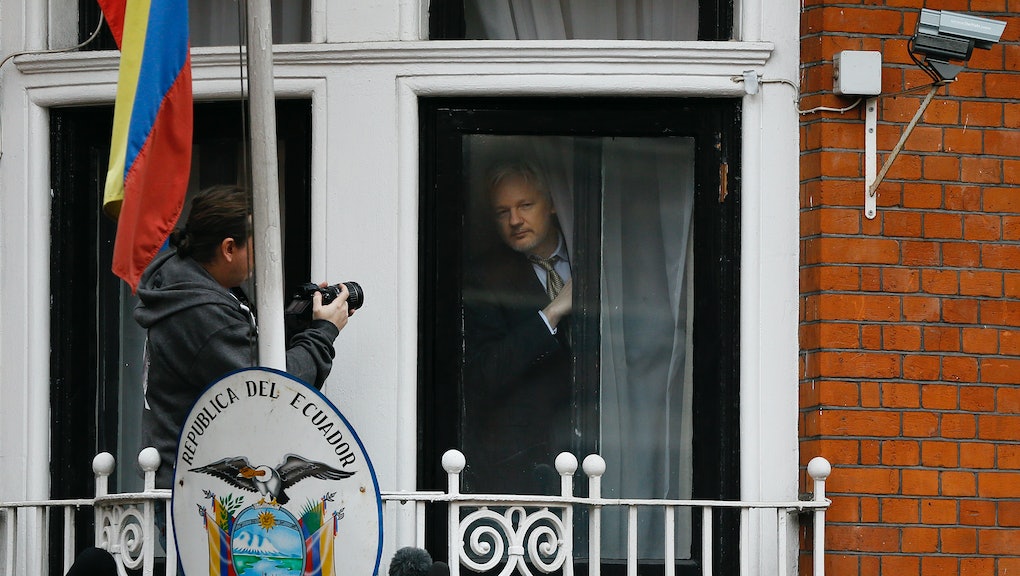 WikiLeaks used to be a champion for transparency. Now it champions Donald Trump.

Never mind that it was revealed today that Chelsea Manning — who went to prison for giving documents to WikiLeaks — could have her sentence commuted by President Barack Obama, WikiLeaks is busy discrediting an attack against President-elect Donald Trump.

When BuzzFeed published an unverified, document alleging the Russians have a secret tape of Trump watching sex workers engage in "golden showers," WikiLeaks came out swinging to defend Trump.

"WikiLeaks has a 100% record of accurate authentication," the group said on its Twitter account. "We do not endorse Buzzfeed's publication of a document which is clearly bogus."

Buzzfeed has taken a lot of flack for publishing the document, but WikiLeaks' contention isn't merely that the information contained in it is unverified. Instead, they're claiming it's illegitimate — an attempt to discredit a report which might hurt Trump.

WikiLeaks' patently strange attack on others publishing leaked documents in circulation among Washington power brokers comes on the heels of a bad night for founder Julian Assange. An "Ask Me Anything" session on Reddit drove Assange to silence over his betrayal of WikiLeaks' core values and the possibility that WikiLeaks' is technically compromised at the foundational level. And it's just the latest episode of ethical malfeasance which appears to be moving WikiLeaks away from its mission of asking "hard questions of government" and toward the mercenary work of propping up political candidates.

Ask me some things

The AMA session was a disaster. Diehard Assange supporters held him to account for why he never published damning material on Republican candidates — something a lot of people have noticed — and why he won't be transparent about his sources for the Democratic National Committee hack.

The most damning allegation in the exchange came when someone asked Assange to verify he was still in control of WikiLeaks by asking him to send a message using his private encryption keys, a rudimentary task. Assange refused, suggesting to the community that the group's founder has lost control of WikiLeaks at the fundamental, technical level.

"You are on record as indicating absence of the key is a signal of compromise, and now you refuse to prove you have the key," one of his accusers wrote.

"Put some effort into this bloody AMA Julian," one Reddit user said after it was clear Assange wouldn't address the most troubling allegations. "We're a large community that for the most part, had your back.

This sentiment is the final resting place of a truth long coming: Assange's coalition of support has largely crumbled, leaving behind only establishment conservatives — who once compared him to al-Qaida, and wanted him hunted across the globe as a terrorist.

How the Leaky have fallen

Five years ago, Julian Assange was a darling of the left, beloved considered a hero by warriors for privacy and transparency. Artists and prominent thinkers across the country — Noam Chomsky, Ai Weiwei, Daniel Ellsberg and Michael Moore, among others — lined up to commend him. He won peace medals. Academy Award-nominated actor Benedict Cumberbatch was lined up to portray him in a blockbuster film. Hacktivist group Anonymous coalesced largely around an attempt to protect WikiLeaks. Many supporters turned a blind eye to accusations against of sexual assault as an inconvenient externality, something best left for the courts.

And then, throughout the election, the tide turned on Assange.

Anonymous' biggest mouthpieces are lambasting him regularly for hypocrisy. The movie flopped. And the cadre of Snowden-affiliated lawyers and journalists which would naturally make up the bedrock of his support have either remained silent or have condemned Assange's new tactics.

When whistleblower Edward Snowden criticized Assange's methods — saying that "hostility to even modest curation is a mistake" even as he acknowledged WikiLeaks' value — WikiLeaks fired back viciously, accusing Snowden of opportunistic pandering to the establishment for a pardon.

Now, however, it's hard to know just where Assange is coming from. He's no longer taking questions. In other words, Assange would like his privacy, please.