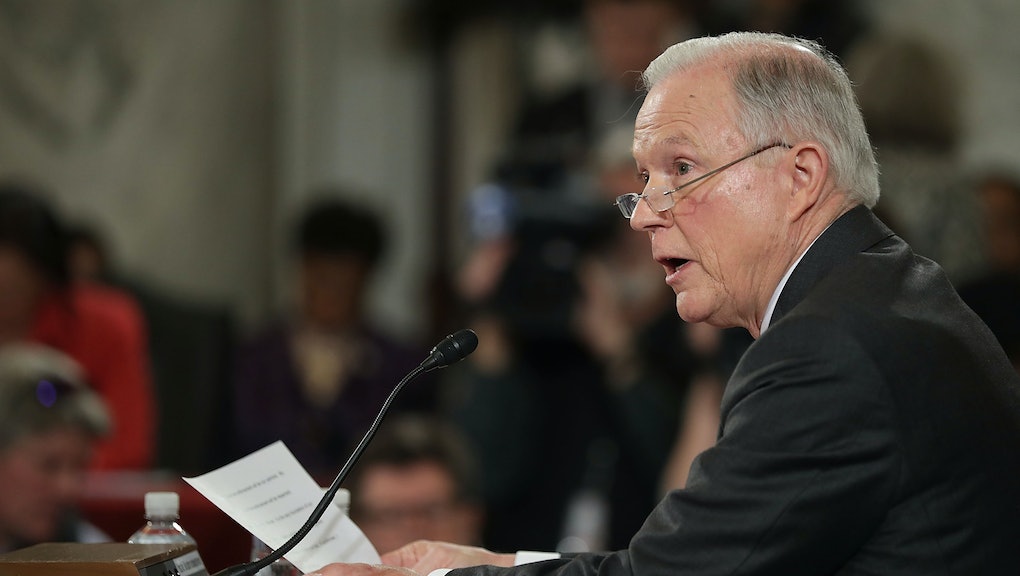 Among Sen. Jeff Sessions' crowning achievements is his involvement in the legal battle to prosecute black voters who allegedly cast fraudulent votes in the 1984 Alabama primary.

Sessions, then-attorney general of Alabama, left the prosecution to two assistants who argued three individuals had altered multiple ballots in a deliberate attempt to sway election results. The presiding judge threw out more than half the charges for lack of evidence before the jury even heard the case, according to USA Today. The jury later acquitted all defendants.

Vox reporter Jeff Stein tweeted a portion of a dossier distributed by the Trump team, citing an article from the Conservative Review titled "How Black Democrats Stole Votes in Alabama and Jeff Sessions Tried to Stop It."

The article claims "the left" has launched unfounded accusations of voter suppression at Sessions, using the 1984 case as a prime example.

"This is just another instance of so-called 'progressives' going all out to protect their own — even when the victims are black voters," wrote Hans von Spakovsky for the Conservative Review.

The defendants, which included Martin Luther King Jr. adviser Albert Turner, maintained they were simply trying to help elderly people of color — who couldn't physically get to the polls — cast their ballots.

"I thought that the prosecution was unwarranted and had no merit," Robert Turner, Albert Turner's brother, told USA Today in November. "I thought it was deliberately done to dissuade black people from voting. I don't think [Sessions] did it for a just cause."

Sessions has continued to underline the prevalence of voter fraud in the United States, despite the phenomenon amounting largely to a myth. Given his track record on the issue, some senators doubted Sessions' ability to justly serve minority populations.

"How any black person would be able to feel they are going to have impartial justice from Mr. Sessions is beyond me," said Sen. Howard Metzenbaum.