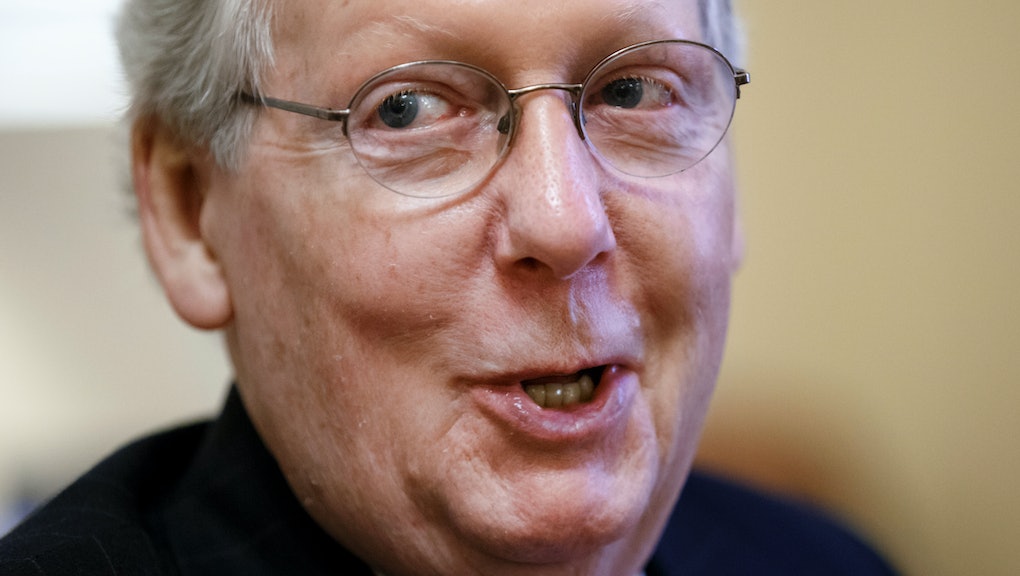 What is vote-a-rama? 3 important takeaways from 2017's congressional voting spree

Now imagine Mitch McConnell is there.

That, friends, is vote-a-rama, the annual Senate voting marathon that began around 6:30 p.m. Eastern Wednesday evening and stretched past 1 a.m. Thursday morning.

Each year the Senate considers a budget resolution — "essentially a blueprint for Congress," as the New York Times put it. During this process, senators are allowed to propose as many amendments as they wish, which the Senate can vote on in quick succession. The result is a process that can carry on through the night — sometimes for 10 hours or more.

What happened in this year's spectacle?

Around 1:30 a.m., the Senate voted 51-48 to approve a measure Republicans will use to repeal the Affordable Care Act, with a simple majority of 51 votes rather than a supermajority of 60.

With the GOP controlling 52 seats in the Senate and holding control over the House, the resolution would seem to make the dismantling of President Barack Obama's signature legislation inevitable.

...but are still figuring out how to replace it.

Republicans may have taken their first step toward repealing the ACA during the vote-a-rama, but they remain divided on how to replace it.

President-elect Donald Trump has called on Congress to repeal and replace the ACA essentially immediately, and Senate Republicans gave themselves a Jan. 27 deadline to repeal the law and draft new legislation. That was evident during the all-night session, with five Republicans backing a measure to push back the date to repeal the law. The senators dropped the measure after receiving "assurances" that the Jan. 27 date was a placeholder and "is not set in stone," according to Sen. Bob Corker, a Republican from Tennessee.

But, as the New York Times noted, it will be "nearly impossible" for Republicans to in a matter of weeks "replace a health law that took nearly two years to pass," and some in the GOP have been concerned that the process is moving too quickly.

Republican Rand Paul was the only senator to break party lines, saying it would be "wise" to repeal it and replace it at the same time.

Part of the Republicans' anxiety about moving too quickly with the repeal process stems from the fact that they own this issue now and do not want to be blamed for leaving Americans uninsured.

During the marathon voting session, defenders of the Affordable Care Act rebuked Republicans for attempting to repeal the health care law while having, as Sen. Bernie Sanders put it, "no idea how they are going to bring forth a substitute proposal." New York magazine reported that Democrats did not come away empty-handed, as many Republicans were forced to go on the record against popular elements of the 2010 health care law.

Though they can repeal the law with just 51 votes, Republicans need a supermajority of 60 to pass a replacement, which may render impossible Trump's ambition to repeal and replace the ACA "essentially simultaneously."  In such a case, some Republicans' fears of being blamed for health care chaos could be realized.

"It's that old thing of going into a china shop," House Minority Leader Nancy Pelosi told reporters on a January 2 call with top Democrats. "You break it, you own it."