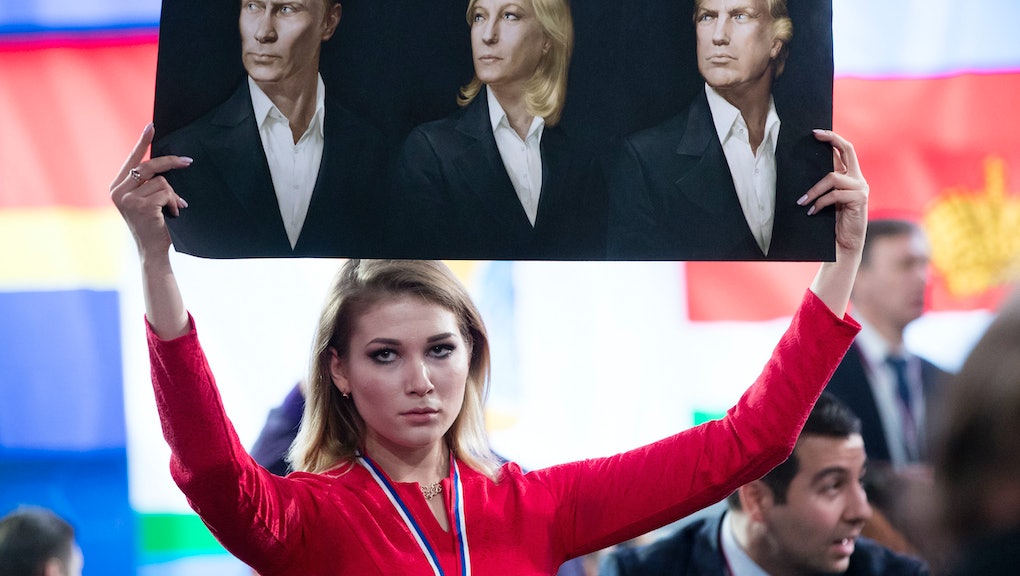 Marine Le Pen, leader of the French National Front, dropped by Trump Tower Thursday, though she reportedly wasn't stopping in for a chat with the president-elect.

A pool reporter assigned to cover Donald Trump approached Le Pen and "asked whether she was here to meet with PEOTUS and she declined to answer," per an email.

"Asked if she was here in a professional or personal capacity and she declined to answer," the reporter noted. "Asked whether she would come speak to the pool later and one of her associates said 'OK.'"

According to a Bloomberg report:

Donald Trump had no plans to meet with Le Pen, according to an aide to the president-elect, who asked not to be identified without authorization to speak publicly. Neither is she on Trump chief strategist Steve Bannon's schedule, a person familiar said. Le Pen's campaign chief of staff, David Rachline, said earlier that she was making a private visit to New York.

A later update from pool reporters identified the man to Le Pen's right as George Lombardi of the group Citizens for Trump and the man across from her as Louis Aliot, Le Pen's partner.

Later Thursday, Lombardi told poolers Le Pen was a personal friend and there was no attempt to put together a meeting between the National Front candidate and the president-elect:

We did not reach out to the Trump campaign. We did not reach out to Mr. Trump, even though he's a friend of mine. But I know very well his policy about not meeting foreign leaders and he had this policy all throughout his campaign. We know that, we respect that. We didn't ask him to meet her, we didn't go begging for any interview with anybody on the transition team because she was here to meet other people.

The Independent reported Thursday that a new first round election poll shows Le Pen ahead of presidential favorite François Fillon, but notes Fillon is "still expected to beat the far-right leader in a second round runoff in May."

The party was founded by Le Pen's father, Jean-Marie Le Pen, who, according to PBS, "famously described the Holocaust as a detail of history." Marine took over the party in 2011 with the aim of "soften[ing] its image as one of the most extreme right-wing groups in Europe."

The National Front opposes France's membership in the European Union, which Great Britain, in the controversial and stunning Brexit referendum, voted to leave last year.

Trump, incidentally, has found an ally in one of the architects of the Brexit vote: Nigel Farage.