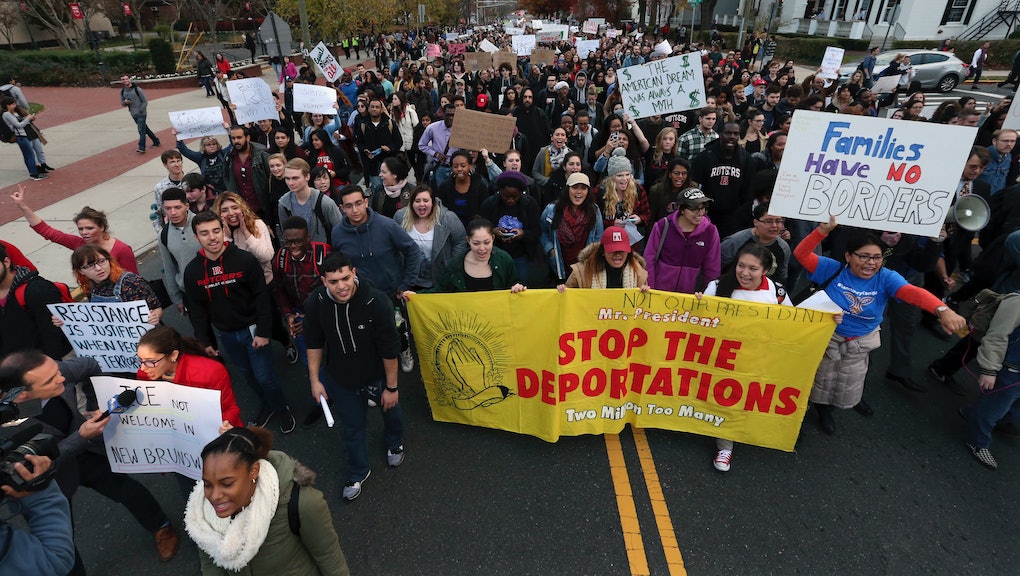 Will Trump make it legal for children of immigrants to become citizens?

In 2001, Sens. Dick Durbin, a Democrat, and Orrin Hatch, a Republican, introduced the Development, Relief, and Education for Alien Minors Act, a proposal that would allow children brought to the United States by undocumented immigrants a path to citizenship.

Though several states have created their own versions of the DREAM Act, the bill has never passed at the federal level — despite strong backing from President Barack Obama. Still, through the Deferred Action for Childhood Arrivals program, or DACA, the Obama administration has been able to provide temporary relief, but not a path to to citizenship, to undocumented people aged 15 to 30 who were brought to the United States as children.

Though it remains to be seen what the incoming Trump administration will mean for the DREAM Act and DACA, Trump's racist rhetoric and anti-immigration campaign promises have DREAMers and other immigration activists worried.

So, will Trump kill the DREAM?

How much of what Trump said on the campaign trail was bluster to get him elected, and how much of it will he actually follow through on?

Right now, it's difficult to tell.

During the campaign, Trump famously proposed deporting all of the roughly 11 million undocumented immigrants, before abruptly pivoting and suggesting he would only deport 2 to 3 million "bad hombres." He also outlined a plan to ban all Muslim immigration, triple the number of Immigration and Customs Enforcement agents and "terminate President Obama's two illegal executive amnesties."

But in his Person of the Year interview with Time, Trump said that "we're going to work something out" for DREAMers, providing no details of the plan other than to say that it would "make people happy and proud."

Will his administration enforce his draconian anti-immigration campaign promises? Or will they "work something out?" What does that mean? Those are the questions leaving millions mired in anxiety and uncertainties.

... but there's cause for alarm

Obama enacted DACA through executive order and Trump can easily reverse it, which Trump has promised to do. Details about those who have applied for DACA — including their home addresses — are also logged in a government database, which has caused some DREAMers to worry that it will be easier for the Trump administration to deport them.

Gen. John Kelly, Trump's pick to head the Department of Homeland Security, has appeared to break with the president-elect on some issues related to immigration. During Kelly's confirmation hearing, the general said that building a wall "in and of itself will not do the job" of securing the border and that the department does not currently have the capacity to deport all 11 million undocumented immigrants. But Kelly has been noncommittal in stating a position on DACA, and Sen. Jeff Sessions, Trump's nominee for attorney general, said during his confirmation hearing that he "would have no objection to a decision to abandon [DACA]."

Sessions has opposed the DREAM Act and said that it would be a "disaster" that would "reward and encourage" undocumented immigration.

Meanwhile, it seems Trump does intend to pursue his most famous campaign promise: to build a wall along the U.S.-Mexico border. He will apparently ask Congress to pay for it, though he maintains Mexico will eventually reimburse the United States — something both the current and former Mexican presidents have said would not happen.

At a post-election White House news conference, Obama urged the president-elect to "think long and hard before they are endangering the status of what for all practical purposes are American kids."

"These are kids who were brought here by their parents," Obama said. "They did nothing wrong."