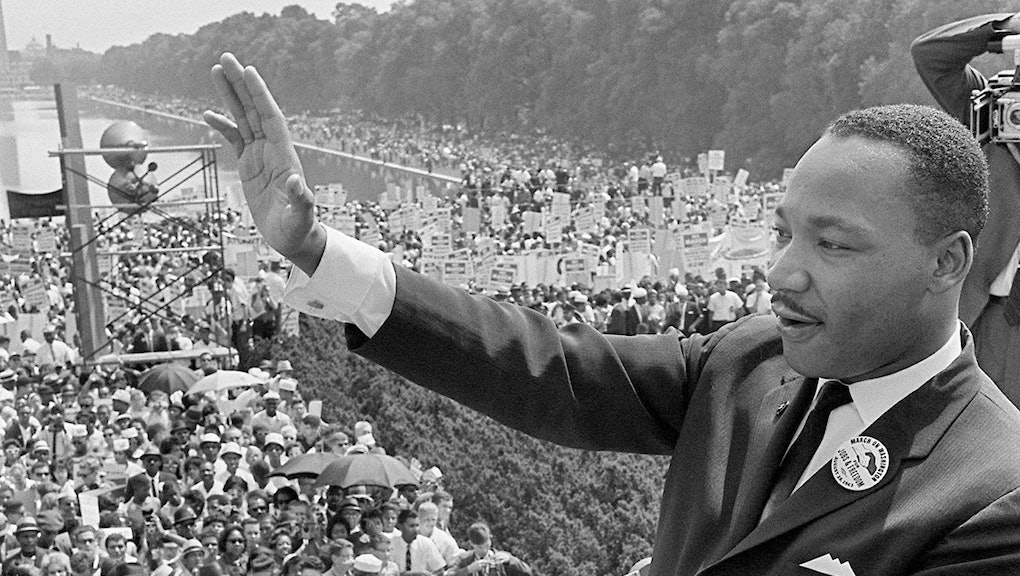 Had he not been assassinated in 1968, Martin Luther King Jr. would be 88 on Monday. While his life ended after being shot at the Lorraine Motel in Memphis, Tennessee, the power of King's words and the legacy of his fight for civil rights lives on. Even — and perhaps especially — today, King's teachings are an essential source of inspiration and empowerment. Here are some inspiring Martin Luther King Jr. quotes, from various speeches and writings throughout his life:

"Whatever your life's work is, do it well."

On Dec. 3, 1956, King delivered the opening speech for the Montgomery Improvement Association's first annual conference called the Institute on Nonviolence and Social Change. In the speech, titled Facing the Challenge of a New Age, King discussed how the civil rights movement was changing the narrative of black Americans. One portion of the speech, which King would later refine to become the Three Dimensions of a Complete Life, King focused on how being the best at what you do is important, regardless of the job you're doing:

"If it falls your lot to be a street sweeper, sweep streets like Michelangelo painted pictures, like Shakespeare wrote poetry, like Beethoven composed music; sweep streets so well that all the host of Heaven and earth will have to pause and say, 'Here lived a great street sweeper, who swept his job well.'"

"Love is the only creative, redemptive, transforming power in the universe."

In a sermon delivered at the Dexter Avenue Baptist Church in Montgomery, Alabama on Nov. 17, 1957, King said "the whole idea of love, the whole philosophy of love" is part of his "basic philosophical and theological orientation." In the sermon, titled Loving Your Enemies, King says, "it is love that will save our world and our civilization, love even for enemies."

"We must be concerned about every human being."

On June 2, 1959, King delivered the commencement address at Morehouse College. His address, titled Remaining Awake Through a Great Revolution, emphasizes the importance of focusing on improving the world for all, not just for ourselves:

"Rise above the narrow confines of our individualistic concerns to the broader concerns of all humanity. The individual or nation that feels that it can live in isolation has allowed itself to sleep through a revolution. The geographical togetherness of the modern world makes our very existence dependent on co-existence. We must all learn to live together as brothers or we will all perish together as fools. Because of our involvement in humanity we must be concerned about every human being."

While imprisoned at the Birmingham Jail for not obeying a ban on "racial demonstrations" in Birmingham, Alabama, King penned an open letter in defense of nonviolent protests, arguing:

We who in engage in nonviolent direct action are not the creators of tension. We merely bring to the surface the hidden tension that is already alive.

"Unarmed truth and unconditional love will have the final word in reality."

In 1964, four years before his assassination, King was awarded the Nobel Peace Prize for his "nonviolent campaign against racism." In his speech, which he accepted "on behalf of a civil rights movement which is moving with determination and a majestic scorn for risk and danger to establish a reign of freedom and a rule of justice," King spoke of unconditional love, hope, and the need to continue fighting for equality:

"I believe that unarmed truth and unconditional love will have the final word in reality. This is why right temporarily defeated is stronger than evil triumphant.

"Life's most persistent and urgent question is, 'What are you doing for others?'"

In 1963, King published a collection of sermons and speeches he had given called "Strength to Love." In the book, King includes a sermon titled "The Three Dimensions of a Complete Life." He would later give this sermon in 1967 at New Covenant Baptist Church in Chicago:

"An individual has not started living fully until they can rise above the narrow confines of individualistic concerns to the broader concerns of humanity. Every person must decide, at some point, whether they will walk in the light of creative altruism or in the darkness of destructive selfishness. This is the judgment. Life's most persistent and urgent question is, 'What are you doing for others?'"

"We must learn to live together as brothers or perish as fools."

One of King's most famous quotes came from a speech he delivered on April 28, 1965, while being honored at the Davenport Catholic Interracial Council's Pacem in Terris Peace and Freedom Award banquet.