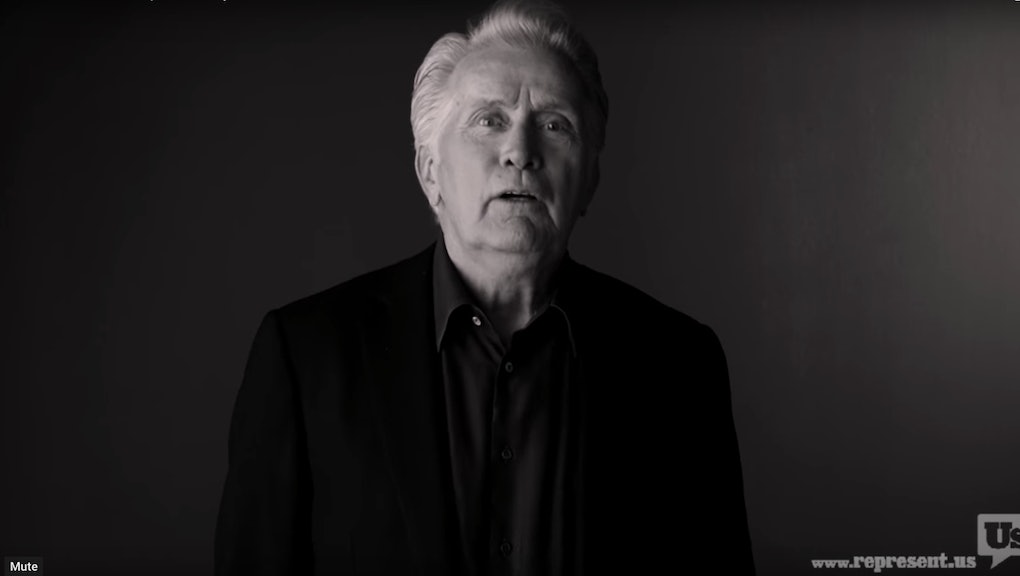 President Bartlet, aka Martin Sheen, warns of political corruption as Trump takes over the West Wing

President Bartlet is back.

Martin Sheen, who played Jed Bartlet, the fictional leader of the free world in The West Wing — Aaron Sorkin's Emmy-winning show which aired from 1999-2006 — has teamed up with anti-corruption campaign Represent.Us.

On Thursday, the campaign released an unscripted video of the actor discussing the corrosive effects of political corruption.

"The only problem with money in politics is that it leaves most of us out, and it creates a poverty of spirit in the whole nation," Sheen said in the short video

"[Buying elections] costs us our spirit, our soul, it damages our culture," he continues. "I want an America where everyone has an equal voice — not just the money interests."

The video comes just one week before inauguration day for real world President-elect Donald Trump, a president tarnished with more corruption scandals than any other in recent history.

Even some of his nominated cabinet members have similarly incriminating reputations. That's to say nothing of allegations Trump colluded with the Russian government, using its intelligence to help secure the election.

This is not the first time a former resident of The West Wing has emerged from fictional retirement to wield political influence. The show's mimetic and beloved press secretary C.J. Cregg (Allison Janney) — modeled off Dee Dee Myers, President Bill Clinton's press secretary and the first woman to hold the position — held a faux press conference in the White House breifing room in April.

Janney was in the real West Wing to champion efforts in the fight against opioid addiction.

Sheen ends his video by encouraging voters to be the vehicle behind ending political corruption. The movement, he concludes, could not be more urgent.

"More than any time in recent history, America's destiny is not of our own choosing," President Bartlet said in a speech 15 years ago that bears an eerie relevance to the current political landscape. "Yet the true measure of a people's strength is how they rise to master that moment when it does arrive."

Echoing the words of his dramatis personae, Sheen concludes with a similar sentiment: "One heart with courage is a majority. I think we need to be reminded of that — particularly today."