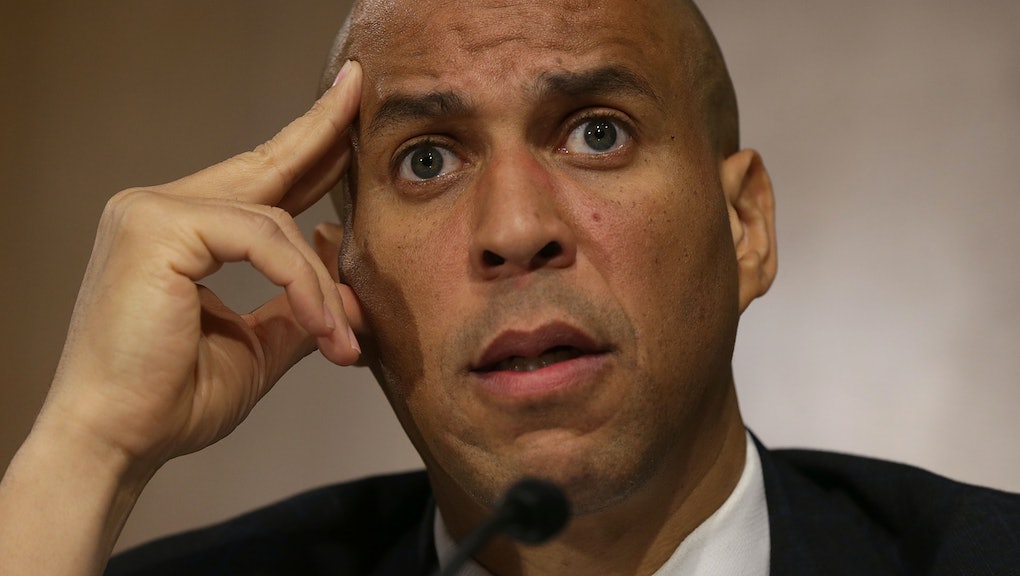 New Jersey Democratic Sen. Cory Booker came under attack after his Wednesday night vote against allowing the importation of cheaper drugs from Canada into the United States. The amendment to the budget resolution bill would have encouraged the importing of cheaper pharmaceutical products into the U.S. to lower prescription drug prices.

Those exorbitant price tags, which are set by pharmaceutical companies, are putting a financial crunch on families, according to a Consumer Reports survey. Spending on drugs is also taking a huge bite out of not only families' pocketbooks, but also government coffers — which could end up coming back to bite taxpayers again.

As the outrage grew online, Booker responded to questions about why he joined Republicans and a dozen Democrats in opposing the amendment sponsored by Sen. Amy Klobuchar (D-Minn.) and Sen. Bernie Sanders (I-Vt.).

Back in December, though, Booker voted to weaken federal safety standards that regulate whether a medication can be sold in the U.S. — in the name of broader consumer access to drugs, but experimental ones, not necessarily cheaper ones. The 21st Century Cures Act, which Booker vocally supported, passed with resounding bipartisan support and was signed into law last month.

The law promised government investments in cancer and Alzheimer's research, allocated funds to fight the opioid epidemic and contained a host of other measures intended to facilitate the modernization of the health care industry.

Among those steps was one to roll back the notorious gauntlet of Food and Drug Administration regulations in order to expedite the arrival of experimental medicine and medical equipment to market — with the idea of allowing Americans easier access to cutting-edge treatments for what ails them.

Despite the overwhelming support in Congress, critics were vocal about flaws in the bill — notably the roll back of FDA regulations that would benefit pharmaceutical and medical tech companies.

"Big pharma has its hand out for a bunch of special giveaways and favors that are packed together in something called the 21st Century Cures bill," Sen. Elizabeth Warren said during the debate over the law. "When American voters say Congress is owned by big companies, this bill is exactly what they are talking about."

Pulitzer Prize-winning journalist Michael Hiltzik wrote in a column for the Los Angeles Times: "Remarkably, nothing in the measure would address the main problem the public sees with the drug industry — excessive prices."

Booker's office defended the seeming contradiction between the votes.

There's a "big difference between adjusting FDA's requirements for medical products [and] experimental medications and a situation where you could have no FDA review of drugs at all," Jeff Giertz, a spokesperson for Booker, said in a phone call Friday.

"If the amendment had some more specifics on what it would have spelled out, in terms of a review process, that would have been something he supported," Giertz said.

Critics of the the 21st Century Cures Act, though, contended the inconsistencies remain rife.

"Twenty-first Century Cures was a greater threat to drug safety and efficacy than the import amendment," Maybarduk said, adding of Booker's objections to the amendment: "It could be legitimate drug quality concerns. But that argument is also used as a fig-leaf when an elected rep doesn't want to break with pharma."

As Jezebel noted, several of the Klobuchar-Sanders amendment's Democratic opponents have received large contributions from the pharmaceutical industry. Booker, for his part, has taken more political donations from pharmaceutical companies over the last six years than any other Democratic senator who opposed the import amendment, to the tune of $267,338.